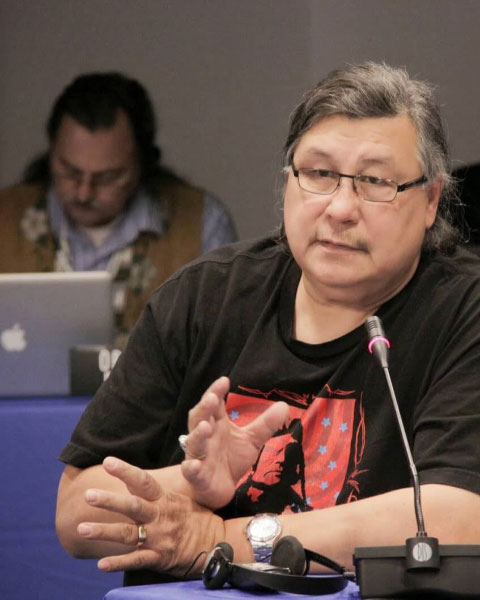 Ron is a citizen of the Beaver Lake Cree Nation, one of the Nations who entered into Treaty No. 6 in 1876. He has been a lifetime proponent of the Treaty, focusing on upholding and enforcing the Rights of the Indigenous Nations of Treaty No. 6 in Alberta, Saskatchewan, & Manitoba. Ron is a former Executive Director of the Confederacy of Treaty Six First Nations.

Ron was also active in each phase of the development of the UN Declaration on the Rights of Indigenous Peoples and has attended a majority of the sessions for the development of the OAS Declaration on the Rights of Indigenous Peoples of the Americas. He currently sits as Vice President on RAVEN Trust, an organization helping Indigenous Peoples in their fight against multinational and transnational extractive industries. He is also Secretary/Treasurer of the International Indian Treaty Council. Ron attended COP21 (Conference of the Parties) in Paris, France as an observer representing Beaver Lake Cree Nation, the Confederacy of Treaty Six First Nations and the International Indian Treaty Council.
Ron is trained in communications and has expert skills in both Cree and English. He has Co-Chaired many of the AoTCs in Alberta; in addition, he has Chaired or Co-Chaired most of the Treaties 1-11 Gatherings in the past two decades.
In his current position as Bilateral Treaty Coordinator, Ron is actively involved with the Elders and leadership of the Confederacy of Treaty Six First Nations and has spent over 40 years working diligently for Treaty Rights, Land and Natural Resource rights, environmental protection, traditional subsistence rights, cultural rights, children’s rights, health, and Self-Determination for Indigenous Peoples in Canada and around the world.