316 - Creating a New Vision for the Inpatient OR Internship Program 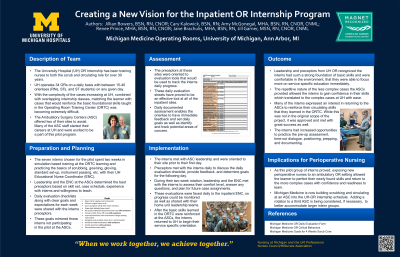 Description: The University Hospital (UH) OR at Michigan Medicine is part of the level one trauma center. There are roughly 120 RNs employed in UH OR, many of them graduates of the long standing internship program. Internships are held four times a year, with enrollment ranging between 5-14 nurses per session. RNs complete a rigorous 6-9 month orientation, learning to circulate and scrub in a variety of services.With intern groups overlapping, and the case complexity at UH OR increasing, it was becoming difficult to place interns in cases that would give them the exposure they needed to learn the basics. Placing a novice intern in less complex, smaller cases is best in an effort to increase confidence and skill set. OR leadership recognized an opportunity to utilize two of the ambulatory surgery centers (ASC) to assist with orientation. Seven interns were identified to spend two weeks at the ASCs learning the basics of scrubbing as part of a pilot group. Interns first spent two weeks in the OR training center learning and practicing the basics of scrubbing – gowning, gloving, standard set-up, instrument passing, etc. Leadership and the Educational Nurse Coordinator (ENC) at the ASCs determined the best preceptors based on skill set, case schedule, experience with interns, and willingness to teach. Daily evaluation checklists and a list of expectations were shared with the ASC staff.During the 2-week visit, leadership and the ENC met with interns to assess their comfort level, answer questions, plan for future case assignments, and gain their feedback.  Preceptors met with the interns daily to discuss the daily evaluation checklist, provide feedback, and determine goals for the following day. The checklists along with other pertinent information was shared with leadership/ENC back at UH OR.After returning to UH to complete their scrub orientation, the interns met with ENCs and leadership from UH and the ASCs to debrief. The interns unanimously stated they felt spending two weeks at an ASC better prepared them for the larger cases they saw when coming back to UH OR. Leadership and preceptors from UH OR recognized the interns had an increased confidence, were motivated, and were able to start learning the specifics of a case instead of needing to go over basic skills.The majority of the interns expressed an interest in revisiting the ASCs for their circulating orientation. This was not originally part of the orientation, but after discussing it among leadership and ENCs from both areas it was decided this would be beneficial. With the shorter cases at the ASCs, the interns had increased opportunities to practice the pre-op assessment, time-out dialogue, positioning, prepping, and documenting in the electronic health record.With the success of this pilot it was decided to permanently build scrubbing and circulating at an ASC into the internship schedule. Additionally, adding a rotation to a third ASC is being explored to better accommodate larger intern groups.