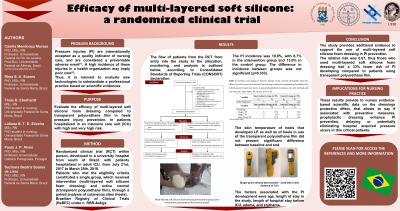 Introduction: Pressure injuries reach patients at all levels of care, resulting in high incidence and prevalence rates. Thus, it is relevant to evaluate new technologies to substantiate a professional practice based on scientific evidences.

Method: randomized clinical trial, developed in a university hospital from south of Brazil, with patients hospitalized in adult ICU, from July 21st, 2017 to March 25th, 2018. The sample consisted of successive entries of the patients that met the inclusion criteria, totaling 92 patients and 184 cutaneous sites. Randomization was performed for the heels: intervention group (multi-layered soft silicone foam dressing) and control group (transparent polyurethane film). After randomization and initial data collection (baseline), the intervention was performed according to each group. Data were entered into spreadsheets elaborated in the program Excel for Windows and analyzed by the program Statistical Package for Social Sciences version 21. Descriptive statistical analysis was performed according to the type of variable. To evaluate the primary outcome (PI), the incidence and relative risk were calculated. Incidences of each group were compared using the Chi-square test. For the variables of the skin microclimate on the first day (baseline) and the last (end), a Wilcoxon test was performed. Kaplan-Meyer test (survival analysis) was performed. To analyze the outcome variables between the groups with and without PI development, Student's t-test or Mann-Whitney U test was performed. To verify the association between the qualitative independent variables and the PI development, a Chi-Square or Fisher's exact test was performed. For correlation between the quantitative variables, Spearman's correlation was used. A level of statistical significance of 5% was used. Ethical aspects were observed according to Resolution 466/2012 of the National Health Council.

Results: The PI incidence was 10.9%, with 8.7% in the intervention group and 13.0% in the control group. The difference in incidence between groups was not significant (p=0.333). The skin temperature of heels that developed LP as well as of heels in use of the transparent polyurethane film did not present significant difference between baseline and end. The factors associated with the PI development were age, length of stay in the study, length of hospital stay before ICU, edema, and erythema.