38 - Evaluation of Interface Pressure on Support Surfaces in Intraoperative Period 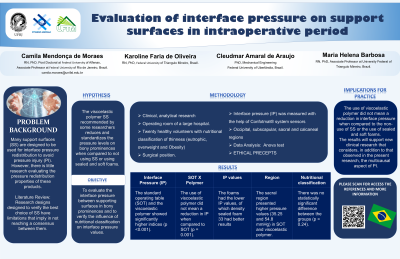 Description: Many support surfaces (SS) are designed to be used for interface pressure redistribution to avoid pressure injury (PI). However, there is little research evaluating the pressure redistribution properties of these products. Literature Review: Research designs designed to verify the best choice of SS have limitations that imply in not reaching a consensus between them. Hypothesis: This research hypothesizes that the viscoelastic polymer SS recommended by some researchers reduces and standardizes the pressure levels on bony prominences when compared to not using SS or using sealed and soft foams. Conceptual Framework The redistribution of the patient's body pressure is the main safety feature of positioning materials and its main objective is to avoid PI.

Objective: To evaluate the interface pressure between supporting surfaces in bony prominences and to verify the influence of nutritional classification on interface pressure values. Methodology: Clinical, analytical research conducted in the operating room of a large hospital operating room. Twenty healthy volunteers with nutritional classification of thinness, eutrophic, overweight and obesity participated. Participants were evaluated in the supine surgical position. Interface pressure was measured with the help of Confotmat® system sensors in the occipital, subscapular, sacral and calcaneal regions. Data Analysis: To verify the significant difference between the evaluated SSs, Anova test was performed. Results Regarding the interface pressure, the standard operating table (SOT) and the viscoelastic polymer showed significantly higher indices (p <0.001), with values ??higher than the capillary filling pressure. The use of viscoelastic polymer did not mean a reduction in interface pressure when compared to SOT (p = 0.001). The foams had lower interface pressure values, of which density sealed foam 33 had better results. The sacral region presented higher pressure values ??(35.25 mmHg and 54.8 mmHg, respectively) in SOT and viscoelastic polymer. About the foams, the calcaneus region presented higher values ??of interface pressure. There was no statistically significant difference between the groups of volunteers when considering the nutritional classification (p = 0.24). Conclusions /

Discussion: The use of viscoelastic polymer did not mean a reduction in interface pressure when compared to the non-use of SS or the use of sealed and soft foams. Perioperative Nursing Implications: The results will support new clinical research that considers, in addition to that observed in the present research, the multicausal aspect of PI.