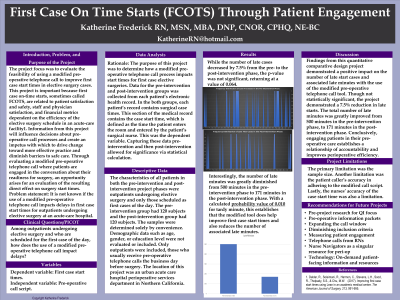 Background: Late starts in the operating room are a well-known factor relating to inefficiency in perioperative services, wasting resources including time, labor, and money. This project intervention was a modified pre-operative telephone call tool which sought to improve the number of late start cases. The purpose of this project was to determine how a modified pre-operative telephone call impacts first case start times. Pareto’s efficiency theory met operational needs of using finite resources efficiently, however incorporating Homans’ social exchange theory brought the patient in as a partner in their care.

Method: This quantitative pre- and post-intervention design methodology allowed for comparison of data. Previously, the clerk in the OR called the patient and read a list of instructions to the patient. The number of late cases and the number of minutes late in this previous methodology was used as the control. Baseline pre-intervention data was gathered over 4 weeks with the standard pre-operative telephone call tool. Then the new call intervention was implemented. The clerk was retrained by the researcher. In this method, developed by the researcher in an adaptation of the work by Gaucher et al. (2016) in France, there were not instructions but questions allowing for interactive dialogue. Post-intervention data with the use of the new modified pre-operative telephone call tool was gathered over 4 weeks.

Results: Statistical analysis was completed using a Student’s t test and demonstrated a modest 7.5% improvement in the number of late start cases, decreasing from 31 late start cases (out of 120) to 22 late start cases (out of 120), with a significance level p=0.064. The number of late minutes was found to be significant from the pre- to the post-intervention phases, decreasing from 500 minutes to 171 minutes, with a significance level of p=0.010. As each hour in the OR is billed at approximately $3000, the intervention has the potential to save hundreds of thousands of dollars in lost OR time, surgeon and anesthesia billed time, operating room and ancillary staff overtime, etc.

Conclusions: Implementation of this modified pre-operative telephone call tool significantly improves operational efficiency with $0 cost to the organization. The number of late cases were decreased, and the time saved was surprisingly compelling. The OR team did not discern a noticeable difference over the post-intervention time period. Data on staff overtime hours in the pre- and post-intervention phases would be very interesting to include into include in subsequent implementation. Future work might include the 72-hour pre-op calls, special concentration on same-day admit patients and those undergoing multiple procedures and/or who have multiple surgeons. Application in an ambulatory and procedural environment is also recommended.