306 - Implementing Surgical Smoke Evacuation: A Journey from Site to System 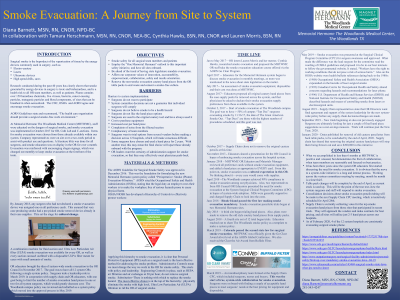 Description: Clinical IssueSurgical smoke is the byproduct of the vaporization of tissue by the energy devices commonly used in surgery including electro-cautery, lasers, ultrasonic devices, high speed drills, saws and other devices.  Research has shown that smoke generated by energy devices in surgery is toxic and bio-hazardous posing a health risk for all surgical team members and patients.Description of TeamDiana Barnett, Surgical Services Educator led the initiative to implement smoke evacuation throughout procedural areas of the Memorial Hermann The Woodlands campus. Cynthia Hawks, staff nurse in surgical services, and Lauren Morris, Surgical Nurse Resident, evidence based practice review of literature and product introduction. Memorial Hermann OR Council influenced policy change. Tamara Herschmann, Executive Service Line Director, was the champion for the initiative. Preparation and PlanningMemorial Hermann The Woodlands Medical Center procedural staff members were educated on the dangers of surgical smoke and smoke evacuation was implemented for the Operating Room, Cath Lab, and Labor and Delivery in October 2017.  Items for smoke evacuation were chosen from products available within the hospital system. A literature blitz was done for all surgeons with product representatives on site to assist with device choices. Smoke evacuation education was posted through out the procedural areas. Surgical smoke evacuation was reinforced with encouraging signs for the season. By January 2018, surgeons who had not chosen  a smoke evacuation device had one assigned to their preference card. Smoke evacuation devices were available in all operating rooms. The expectation was set for smoke evacuation.AssessmentSmoke evacuation in the facility increased dramatically. Smoke evacuation became the norm rather than the unexpected. Smoke evacuation had been achieved in one facility. Smoke evacuation through out the system would be a health benefit for system employeees and patients alike.ImplementationIn  an effort to take smoke evacuation system wide, OR educators brought the idea of system-wide smoke evacuation to the OR Council in November 2017. Surgeons took a leadership role in March 2019, in cooperation with supply chain and OR educators. The Woodlands campus policy was reviewed and redrafted as a system policy sent through the approval process May 2019.Outcome Smoke evacuation was introduced and implemented on multiple system facilities. Smoke evacuation device usage has increased through out the system.  Risk of surgical smoke exposure for staff and patients decreased.Implications to  Perioperative NursingSafety practices started at one facility can be implemented on a larger scale by sharing the process throughout a system.  Nurses should not wait for someone else to make the change they want to see in their practice setting. Enlisting surgeons and executives in the process change increases the impact and sustainability of  change.