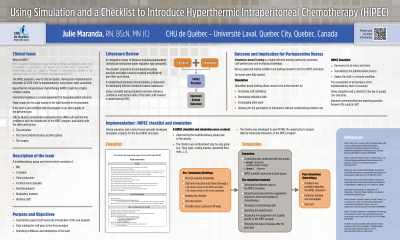 Description: Hyperthermic intraperitoneal chemotherapy (HIPEC) might be a highly complex sugery, with major impact on the usual routine of the staff involved in the procedure. If the team is not confident for the surgery it can affect the delivery of safe patient care.

Description of team A multidisciplinary group was formed which consisted of anesthesiologists, surgeon, RNs, clinical educators from hospital operating room (OR) and other ancillary staff.

Preparation/planning An integrative review of literature pertaining to standard checklist and simulation-bases education was conducted. The checklist is practical for standardizing safety practices and contributes to solutions. Standardized simulation design provides a framework for developing effective simulation-based experiences. Reflection of using a checklist and doing a simulation can lead to new interpretations by the participant. Clinical educators reviewed simulation scenarios from AORN website and adapt them to the HIPEC procedure.

Assessment A HIPEC checklist and simulation case was created. They were approved by the multidisciplinary group before the activity. The training was developed to give OR RNs the opportunity to acquire more skills by immersing themselves in the HIPEC procedure by doing a simulation while using a new checklist for the surgery. The simulation include: HIPEC checklist, personal protective equipment best practices while using chemo as well as organization during the surgery of supplies and steps. Before the simulation, participants were assessed on knowledge using a pre and post test.

Implementation A simulation was conducted. Staff were educated and trained through a 20 minutes video on the procedure, by reading the checklist and by peer discussions. The checklist poster has been posted in the operating room consisting of step by step instructions with illustrations before the simulation. During the simulation participants were placed in two groups. The first was the team members doing the surgery (scrub/circulator) and the other were observers. At the end of the simulation a debriefing were conducted and the participant’s reflective thinking were encouraged. Feedback was provided regarding the HIPEC simulation.

Outcome At the completion of the training, staff confidence increased, RNs mentioned they had developed their individuals skills. Using a standardized HIPEC checklist of the procedure decreases errors and stress. It facilitates RNs perceptions of the surgery by using it while a simulation.

Implications Practice simulation is a highly effective learning method in sustaining staff performance. The involvement of all of the multidisciplinary team is necessary and using the simulation and a checklist is a key to quality care outcomes.