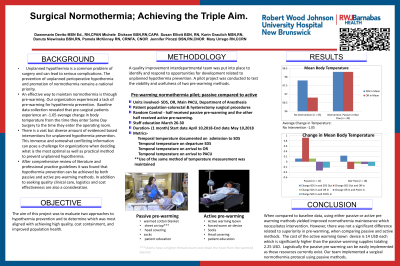 Description: Clinical Issue Our organization experienced a lack of pre-warming for hypothermia prevention in the Peri-operative setting. Team: Normothermia Task Force, SDS Nursing Staff, OR nursing StaffPrep& Plan: A comprehensive review of literature and professional practice guidelines was conducted. The aim of this project was to evaluate diverse approaches to hypothermia prevention to determine which was most aligned with achieving high quality, cost containment, and improved population health. Normothermia Task Force developed a plan to conduct a pilot project comparing active pre warming versus passive pre warming. The quality improvement team collected baseline data to establish the current state of normothermia prior to conducting the pilot project. They randomly measured N=55 temperature on arrival to SDS and temperature on arrival to OR. This data showed an average decrease in temperature of 1.05 degrees.Implementation: A pilot project was conducted to test the feasibility and usefulness of both pre-warming methods. The project was conducted in all perioperative departments. Passive pre-warming was provided using a warmed cotton blanket with a sheet on top, head covering, socks, and patient education. Active pre-warming was obtained with use of forced warm air Bair Paws Gown device and patient education. Sample population included all patients having colorectal or hysterectomy procedures. The sample population was evenly divided so that half received passive pre-warming and the other half received active pre-warming. A data collection tool was developed to measure - Temporal temperature documented on admission to SDS, temporal temperature on departure SDS, temporal temperature on arrival to OR and temporal temperature on arrival to PACU. The time frame was one month. Use of the same method of temperature measurement was maintained. All perioperative staff was educated and in-serviced on each method including equipment.

Assessment: Data collection was conducted for one month and our final sample size was N=30. 12 received passive pre-warming and 18 received active pre-warming. Data analysis showed that there was not a significant change in the mean body temperature from data point SDS admission and OR arrival. P = 0.09 not statistically significant due to sample size.When compared to baseline data using either passive or active methods yielded good normothermia maintenance with necessitates intervention.Outcome &Implications: After analyzing the data our quality improvement team decided that there was not enough clinical benefit ,related to superiority in pre-warming for hypothermia prevention, when comparing passive and active methods. The cost of the active warming Bair Paws Gown device is significantly higher than the passive warming supplies, and logistically the passive pre warming can be easily implemented as these resources currently exist.  We developed our Surgical Normothermia Protocol using passive pre-warming intervention.