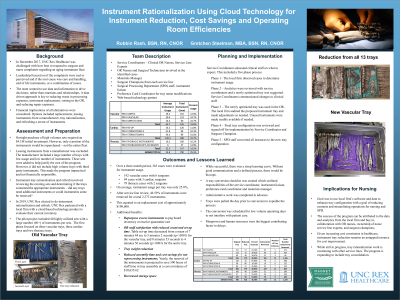 Description: In 2017, UNC Rex Healthcare was debating how to best respond to an increase in complaints from surgeons and nurses regarding instrument quality. Leadership tried to determine if the complaints were real or perceived and if the root cause was care and handling, aging instrumentation, or a combination of both issues. Leadership explored multiple options including repurchasing trays outright, leasing instrumentation from a manufacturer, or refreshing a portion of the instrumentation. Leadership considered the financial implications of all alternatives and wanted to use data and information to drive decisions opposed to emotions and relationships. Surgical procedures account for 50% of hospital revenue and approximately 60% of operating cost. On average, less than 20% of surgical instruments are used during a case. Given the complexity of physician preferences and variance of procedures, reduction of cost is extremely difficult and often nebulous. A data analytic approach to instrument trays has implications in efficiency within the operating room and sterile processing.  UNC Rex partnered with a Raleigh based firm with a cloud based technology product to evaluate their current inventory. The goal was to determine if the trays contained the appropriate instruments. The pilot project included 40 highly utilized sets with a large number of instruments per sets (40+). The pilot included trays 3 vascular trays, 3 cardiac trays and 2 thoracic trays. The pragmatic process included multiple steps:  evaluating the existing trays, auditing, proposing a revised tray, tray conversion with service line nurse and surgeon sign off, and post tray audits.  While the initial pilot is ongoing, the success with vascular, cardiac and thoracic surgery changes is evident. Over a three month period, 365 cases (192 vascular cases with 6 surgeons, 94 cases with 3 cardiac surgeons and 79 thoracic cases with 2 surgeons) were evaluated for instrument usage. On average, the instrument usage per tray was only 25.8%. After service line review, 46.59% of instruments were removed for a total 2.373 instruments. This equated to an outright repurchase price of approximately $190,600. In addition to cost savings, UNC Rex was able to repurpose the instrumentation to peg board inventory or to resolve missing from other trays. In addition, other nonmonetary, intangible benefits include: staff satisfaction due to tray weight reduction, OR reduced count and set up time (ex: mean of 7 min 44 seconds to 5 minutes 2 seconds), SPD satisfaction for reduced assembly time and cost savings for not reprocessing instrumentation, and decreased need for storage space. While the program was successful due to nurse line lead and physician champion buy in, there was a steep learning curve. A checklist was developed to define role and responsibilities of key stakeholders. Surgical volumes and manpower helped dictate conversion date - human resources . Administrative tasks were completed in advance.