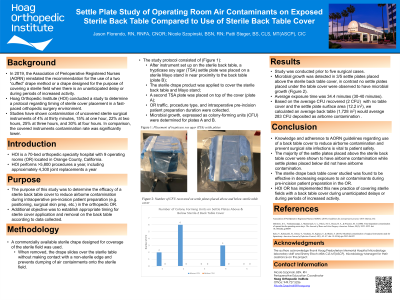 Clinical Issue: The Association of Perioperative Registered Nurses (AORN) in 2019, has recommended the use of a two-“cuffed”-drape method or a drape designed for the purpose of covering a sterile field when there is an unanticipated delay or during periods of increased activity. Constant monitoring of the covered sterile field during unanticipated delays is no longer required. Description of Team: This study was brought about by the idea of a perioperative staff nurse, Jason Florendo, RN, RNFA, CNOR; the Perioperative Nursing Educator, Nicole Szopinski, BSN, RN; to evaluate the amount of airborne exposure of a sterile field, from the time the field is open to time of incision, to determine the significance and efficacy of a manufactured sterile back table drape designed to cover a sterile field. The team in totality consisted of an perioperative staff nurse, perioperative nursing educator, infection preventionist, Patti Steger BS CLS MT (ASCP) CIC; and additional members of the operative team. Preparation and Planning: In order to provide data to the staff regarding the importance of covering the back table, data was presented regarding the increased risk of surgical site infection (SSI) after a certain amount of time a sterile table is exposed to air contaminants. We researched and found a sterile drape that was designed and designated for covering a sterile field. This drape, when removed from the sterile field, will slide over the sterile table without making contact with a non-sterile edge and preventing dumping of air containments from falling onto field. After meeting with the hospital infection perfectionist, it was determined we would conduct our own study to determine a protocol when to place a back table cover considering our average turn over time is less than 30 minutes. By collecting this data we would be able to determine a protocol when to apply and remove the cover. The data will be collected by placing a settle plate on the sterile field under the cover and another in proximity on top of the cover. The traffic in the OR, number of personnel, procedure type, location, and duration will be collected and analyzed. The number of microbial growths will be compared to the other collected data and an analysis will be made regarding the effect the cover has on the prevention of contamination. Once the data is configured, it will be presented to the department and a thorough protocol will be put into place.

Assessment: Before the study on the back table cover, the operating room (OR) did not cover the back tables or use a drape that was not manufactured to cover sterile fields during surgical delays. It was determined by leadership the team would comply with the new 2019 AORN Guidelines to minimize back table contamination. An audit and settle plate study was developed by Jason Florendo, a perioperative staff nurse, and Nicole Szopinski, the perioperative nurse educator. The audit measured the amount of traffic in and out of an operating room suite, the number of personnel in the room, the type of surgery, and the duration of time the settle plates were exposed to the environment. The settle plates after exposure were collected and sent to microbiology by Patti Steger, the infection preventionist. The results were obtained, reviewed, and analyzed by the perioperative nurse, nurse educator, and infection preventionist. Implementation: The staff were notified of the settle plate study and were educated on how to properly apply and remove the back table cover. After education was given, staff were evaluated on their understanding by demonstrating how to apply and remove the cover. In order to prevent possible contamination of the sterile field, we set up a separate sterile mayo stand that would not be used during the surgery. The settle plates were put in close proximity to the sterile back table and the study was conducted for at least thirty minutes and no greater than 40 minutes. Once incision was made the cover was removed and settle plates were collected and sent to microbiology. Upon receiving all the data, the perioperative staff nurse, infection preventionist, and educator met and a conclusion of the results were made. Outcome: Knowledge and adherence to the AORN guidelines regarding using a back table cover to help reduce airborne contamination is vital to patient safety. The manufactured sterile back table cover was found effective in decreasing the amount of time instruments are exposed to air contaminants and is applied and removed with proper sterile technique. The majority of the settle plates that were not covered by a sterile back table cover were shown to have airborne contamination while the covered settle plates did not have airborne contamination. Our OR has implemented this new practice of covering sterile fields with a back table drape during unanticipated delays or during periods of increased activity. Implications for Perioperative Nursing: Maintaining a sterile field is vitally important for the patient and the hospital. Orthopedic SSI are detrimental to the patient and very costly for the hospital. In our study, the use of back table covers during unanticipated delays or during periods of increased activity would decrease the amount of airborne contamination of the sterile field.  This project was intended to empower and promote the staff use of a back table cover and to refrain from opening a case sooner than necessary. This was also a method to show supportive evidence of how effective the sterile cover is and evidence to help gain administrative approval of cost. This project would promote nursing stewardship, best quality practice, and a change in policy and procedure.