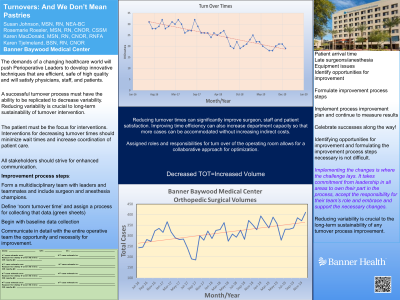 Description: In 2016 the Orthopedics service line established performance indicators for 2017 that defined Orthopedic turnover times. This created a challenging time to meet the target of less than 28 minutes with a historical 29-minute turnover time for orthopedics in 2017. In addition, there was an established stretch target of 22.7 minutes for the Orthopedic service line that was incorporated as an inclusion indicator for our surgeons. Knowing that this was a focus for operations, the leadership team quickly highlighted the goal of Orthopedic Turnover and incorporated rapid process improvements to achieve the defined goals. The operational processes for efficiencies for turnover time was incorporated to include all specialties in the service line. Engaging the team in perfecting turnover time quickly became a fun competition for the teams, often focusing on who could do it faster, better and safer. Removing barriers became the focal point in changing the perception of the surgeons and anesthesiologists in the idea of “business as usual”. Implementation of the improvement project has resulted in Orthopedic turnover times averaging 23 minutes which was a reduction of 6 minutes from the previous year. Our hospital has been branded the model for efficiencies in turnovers and our process has been implemented as best practice in 9 of our sister facilities.