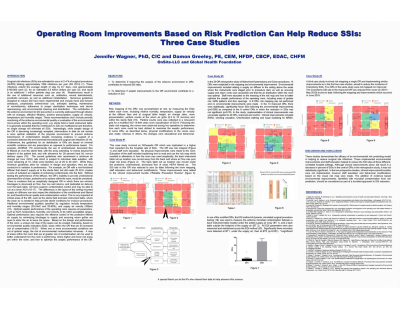 Description: Importance: The role of the operating room (OR) airborne environment in the incidence of surgical site infections (SSI) has ranked behind patient-specific and surgeon/perioperative team-related factors that impinge on risk for SSI.  Emerging evidence demonstrates that the design and performance of the OR impacts the airborne microbiome, importantly within the sterile field, and at tables where surgical instruments/implants are exposed.  However, the correlation between OR air quality and risk of SSIs continues to be challenging to define.

Objective: To determine if improving the asepsis of the airborne environment in ORs contributes to reduced SSI rates. Design: The performance of air delivery systems in fourteen operating rooms were evaluated using the Environmental Quality Indicator (EQI) risk picture method to identify potential improvements to airflow management that reduce airborne contamination and operating costs.  SSI rates for colon and abdominal hysterectomy procedures were tracked in these ORs for 39 months, before and after improvements were implemented.  SSI rates were also tracked for the same time frame in six control ORs, in which no improvements were made.  Airborne microbial data was collected. Setting: Twenty ORs in an academic medical center, Midwest USA. Participants: A convenience sample of all surgical patients, de-identified, in the twenty ORs studied. Exposures: Fourteen ORs were reconfigured to improve air velocity in and out of the sterile field, increased relative humidity, real time monitoring of temperature, pressure and humidity levels, reduction of overall air change rates, and staff education on the role of the environment in the potential transmission of contaminants. Main Outcomes: Incidence of SSI before as compared to after implementation of improvements.  The hypothesis was formulated during data collection.

Conclusion: Areas for environmental quality improvements in ORs was identified and mapped by relative risk of contamination.  Implementation of these improvements resulted in decreased airborne microbiological contamination and contributed to significant reduction in surgical site infections.