236 - Walking from Cleveland to Orlando: How Reducing Steps in Gathering Equipment Increased Amount of Work Hours Spent on Patient Care 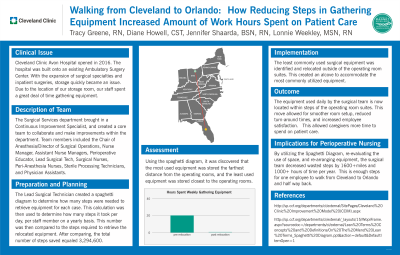 Description: Walking from Cleveland to Orlando:  How Reducing Steps in Gathering Equipment Increased Amount of Work Hours Spent on Patient Care Clinical Issue Cleveland Clinic opened a hospital in 2016 that was built from the ground up.  The hospital incorporated an existing ambulatory surgery center.  Very little additional space was added for storage of equipment.  With the addition of new equipment for inpatient surgical cases that had not previously been performed in the ambulatory surgery center, storage quickly became an overwhelming issue.  Due to the inconvenient location of the majority of the operating room equipment, staff was spending a great deal of time and distance walking to get equipment.  A suggestion was made to reorganize the storage of commonly used operating room equipment. Description of Team The surgery department developed a continuous improvement team that offered suggestions on making improvements in the department.  This team consisted of the nurse manager, assistant nurse managers, perioperative educator and anesthesia.   There was also front line caregiver representation from OR nursing, surgical technicians, preoperative and postoperative nursing, sterile processing and physician assistants. Preparation and Planning The surgical technician and operating room nurse on the continuous improvement team, performed a Spaghetti Diagram to visually display the routes that were taken each day to gather equipment that was stored far away from the actual operating rooms.  The number of steps per day, multiplied by the number of trips for each surgery, multiplied by the number of staff members taking the steps, equaled a total of 3,294,600 steps per year that the employees in the surgery department were taking just to gather equipment for each surgery. Assessment Using the Spaghetti Diagram, It was discovered that the most used equipment was stored the farthest from the operating rooms and the least used equipment was stored near the operating rooms.  Implementation The least used operating room equipment was moved to make room for the most commonly used equipment to be stored in equipment alcoves directly inside of the operating room corridor.  The equipment that only needed to be moved once a day was moved to a location just outside of the operating room doors.    Outcome The equipment that the surgery department employees use every day is now stored in a convenient location allowing for smoother room set up and turn over.  Implications for Perioperative Nursing By making a Spaghetti Diagram, re-evaluating the use of space and rearranging equipment, the surgical staff saved over 1600 miles of travel distance.  With 1600 miles divided by walking 2 miles per hour, this resulted in saving the staff 20 hours per week in just gathering equipment.  The amount of steps that were saved is equal to one staff member walking from Cleveland to Orlando and half way back each year.