48 - Evaluating Operative Times, Resource Use, and Costs of Barbed Suture for Total Knee Arthroplasty in China 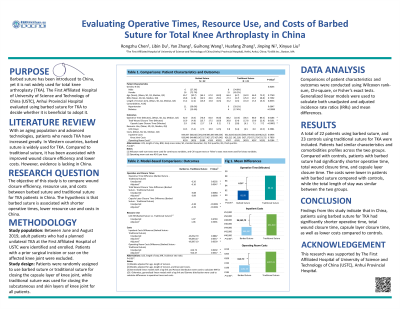 Purpose: Barbed suture has been introduced to China, yet it is not widely used for total knee arthroplasty (TKA). The First Affiliated Hospital of University of Science and Technology of China (USTC), Anhui Provincial Hospital evaluated using barbed suture for TKA to decide whether it is beneficial to adopt it.Literature Review: With an aging population and advanced technologies, patients who needs TKA have increased greatly. In Western countries, barbed suture is widely used for TKA. Compared to traditional suture, it has been associated with improved wound closure efficiency and lower costs. However, evidence is lacking in China.Research Question/Hypothesis: The objective of this study is to compare wound closure efficiency, resource use, and costs between barbed suture and traditional suture for TKA patients in China. The hypothesis is that barbed suture is associated with shorter operative times, lower resource use and costs in China.Methodology: Between June and August 2019, adult patients who had a planned unilateral TKA at the First Affiliated Hospital of USTC were identified and enrolled. Patients with a prior surgical incision or scar on the affected knee joint were excluded. Institutional review board approval was obtained prior to initiation of the study. Patients were randomly assigned to use barbed suture or traditional suture for closing the capsule layer of knee joint, while traditional suture was used for closing the subcutaneous and skin layers of knee joint for all patients. Data Analysis: Comparisons of patient characteristics and outcomes were conducted using Wilcoxon rank-sum, Chi-square, or Fisher’s exact tests. Generalized linear models were used to calculate both unadjusted and adjusted incidence rate ratios (IRRs) and mean differences.

Results: A total of 22 patients using barbed suture, and 23 controls using traditional suture for TKA were included. Patients had similar characteristics and comorbidities profiles across the two groups. Compared with controls, patients with barbed suture had significantly shorter operative time, total wound closure time, and capsule layer closure time. The costs were lower in patients with barbed suture compared with controls, while the total length of stay was similar between the two groups.