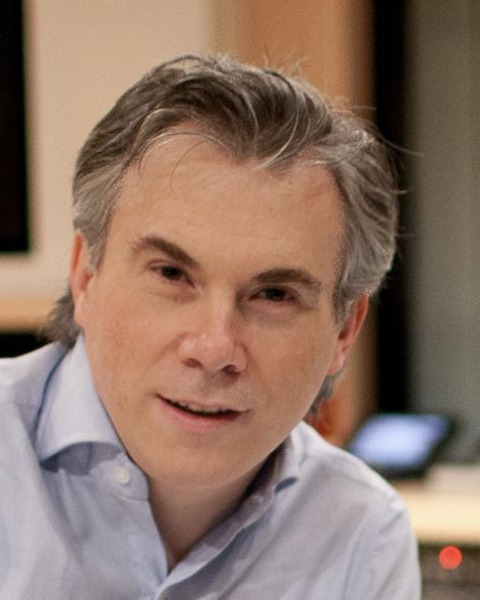 Wilfried Van Baelen, founder of Auro Technologies, is a renowned pioneer in the production of high-end Surround Sound for both music and film. He revolutionized the audio industry with his AURO-3D format, the first ever 3D Audio format with an end-to-end solution for all audio markets. Wilfried also coined “Immersive Sound” and “Immersive Audio” as the new generic term for “Surround sound with Height” adding the missing and final dimension in sound recording and reproduction.

Wilfried’s passion for sound is in the DNA of the AURO-3D format featuring scalable and compatible speaker layouts as well as ground-breaking technical solutions that allow easy integration and distribution within the existing standards on each market.
Wilfried studied at the Royal Conservatory of Antwerp, where he received 5 first prizes: Organ, Harmony, Practical Harmony, Solfege and Music History. At the age of 18, he built already together with his younger brother Guy, the first "Studio Galaxy" where Wilfried recorded and mixed his first synthesizer and pop albums, becoming a celebrated artist with gold records. He performed more than 850 concerts as soloist and as Musical Director from an international artist.

He decided to focus on his career as a producer-engineer, and in 1991 he developed his concept for the first interactive modular studio complex, Galaxy Studios. It opened in March 1995 and quickly became known as the most advanced facilities for music production in the world including the most silent recording spaces ever.

Wilfried produced and engineered more than 20 platinum awarded music albums. Out of a passion for film, he also mixed more than 20 movies of which Khadak (2006) earned him a special citation from the jury for "best sound for picture" at the Venice Film festival, where the film also won the Golden Lion Award.

Wilfried further developed Galaxy Studios into a leading film post-production facility also for picture, having installed already in the year 2006 a 4K DI workflow, equipped with 3D audio-post for film post-production, scoring, music recording studios, and mastering facilities. In 2009 Wilfried founded Mollywood, which is a film financing company specialised in film financing and tax sheltering with the aim to encourage production of audio-visual and cinematographic creation.