Introduction: Although the risk of the transformation of pancreatic cystic neoplasms to pancreatic cancer (PC) has been extensively investigated, prior study has been significantly limited by small sample sizes and selection bias, yielding highly variable progression results. Furthermore, due to these study limitations, it has been difficult to reliably identify novel risk factors and biomarkers for malignant
transformation, such as patient metabolic status.

Methods: Patients were sourced from the IBM Marketscan insurance claims databases, covering over 180 million patients from 2008 to 2017. ICD-9/10 codes were used to identify patients with low-risk pancreatic cysts. Patients with a history of worrisome features or prior pancreatic pathology were excluded. Patients were evaluated for at least two years following cyst diagnosis. Patients who developed PC or had surgery within 6 months of diagnosis were excluded. Kaplan-Meier analysis and Cox proportional hazard modeling were used to assess the risk of progression to PC and the association of progression with metabolic status. Results were standardized by age and insurance coverage.

Discussion: This is the first large scale, real world study of the malignant progression of low risk pancreatic cysts. Using significantly larger sample sizes than prior studies, results suggest that the risk of progression is small among patients with low risk cystic lesions, but increases linearly with time. The finding that new onset diabetes is associated with a significantly higher risk of progression, provides strong support for the inclusion of HbA1C, fasting glucose, and other markers of diabetes mellitus in cyst surveillance algorithms. 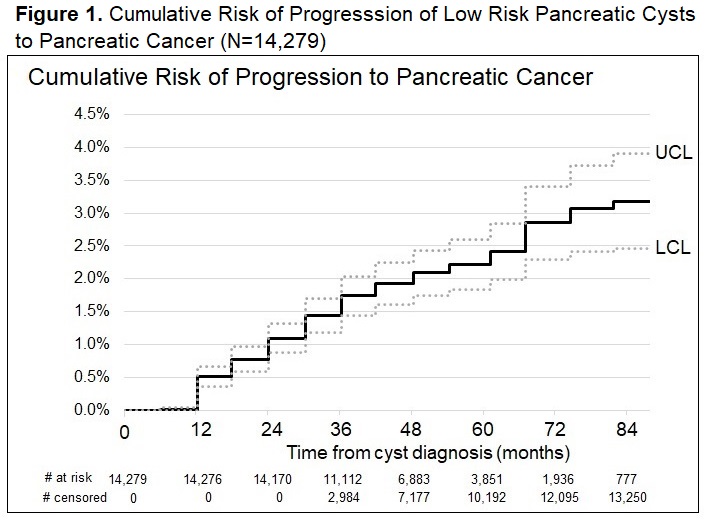 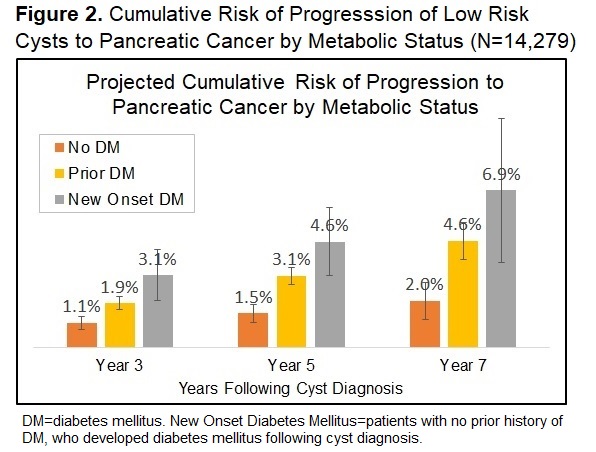