14 (S0004). - The Diagnostic Incidence of Pancreatic Cysts Nearly Doubled Over the Past Eight Years, Far Outpacing the Growth in the Use of Cross Section Abdominal Imaging

Introduction: Despite intensive study of pancreatic cysts, little is known about their epidemiology. Accordingly, the reported prevalence has ranged from 0.21% to 24.3%. Furthermore, studies regularly cite a recent increase in the incidental diagnosis of asymptomatic cysts, attributing this trend to the increasing use of abdominal imaging. Yet, these claims are based on small cohorts. Real-world data, with its large sample sizes, has become a powerful tool for studying the epidemiology of disease.

Methods: Patients were sourced from the IBM Marketscan claims database of over 200 million (M) insured patients. For each year, a study population of over 17M patients was selected, consisting of patients continuously eligible for benefits in that year and the prior two calendar years. Prevalent cases were patients who received a ICD-9/10 diagnosis of cyst in that year. Incident cases lacked a diagnosis of cyst in the preceding 2-year lookback period. The period prevalence denominator included all eligible study patients for
that year. The cumulative incidence denominator excluded patients with a lookback period cyst. To assess the “real-world prevalence” of asymptomatic cysts, the study population was narrowed to imaged patients with no history of cyst or other pancreatic pathology. Using 2017 as the reference, results were directly standardized by age and insurance coverage.

Results: From 2010 to 2017, the standardized cumulative incidence and prevalence grew from 6.3 to 11.4 per 10,000 and 8.9 to 18.7 per 10,000, corresponding with annual percent changes (APC) of 8.7% and 11.2%, respectively (Fig. 1). This would imply that 609K patients received a diagnosis of pancreatic cyst in 2017, of whom 371K were newly diagnosed. Among the 722K imaged patients in 2017 without a prior history of pancreatic cyst or pathology, the real-world prevalence was 2.0%, imputing an estimated 6.5 million U.S. patients with a cyst. Prevalence increased exponentially with age until age 65 (Fig. 2). The diagnosis rate was significantly higher among patients initially imaged with MRI vs.CT.

Discussion: This is the first large scale and standardized population-based study of the epidemiology of pancreatic cysts. The diagnosis of incident patients nearly doubled in the last 8 years, a growth rate that far outpaced the growth in the use of cross sectional imaging. The estimated real-world prevalence of pancreatic cysts is 2.0% and exceeds that diagnosed clinically by an order of magnitude. 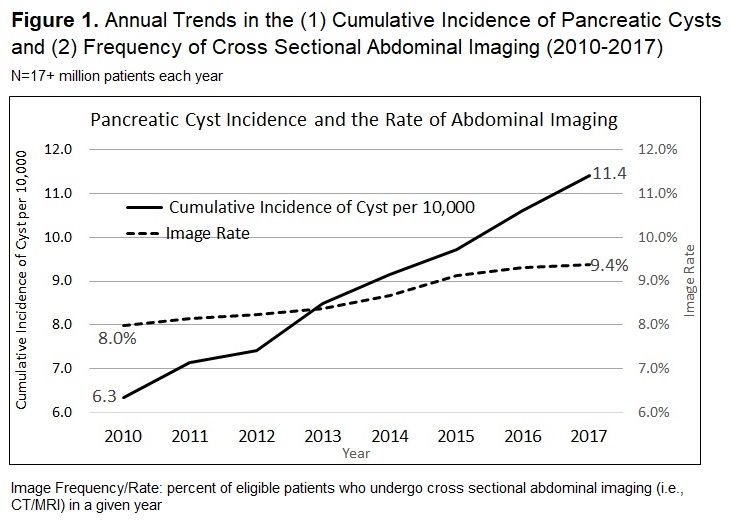