P1108 (S0471). - The Benefits of Time Spent in Nature on Symptoms and Quality of Life Among Patients With IBS 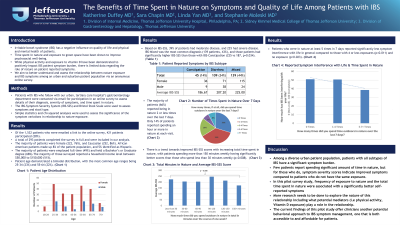 Introduction: Irritable bowel syndrome (IBS) can have significant impact on quality of life and physical and mental health. Time spent in nature has been shown to improve psychosocial well-being. Physical activity and exposure to vitamin D have been shown to positively impact IBS patient symptoms, but there is limited data about the impact of nature on reported symptoms. We aim to better understand the relationship between exposure to nature and IBS symptoms among an urban and suburban patient population.

Methods: Patients with IBS and who follow with our tertiary care hospital’s gastroenterology department were contacted via email for participation in an online survey to assess details of their diagnosis, severity of symptoms, and time spent in nature. The IBS-Symptom Severity System (IBS-SSS) and Bristol Stool Scale were used to assess symptoms and stool type. Simple statistics and chi-squared analyses were used to assess the significance of the symptom variations and relationship to nature exposure.

Results: Of the 1,532 patients who were emailed a link to the survey, 421 patients participated (28%). A total of 293 patients completed the survey in full and were included in our analysis. The majority of patients were female (222, 76%), and Caucasian (252, 86%). The most common age ranges were 25-34 (23%) and 55-64 (22%). Based on IBS-SSS scores, 39% of patients had moderate disease, 22% had severe disease. IBS-Mixed was the most common diagnosis (139 patients, 43%), and those patients had significantly higher IBS-SSS than those with IBS-Constipation (225 vs 187, p=0.034). The majority of patients (66%) reported being in nature 2 or less times over the last 7 days. Patients who were in nature at least 5 times in 7 days reported significantly less symptom interference with life in general compared to those with no exposure (p=0.023). There is a trend towards improved IBS-SSS scores with increasing total time spent in nature, with patients spending more than 150 minutes weekly having significantly better scores than those who spend less than 30 minutes weekly (p=0.008).

Discussion: Among an urban patient population, patients with all subtypes of IBS have a significant symptom burden. Few patients report spending significant time in nature, but for those who do, symptom severity scores indicate improved symptoms compared to patients without the same exposure. In this pilot study, frequency of exposure to, and the total time spent in nature were associated with significantly better self-reported symptoms. 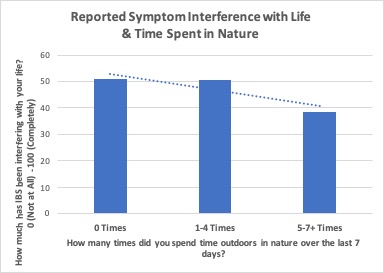 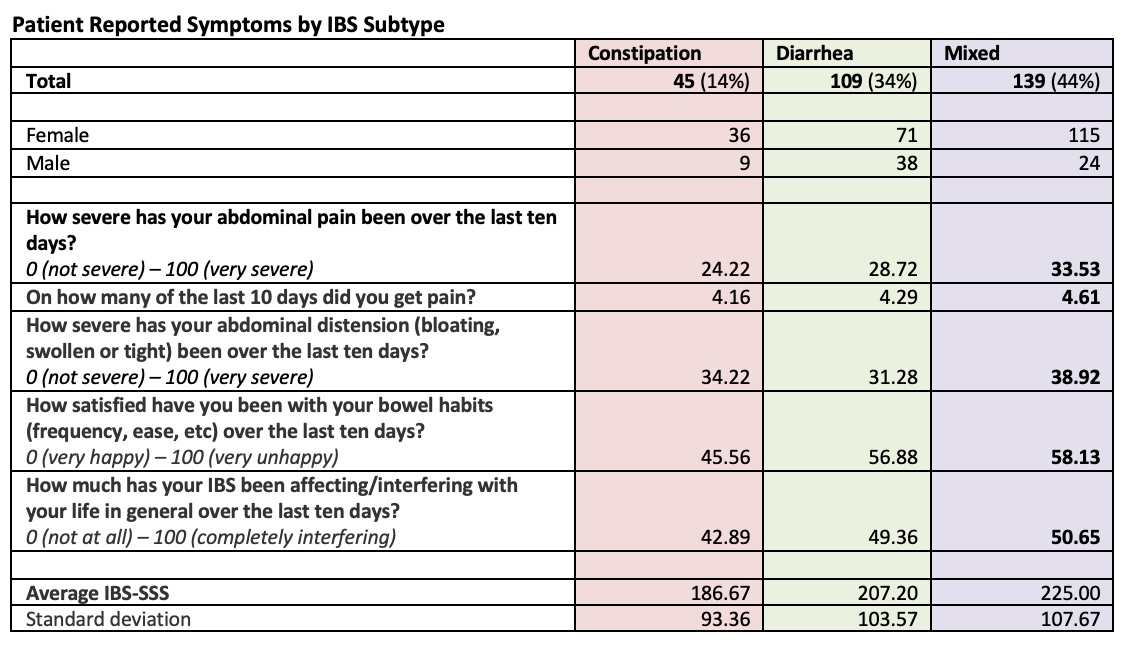