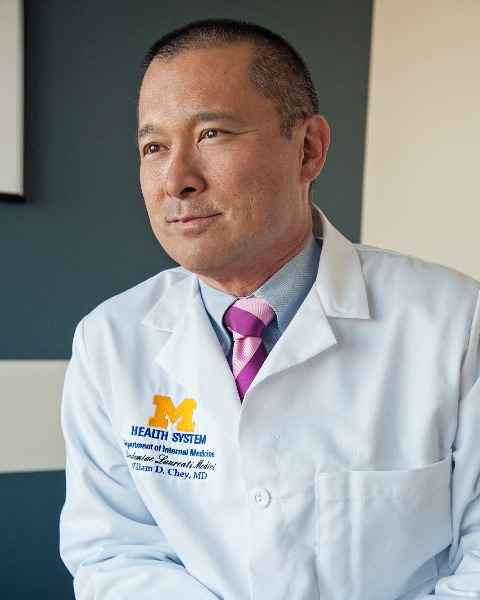 William Chey, MD, FACG, received his BA degree from the University of Pennsylvania, and a medical degree and training in internal medicine at the Emory University School of Medicine. He completed a fellowship in gastroenterology at the University of Michigan in Ann Arbor. Following fellowship, Dr. Chey has remained at the University of Michigan, where he is currently the Timothy T. Nostrant Collegiate Professor of Gastroenterology, Director, GI Physiology Laboratory, Medical Director, Michigan Bowel Control Program, and Director, Digestive Disorders Nutrition and Lifestyle Program. He was awarded a joint appointment in the Department of Nutrition Sciences in 2015. His research interests focus on the diagnosis and treatment of disorders of gut-brain interaction and H. pylori infection. He is a medical innovator and holds 4 patents. He co-founded "My Total Health," a company developing novel health information technology solutions for persons with GI problems. Dr. Chey has authored more than 350 manuscripts, reviews, chapters, and books. He served as Co-editor-in-Chief of The American Journal of Gastroenterology from 2010-2015. Dr. Chey is a member of ACG's Board of Trustees and the Board of Directors of the Rome Foundation. In 2014, Dr. Chey was inducted into the Clinical Excellence Society of the Department of Medicine, received the Dean's Outstanding Clinician Award, and was inducted into the League of Research Excellence at the University of Michigan. In 2015, he was inducted into the League of Clinical Excellence at UM and received the Distinguished Clinician Award from the AGA. In 2019, he received the Dean's Award for Innovation and Commercialization. In 2020, he was awarded the prestigious Berk-Fise award from the ACG.