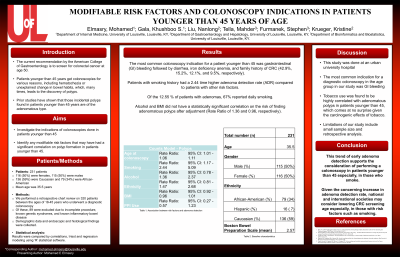 Introduction: The American College of Gastroenterology (ACG) has recommended screening for colorectal cancer (CRC) at age 50. Patients younger than 45 years get colonoscopies for various reasons, including hematochezia or unexplained change in bowel habits, which, many times, leads to the discovery of polyps. Prior studies have shown that a significant percentage of these polyps are adenomatous. In this retrospective study, we investigated the indications of these colonoscopies and any modifiable risk factors that may have had a significant correlation on polyp formation in patients younger than 45.

Methods: Data was collected on 320 patients, all younger than age 45, undergoing a colonoscopy at an urban university hospital. Of these, 89 were excluded based on specific exclusion criteria such as incomplete procedure, known genetic syndromes, and known inflammatory bowel disease. Of the 231 patients included, 116 (50%) were female, 136 (59%) were Caucasian, 79 (34%) were African American and 10 (4%) were Hispanic. We gathered data by retrospective chart review of patients’ colonoscopy reports and medical records. Continuous variables were summarized using median values and interquartile ranges (IQR), and categorical variables were summarized using frequencies and percentages. A linear regression model was used to see if modifiable risk factors such as smoking, alcohol, and basal metabolic index (BMI) had a correlation with polyp detection.

Results: The most common colonoscopy indication for a patient younger than 45 was gastrointestinal (GI) bleeding followed by diarrhea, iron deficiency anemia, and family history of CRC (42.9%, 15.2%, 12.1%, and 9.5%, respectively). In this study, patients with smoking history had a 2.44 time higher adenoma detection rate (ADR) compared to patients with other risk factors. Of the 12.1 % of patients with adenomas, 67% reported daily smoking. Alcohol and BMI did not have a statistically significant correlation on the risk of finding adenomatous polyps after adjustment (Rate Ratio of 1.36 and 0.96, respectively).

Discussion: Tobacco use was found to be highly correlated with adenomatous polyps in patients younger than 45. Additionally, GI bleeding was the most common indication to receive a diagnostic colonoscopy. Limitations of the study include small sample size and retrospective analysis. This trend of early adenoma detection supports the consideration of performing a colonoscopy in patients younger than 45 especially, in those who smoke.