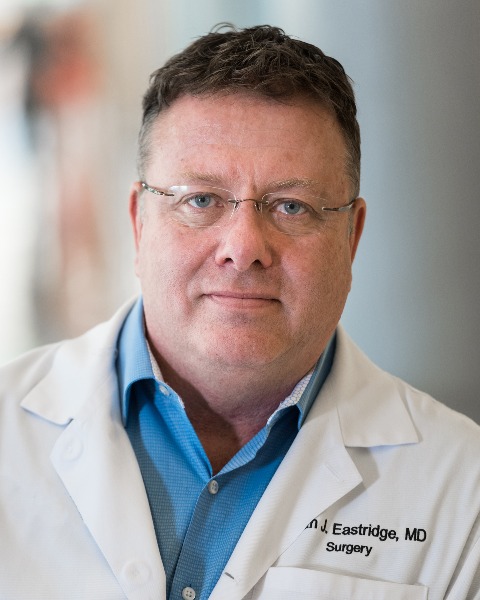 Brian Eastridge, MD is Professor of Surgery and Chief of the Division of Trauma at the UT Health San Antonio, Trauma Medical Director of the University Health System and holds the Jocelyn and Joe Straus Endowed Chair in Trauma Research. He received his BS in biochemistry from Virginia Tech in 1985 and his MD from the University of Maryland School of Medicine in 1989. Dr Eastridge did his residency in general surgery at the University of Maryland Medical System and then pursued fellowship training in surgical critical care at the University of Texas Southwestern Medical Center in Dallas,after which he spent 8 years on the faculty of UT Southwestern. After 17 years of Reserve service, Dr Eastridge transitioned to active duty as COL U.S Army, Medical Corp in 2005-2012 and served as Trauma Medical Director for the Brooke Army Medical Center, Director Joint Theater Trauma System (Deployed), Director of the Joint Trauma System, and Trauma Consultant to the US Army Surgeon General. During his service, he has deployed six times to combat operations in Southwest Asia during which time he helped lead the development and implementation of the military trauma system, the Joint Trauma System, designed to improve trauma care and patient outcomes after battlefield injury. He is an appointed member of the Texas Governor’s EMS and Trauma Advisory Council. Dr. Eastridge is Vice Chairman of the Southwest Texas Regional Advisory Council . He was appointed to the American College of Surgeons Committee on Trauma National Faculty and serves as the Trauma Systems Chairman. Dr. Eastridge has published extensively in the peer reviewed literature and has written / edited three books focused upon improving the military trauma system and improving combat casualty care. Dr Eastridge’s current research is focused upon trauma system development, and predictive modelling of pre-hospital mortality.