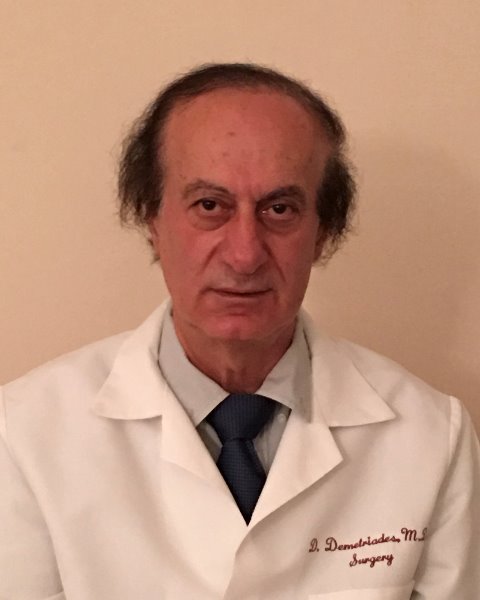 Dr DEMETRIOS DEMETRIADES, M.D., PH.D., FACS is a Professor of Surgery, University of Southern California, LA. He has published
698 peer review PubMed publications in referenced journals, 165 book chapters, 6 monographs, 18 surgical textbooks, one atlas of Surgical Techiniques in Trauma (received first prize of the British Medical Association and translated in 5 foreign languages), one atlas of Emergency Trauma and one atlas of Surgical Critical Care Procedures.
Dr Demetriades established and directed the Fresh Tissue Dissection Lab, which uses cardiovascular perfusion and mechanical ventilation to create the optimal surgical training model. He was instrumental in establishing the US Navy Trauma Training Program at USC, which has trained more than 4,000 US Navy personnel in trauma. He delivered more than 800 invited lectures nationally and internationally.
Dr Demetriades received numerous national and international recognitions, including the US Navy, honorary doctorates from the University of Athens and the University of Thessaloniki and membership in the Greek Academy of Sciences and Medicine. He delivered the Scudder Oration in Trauma and the Excelsior Surgical Society/Edward D. Churchil lecture, of the American College of Surgeons Clinical Congress. He received the American Heart Association Lifetime Achievement Award in Trauma Resuscitation Science, and is a founding member of the Academy of Master Surgeon Educators of the American College of Surgeons.