In memory of our AAST members who have passed

Click here on the name below to read their obituary 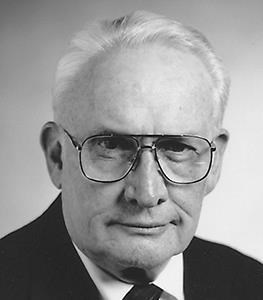 Fondly know as Jack or Mosh, he was born on January 2, 1925, in Boston, Massachusetts, the 2nd son of Harry P. and Anne Ryan Cahill of Brookline. Jack was predeceased by his brother Philip H.R. Cahill in 2017. Jack attended Boston College High School (1941), and the College of the Holy Cross (1945). He attended Tufts Medical School (1948) under the Navy’s V12 Medical Corp program and began his training at Boston City Hospital with the 3rd Surgical Service.

During his training, the Korean War began and he was stationed in a military hospital in Osaka, Japan. While chief surgical resident at Bridgeport Hospital in Connecticut he met a beautiful young nurse, Corinne Savoie Haines. He and Corinne married on September 6, 1958 and settled in Cohasset where they raised their five children.

Jack established his academic general surgery career at Boston City Hospital and Boston University School of Medicine. After retiring from the practice of surgery, Jack chose to work for many more years in hospital utilization at Boston Medical Center and finally retired at age 86.

He was a member of the American College of Surgeons, New England Surgical Society, and Boston Surgical Society. He was also a member of the Holy Cross Club of Boston and the Clover Club of Boston. Jack was an active congregant at Saint Anthony’s Parish in Cohasset, serving as a lector, alter server, and CCD teacher. Yearly family ski trips to Waterville Valley were the source of many happy memories.

Jack is survived by Corinne, his loving wife of 60 years and their five children Susan Cahill and her husband Frank Bailey of Wayland; John Christopher Cahill and his wife Robin of Marshfield; Harry Stuart Cahill of Cohasset; Leslie Cahill and her husband Mark Prashker of Savannah, Ga.; Steven Cahill and his wife Stephanie of Newton; and, his five wonderful grandchildren: Matthew and Michael Bailey; and Remy, Ella and Alexandra Cahill. He is also survived by many loving nieces, nephews, great-nieces and great-nephews in Connecticut, Vermont, Florida, and California. 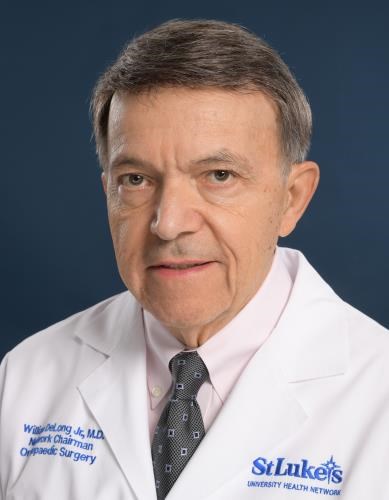 Dr. DeLong trained countless surgeons and was a genuine leader whose most recent position as Chairman at St. Luke’s oversaw the rapid growth and development of a community program into a large network of academic specialists. Always leading by example, he continued to take overnight trauma call responsibilities and maintained full surgical and clinic schedules up until his passing. He never turned a patient away, never said no to a colleague in need, and generously mentored countless new surgeons. His contributions continue to benefit patients and doctors around the world.

Bill was also well-known for his “boots on the ground” humanitarian efforts during Hurricane Katrina and the Haiti earthquake and his leadership as Chairman of the Humanitarian Committee of the OTA. He was a member of the Trauma Critical Care Team of the Department of Homeland Security for many years. In addition to these professional service activities, he was active as a consultant to the Haddonfield Child Care Advisory Board, a member of the Haddonfield Little League Board of Directors, Cub Scout master, the Haddonfield Substance Abuse Task Force, and coach of the Haddonfield Junior Basketball Team. 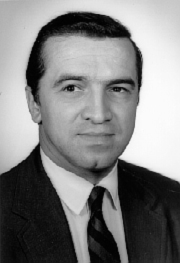 In 1975, he founded the first helicopter acute care ambulance service in the United States, LifeFlight. Prior to LifeFlight, aircraft were used exclusively as transport only. In 1988, he was appointed as chairman of the Depart­ment of Surgery of Pennsylvania Hospital, the nation’s first hospital.

A fellow of the American College of Surgeons since 1970, he received its Jacobson Innovation Award in 2005.

In 2012, the Stanley J. Dudrick Hospital was dedicated in his honor in Skaw­ina, Poland. In 2013, Franklin and Marshall College awarded him the honor­ary degree of Doctor of Science and the University of Texas Health Science Center at Houston awarded him its highest medal and established the annual Stanley J. Dudrick, M.D., lectureship at its 40th anniversary.

He also received the Distinguished Service Award of The Society of Surgical Oncology. In 2014, the American College of Surgeons honored him with a video presentation as one of the “Heroes of American Surgery.” In 2016, he was cited by Medscape as one of the “Fifty Most Influential Physicians in History.”

Stanley is survived by his wife of 61 years, Theresa, who resides at their Crystal Lake property in Eaton; six children, 16 grandchildren, and five great-grandchildren. 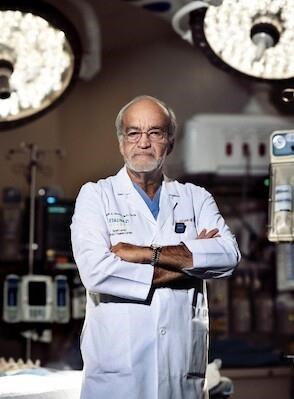 Dr. Gerardo Alfredo Gomez Losada graduated from medical school at Universidad de Cara­bobo in Venezuela. He completed his surgical residency at the University of Massachusetts, Worcester.

After he completed his residency, he started his career as a staff Trauma surgeon in 1982 at Jackson Memorial in Miami, Fl. In 1990, he accepted the Chief of Trauma Surgery position at Wishard Hospital as a faculty member at In­diana University. This began his 26-year career serving the community of Indianapolis. He was integral in the design of the first level one Trauma Center in the state of Indiana at Wis­hard Hospital. Throughout his career, he has impacted thousands of students, doctors, nurses, and paramedics; he took great pride in these relationships.

He has saved countless lives and strived to make a difference with the violence in the community that he loved. He loved teaching Advanced Trauma Life Support and Advanced Trauma Operative Management courses all over the world and he was a proud member and former president of the Pan-Ameri­can Trauma Society. He is known as a father figure for trauma in Indiana and assured the successful transition from Wishard Hospital to Eskenazi Hospital in 2013.

Along with being an amazing surgeon, he also found the time to become a pilot. He learned how to fly during his residency in Massachusetts and contin­ued the hobby throughout his life. After he retired from Eskenazi Hospital he enjoyed working with his son Michael at Gomez BBQ at City Market located in downtown Indianapolis. He was the accountant, the payroll manager, and of course the comic relief. Aside from all of his accomplishments, he took the most pride in his 6 children, 5 grandchildren, and 2 great-grandchildren. He is survived by wife Adrienne, sons Alfredo (wife Amanda), Carlos, Tito, Michael, and Anthony, daughter Amanda, grandsons Nico, Corbin, and Liam, granddaughters Alexandra and Bailee, and great-granddaughters Sophia and Camilla. 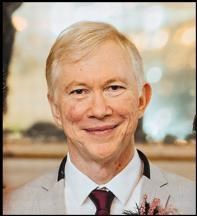 Born May 5th, 1956 in Missouri, Dr. Daniel Ledbetter was raised with his two sisters by Fern and Floyd Ledbetter in Orlando, Florida. He flourished in the Sunshine State and was inspired by his uncle and namesake, Dr. Daniel Wisely, to pursue a career in surgery. He earned his undergraduate and medical degrees from the University of Florida. While there, he played for the UF soccer team and became a life-long Gator fan.

In 1981 he moved to Seattle for his General Surgery residency at the University of Washington. While working as ‘trauma doc’ at Harborview he met his future wife, Dr. Sandra ‘Sunny’ Juul, a pediatric resident. They married on February 29th, 1984 and had two beautiful children. He completed his fellowship in Pediatric Surgery at the UW in 1991 and was triple Board-certified in Surgery, Pediatric Surgery and Surgical Critical Care. He worked at the University of Chicago and the University of Florida but ultimately returned to Seattle in 2000 where he worked at Seattle Children’s Hospital until his death. At the UW and SCH, he dedicated his time and energy to caring for patients and their families, mentoring surgical residents and fellows, and teaching medical students. His trainees and colleagues will remember a leader who embodied humility, grace, truth and excellence.

He lived a full and meaningful life and will be remembered as a wonderful husband and father who had a passion for World Cup soccer, golfing rain or shine, weekend walks at Marymoor park with his beloved golden retrievers, wine tasting, and non-fiction.

Dan is survived by his wife who will love and cherish his memory forever as well as by his two children, Kelly - who is continuing his legacy as a surgical resident at the UW and Brian - who inherited his dad’s broad intellectual curiosity and dedication to family. His sisters share his love of teaching and mentorship: Nancy as a STEM instructor in North Carolina and Susan as a family practice physician in Florida. 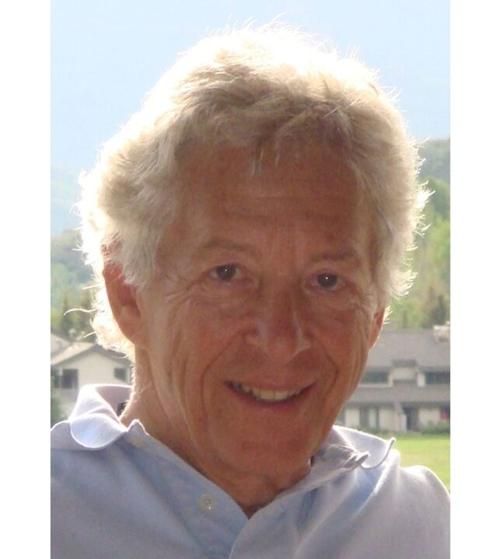 Born in Pittsburgh, Harvey was the David M. Hume professor of surgery at the VCU School of Medicine and chief of the Division of General/Trauma Surgery from 1978 to 2003, during which time he operated on thousands of patients. Never one to sit still, following retirement, Harvey became Editor-in-Chief of Surgery of Obesity and Related Diseases (SOARD), while simultaneously pursuing the invention of an abdominal device to cure preeclampsia.

He spent three years as a surgeon in the U.S. Army and served as president of the Western Trauma Association (WTA) and American Society for Metabolic and Bariatric Surgery (ASMBS). Harvey was a pioneer of gastric bypass surgery, providing evidence that it was the most effective option for weight loss and making it one of the most common operations performed by general surgeons today.

He earned his Bachelor of Science degree from Johns Hopkins University and Master of Science and Medical Degrees from Jefferson Medical College, and he completed his post-doctoral training at the University of Pennsylvania.

Harvey had a relentless drive in the pursuit of scientific truth and made a last­ing impact by challenging prevailing dogma. He inspired countless students, fellow surgeons and his children and loved to share the stories he gathered throughout his long and remarkable life.

He is survived by his wife, Betsy; sister, Marilyn Latterman; and children, Kathryn, Andy, David and Elizabeth.

Joseph John Tepas, III M.D. was raised in Baltimore, MD, where he attended Loyola Blakefield. A graduate of The College of the Holy Cross and Georgetown Medical School, the principles of faith and learning of these Jesuit institutions guided his professional and personal life.

Dr. Tepas was instrumental in the certification of Trauma One as a Level I trauma center and helped develop the first regional trauma system for the State of Florida. He guided the process for Wolfson Children’s Hospital’s des­ignation as a pediatric trauma center. A rescue helicopter based in St. Johns County bears his initials on its tail rotor. He is remembered for his care of the injured child, advancements in the management of traumatic brain injury, and his skill in neonatal surgery.

While medicine was his passion, Dr. Tepas’ first love was his wife and fam­ily. He enjoyed sailing, windsurfing, being at Crescent Beach with Jean and the children, sailing with friends in the islands, and vacationing on Martha’s Vineyard. His pride in his children and their accomplishments was boundless. He was a doting grandfather, who loved being surrounded by the noise and chaos of his Irish family. 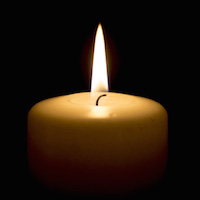 He was an associate professor of medicine at NYU, and a clinical professor at Downstate Medical School. Dr. Worth was appointed by Governor Cuomo to the NY State Hospital Planning and Review Committee (1988-95). He served as president of the NY Surgical Society, and held offices in other professional organizations.

In retirement, he volunteered and served, for more than 20 years, as a con­sultant and scholar in residence for the Institute of Medicine, and became a member of the Cosmos Club. Dr. Worth also volunteered for the Sun City Center Emergency Squad. He graduated Clark University (B.A., 1950), and NYU School of Medicine (1954). He completed his internship and residency at NYU, and served in the U.S. Army (1955-57).

Dr. Worth was predeceased by his daughter, Carol, and son, David. He is sur­vived by his wife, Alice; daughter, Nancy, and grandson, Benjamin.