10 - To Operate or Not to Operate? Quality of Life Outcomes in Craniofacial Fibrous Dysplasia 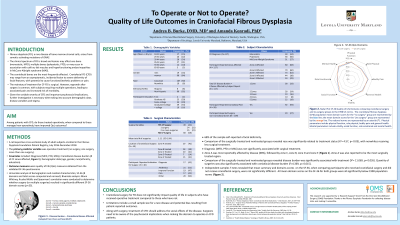 Abstract: Fibrous dysplasia (FD) is a rare disease of bone marrow stromal cells caused by mutation in the gene GNAS. Craniofacial fibrous dysplasia (CFD) is the largest subgroup of individuals with the disease, causing facial distortion of features, sinus/dental problems, or rarely, visual/hearing impairment.1 The goal of craniofacial surgery is to treat functional problems or manage aesthetics; however, postoperative FD regrowth is common. Reports of quality of life (QoL) in individuals with CFD are lacking, and the impact of operative treatment on QoL is not established. Previous work determined that life satisfaction did not correlate with quantitative disease burden in FD, and that children with extensive FD had levels of satisfaction comparable to those with less disease burden.2 We aimed to answer the question: Among patients with CFD, do those treated operatively, when compared to those managed non-operatively, have improved QoL outcomes? This is a retrospective review of subjects enrolled in the Fibrous Dysplasia Foundation Patient Registry, July 2016 to December 2018. Inclusion criteria were self-report of CFD and completion of surveys, which included demographics, diagnosis, surgical status, and QoL measures based on validated questionnaires. Deidentified data were analyzed using SPSS. Descriptive and bivariate statistical analyses were conducted. SF-36 QoL items were aggregated into physical (physical functioning, role limitations, bodily pain, general health) and mental (vitality, social functioning, role limits from emotional problems, emotional well-being) domains, and scores were normalized. Nonparametric tests (Mann-Whitney, Kruskal-Wallis, and Spearman’s correlation) were conducted to determine whether surgery (or multiple surgeries) resulted in significantly different SF-36 domain scores (P < .05). A total of 117 CFD adult subjects were included in the study, with a mean age of 40. The sample was predominately women (84%), white (92%), non-Hispanic (92%), and educated (50% participants received college degree). Most subjects were diagnosed with polyostotic disease (50%), followed by McCune-Albright syndrome (27%) and monostotic disease (24%). Craniofacial disease burden was calculated based on the number of facial zones affected (Figure 1). Forty-nine subjects (41%) received at least 1 craniofacial surgery, with 78% reporting surgery on facial bones. Over three-quarters of participants reported craniofacial bone pain. Surgical therapy alone, in terms of its occurrence or its number of occurrences, was not significantly related to long-term physical or mental health outcomes. Bivariate analyses between SF-36 domain measures, pain experience, anxiety, and depression yielded significant results. T-tests showed SF-36 summary values were all significantly lower than the 1998 US population norms (Figure 2). The overall goal of this research is to assist CFD patients with informed decision-making and to provide better standards of care regarding operative treatment. Taking into account a variety of demographic, disease-related, and mental health variables, our data show that craniofacial surgery for FD does not differentially impact quality of life in subjects who have received operative treatment when compared to those who have not. Although the bivariate relationship between number of surgeries and mental health was not significant, it suggests a positive association. Limitations include a small sample size for a rare disease, and bias from patient-reported outcomes. Future studies using this dataset will include key factors that impact long-term mental health, such as craniofacial disease burden, stigma, anxiety, and depression. In conclusion, mental health resources should be considered in combination with surgical intervention for CFD. Furthermore, collection of QoL data from FD patients before and after surgery should be undertaken to develop a better understanding of its long-term impact.