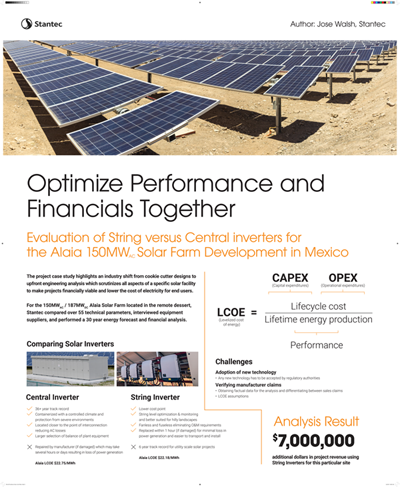 Importance:
The project case study highlights an industry shift from cookie cutter designs to upfront engineering analysis which scrutinizes all aspects of a specific solar facility to make projects financially viable and lower the cost of electricity for end users. The talk demonstrates to owners, developers, designers, and equipment suppliers how the Levelized of Cost of Energy (LCOE) considers the facilities technical performance and lifecycle costs and how it can be used for making decisions. The case study compares string and central inverters for the 150MW AC Alaia solar farm in the Mexican desert and mentions challenges faced when developing a utility scale solar farm in Mexico.

Summary:
Prana Power is in the process of building a 150MWAC Solar Plant called “Alaia” and will be located 40km West of Ciudad Juarez, Mexico. The site is a dry desert with a temperature range from -9°C to +38°C and a red silty sand top soil. The solar installation will have 549,840 solar modules on single-axis trackers and will be divided into 60 blocks each of 2.5MWAC in size. In addition, Prana Power will be building a 46km long, 230kV transmission line to connection to the Paso Norte Sub-station.
Traditionally the solar PV industry has been installing central inverters, however, more recently and notably in China, the use of string inverters has been employed in some utility scale solar plants.
Prana Power together with Stantec Consulting performed a thorough technical and financial evaluation of central and string inverters by interviewing suppliers, visiting a manufacturing facility, comparing over 55 technical parameters and modelling their performance. The presentation will provide an overview of the technical and financial evaluation performed, differences in application, and operation and maintenance considerations.
Alaia is among the first utility scale solar plants in Mexico to propose the use of string inverters and had to demonstrate to the CFE that this relatively new technology fulfills the CFE grid requirements.
Both inverter types were found to be suitable for most locations and equal in most categories but they each have application advantages. String inverters are particularly suitable for remote locations where access to technical support is harder to obtain and where it is harder to transport larger pieces of equipment. Central inverters are more widely accepted with a 36+ year track record and are particularly suitable for extreme climates where having a temperature regulated container is favorable for the equipment and O&M personnel.