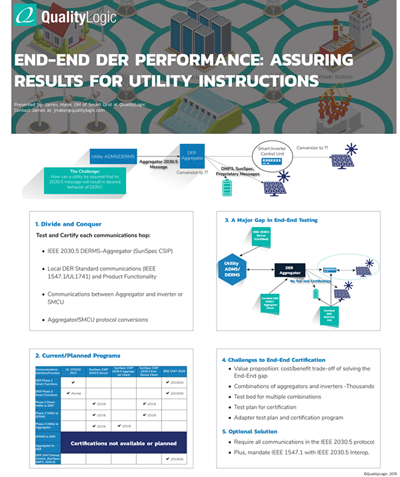 Led by California and the IEEE 1547 Work Group, the electric utility industry is rapidly developing a standardized method to communicate with and manage the growing penetration of DER assets at the distribution level. The California PUC, in conjunction with the IOUs and vendor community, has established a set of procedures for ensuring that the smart inverters meet both performance and communications requirements between utilities and the smart inverters.
This paper looks at the current plans and how well they will ensure the desired performance of smart inverters under the direction of a utility DER management system.
The challenge for system operators, aggregators and vendors is how to be sure from the get go that the smart inverters that are being relied on for specified performance behavior (based on utility instructions) are implemented. The last thing needed is for the instructions to 100,000 inverters to get garbled in the communications process and result in behaviors exactly the opposite of those needed. Instead of being an asset to grid stability, they suddenly become a major liability requiring emergency actions.
SEPA published a landmark report in November or 2017, the "DERMS Requirements” document, dated November 13, 2017, from the "Group Management Working Group". This document assumes the use of standard communications protocols from a DERMS to a smart inverter as described in Chapter 1.4, "Control Requirements". However, there is no requirement specified to insure the actual performance of the systems being managed. Thus the assumption that the communications pathways will work as required.
To explore the feasibility of the "DERMS Requirements" assumptions, this paper starts with a look at the CA Rule 21 interoperability certification plans, analyzes the potential risks and gaps in these plans and suggests how utilities can address the end-end issues until the industry test and certification programs provide the required assurance.