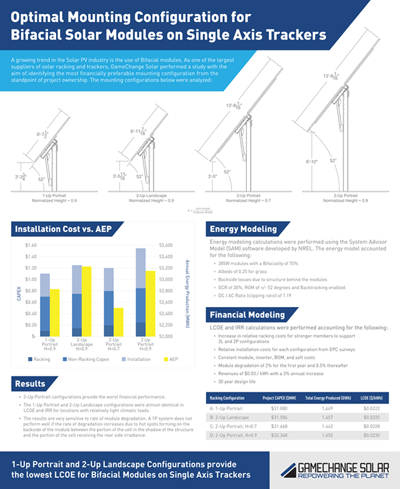 With the increasing popularity of bifacial solar modules, solar racking manufacturers have introduced single axis trackers with various mounting configurations into the market. This study aims to identify the most financially preferable mounting configuration from the standpoint of project ownership, accounting for relative racking structure costs, relative installation costs, and energy production.

Energy Production modeling was performed using the System Advisor Model (SAM) software developed by NREL which determines rear side irradiance gain accounting for normalized height of the rack, how structure shades the rear side of the module and portrait vs. landscape module orientation. Structural analysis was performed on each mounting configuration by a licensed Professional Engineer. The relative cost of the rack for each configuration was identified. Relative costs for installation were also determined. Finally, financial models for the applicable configurations were created accounting for total project CAPEX, O&M, and revenues from energy production including module degradation.

However, it is understood that structure obstructing a portion of the backside of bifacial modules creates hot spots due to the mismatch of irradiation on the rear side of the cells between the portion of the cell in the shadow of the structure and the portion of the cell receiving the rear side irradiance. This mismatch is likely to result in accelerated degradation of the solar modules, which will have an adverse impact on project financials for configurations where structure exists behind the bifacial modules, such as the 1-Up Portrait configuration. As of the writing of this paper, multiple organizations are studying this phenomenon to identify the rate of accelerated degradation due to backside irradiance mismatch. Until it is confirmed that the 1-Up portrait mounting configuration does not have a significant impact on bifacial module degradation rate, the recommended mounting configuration for bifacial solar modules on a single axis tracker for projects with relatively light climatic loads is 2-Up Landscape.