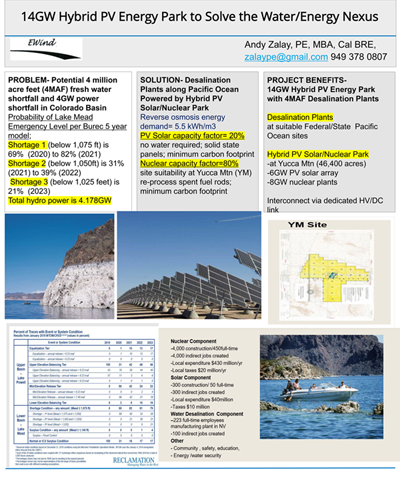 Background:
“Water/Energy Nexus: Business Case for Renewable Energy and Energy Storage for Water Agencies”
I built the Capital wind farm which powers the City of Sydney desalination plant and is helping Sydney face the current drought.

A similar solution to the water/energy nexus is available to the 40 million residents in the West facing the drought as described below.

• The importance of this topic;
The water/energy nexus is a critical issue for federal water and energy agencies in the West (DOI, Burec, BLM, DOE) and state (MWD, LADWP, Salt River Authority) and local agencies egiven the 4 million- acre feet (MAF) shortfall (drought) projected for the Colorado River Basin.
To meet the 4MAF shortage, water agencies are planning 9 desalination plants in California.
The power required to desalinate 4MAF of ocean water is on the order of 3 to 5GW.
The price of electricity is major operating cost for water treatment plants and the utility rates are projected to increase significantly in the event of a drought due to loss of hydro power.
Reliability of electric service is critical to meeting customer satisfaction goals, particularly in the event of a 4 MAF drought by 2030 in the West.


• Clear and immediate application to the learner’s work;
Planning would need to start today by local, state and federal agencies and NGO stakeholders and public on 4MAF desalination project powered by 3 GW to 5GW Renewable Energy and Energy Storage system given there is only 11 years before the 2030 projected drought and given that typical infrastructure projects take a decade of longer to implement as was the case for the City of Sydney desalination plant.