Purpose: Amorphous solid dispersions (ASDs) are important bioavailability enhancing formulations that can provide rapid dissolution rate and increased solubility over the their crystalline forms. Understanding ASD in vivo performance is critical for developing a robust drug product, and can be challenging considering the dynamic behavior of ASDs in gastrointestinal fluids related to supersaturation, solubilization, and precipitation.

For ASDs comprising APIs that tend to recrystallize in solution, standard in vitro testing strategies often over predict precipitation in the intestinal tract. The purpose of this study was use a carefully designed biorelevant in vitro test coupled with in silico modeling to forecast and understand the in vivo performance of ASD tablets comprising the rapidly crystallizing API, posaconazole. In addition, the in vivo study was used to demonstrate equivalent performance of a novel High Loaded Dosage Form (HLDF) tablet to a traditional ASD tablet, but with improved drug loading in the dosage form.


Methods: Study Formulations - Posaconazole was selected for this study due to its low solubility (BCS Class II)—requiring bioavailability enhancement from an ASD, low Tg, and propensity to crystallize in gastrointestinal media, making it a suitable candidate for the HLDF platform. Table 1 describes the formulations evaluated in this study and all subsequent text will refer to each formulation according to the specified nomenclature.

In Vivo Study - Formulations were administered to six fasting male beagle dogs at 10 mg/kg. Dogs were pre-treated with pentagastrin (6 μg/kg) 30 minutes prior to dosing in all formulation treatments. Animals were dosed once with each formulation with at least a 1-week washout period between each dosing.

Absorption Modeling - Absorption modeling was performed using GastroPlus v9.6 to make predictions for in vivo performance prior to the study and to subsequently understand results post-study. In vitro solubility data, in vivo clearance terms established from IV data reported by Nomier et al.1, and physicochemical properties calculated from ADMET Predictor v9.0 were used as inputs to the model. Permeability was set to 7.1 x 10-4 cm/s as previously reported by Hens et al.2 for human. This value was deemed sufficient for posaconazole in dog given recent literature studies correlating dog and human permeability. Dissolution rate was assumed to be rapid given the small particle size obtained from each disintegrating tablet and the high dose number for posaconazole in this in vivo study. HLDF and benchmark tablets were treated the same in the absorption model—assumed to maintain the amorphous solubility throughout the GI tract. The negative control tablet and crystalline suspension were assumed to crystallize in the model, impacting simulated exposure.


Results: In Vitro - Performance from each formulation ranked HLDF(s) >Benchmark >negative control >crystalline suspension. The observed differences between HLDF and benchmark formulations in the duodenum/jejunum concentration was driven entirely by nano-sized species. These species may not be significant in vivo. The duodenum compartment showed the least amount of differentiation among all formulations and may be the best indicator for performance due to mass transit in and out of the compartment, similar to the GI tract.

In Vivo - Rank ordered performance was the same as observed in vitro. The HLDF formulations statistically outperform the crystalline suspension and qualitatively outperform the benchmark tablet. Lower intersubject variability was observed from the HLDF formulations vs. negative control. The in silico modeling suggests that the reason for the over differentiation in vitro was because of a higher extent of crystallization from the Eudragit negative control and crystalline suspension in vitro compared to in vivo, despite being under more biorelevant conditions with the CTD apparatus.


Conclusion: In vitro testing coupled with in silico modeling were used a priori to design a successful posaconazole in vivo study in dogs. Both HLDF tablets had equivalent performance to the benchmark tablet in vivo and reduced tablet size by 40%. Despite more biorelevant in vitro testing conditions, crystallization was still overpredicted for the crystalline suspension and negative control compared to in vivo performance, with the best performance indicator in vitro coming from the CTD duodenum compartment (the only compartment with drug transit in and out, similar to the GI tract). These findings highlight the utility of combining in vitro testing and in silico modeling to forecast and understand in vivo dosage form performance. 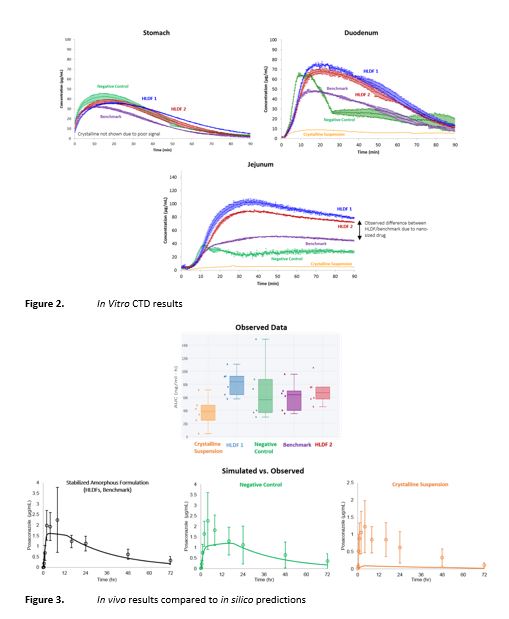