Purpose: Hydrophilic peptides constitute most of the active peptides. They mostly permeate via tight junctions (paracellular pathway) in the intestine. This permeability mechanism restricts the magnitude of their oral absorption and bioavailability. We hypothesized that concealing the hydrophilic residues of the peptide using the lipophilic prodrug charge masking approach (LPCM) can improve the bioavailability of hydrophilic peptides. To test this hypothesis, a cyclic N-Methylated hexapeptide containing the Arg-Gly-Asp (RGD) and their prodrug derivatives, masking the Arg and Asp charged side chains, were synthesized.


Methods: All peptides in the library were produced by solid phase synthesis with standard Fmoc protecting strategy. The library was evaluated for intestinal permeability in vitro using the Caco-2 model. The Caco-2 cells were also incubated with Palmitoyl Carnitine Chloride (tight-junctions moifier) and verapamil (p-glycoprotein inhibitor) to study the permeation mechanism.
Further investigation of metabolic stability ex vivo models in rat plasma, brush border membrane vesicles (BBMVs) and isolated CYP3A4 microsomes in a selected peptide and its prodrug (peptide 12)were performed. The pharmacokinetic studies were conducted in the freely moving rat model.


Results: The parent drug analogues were found to have low permeability rate in vitro, corresponding to atenolol, a marker for paracellular permeability. Moreover, palmitoyl carnitine increased the Papp of peptide 12 by 4-folds indicating on paracellular permeability. The Papp of the prodrug derivatives was much higher than their parent peptides. For instance, the Papp of the prodrug 12P was 20 folds higher as the Papp of peptide 12 in the apical to basolateral (AB) direction. Whereas the permeability in the opposite direction (BA of the Caco-2 model) was significantly faster than the Papp AB, indicating the involvement of an efflux system. These results were corroborated when verapamil, a P-gp inhibitor was added to the Caco-2 model increased the Papp AB of prodrug 12P by 3-fold. Pharmacokinetic studies in rats showed an increase in the bioavailability of peptide 12 >70 folds (from 0.58±0.11% to 43.8±14.9%) after applying the LPCM method to peptide 12 and converting it to the prodrug 12P. 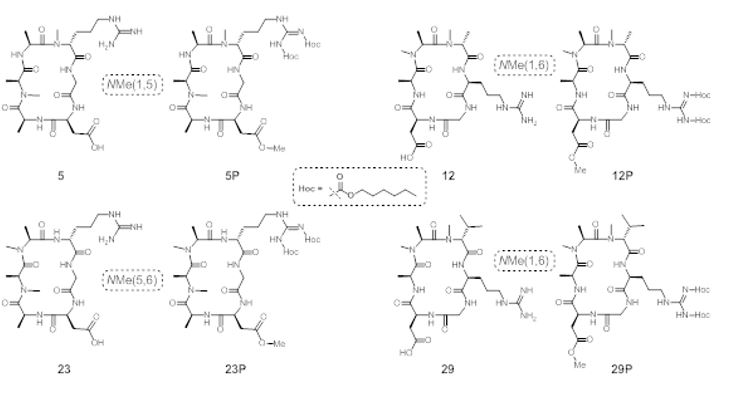 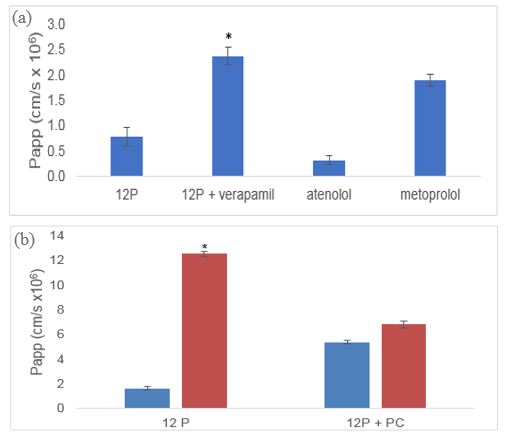 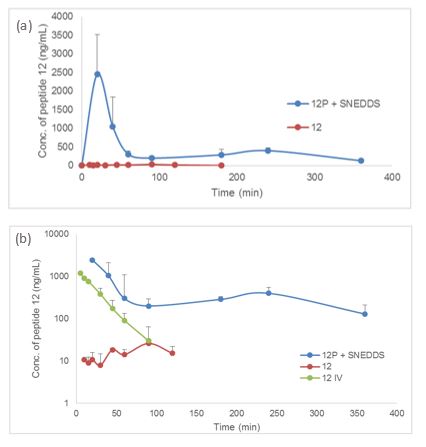