Purpose: Excipients play an important role in the formulation of dosage forms and can be used to improve the bioavailability of a drug through physical interactions that alter the rate of dissolution of a drug. The objective of this study was to predict the effect of excipients on the dissolution rate of a poorly soluble drug using computer simulations and compare the predictions with in vitro measurements.


Methods: Solid dispersion of ritonavir was prepared through hot melt extrusion, which was then compressed to form tablets. A model for the ritonavir IR formulation was developed in DDDPlusTM software platform using previously published solubility data and other physicochemical properties of ritonavir. The developed model in DDDPlus was used to evaluate the effect of solubilizer and disintegrant in the direct compressed ritonavir tablet. Dissolution test results of direct compressed tablets with and without disintegrant in various media with physiologically relevant pH values were compared with simulations using the DDDPlusTM. Observed and predicted dissolution profiles were compared using similarity tests and the effects of various potential drug release mechanisms were assessed.


Results: The Solubilizer Effect Coefficient (SEC) parameter in DDDPlusTM was optimized in the software platform to provide good estimations of the effect of copovidone in the extrudate on the dissolution profiles of all tablets. The SEC is dependent on the drug/polymer ratio and the drug’s solubility in the medium. The optimized value of the SEC was used for dissolution predictions for tablets with and without disintegrant. Disintegrant concentration in the in silico model was found to have no effect on simulations. Disintegration time was found to be the predictive factor for dissolution rate of the tablets. Drug release was shown to be formulation controlled in the tablets without disintegrant and in the tablets with disintegrant, was via drug diffusion and polymer surface erosion.


Conclusion: DDDPlusTM has the potential to estimate the effect of known excipients in a formulation on in vitro dissolution at an early stage in the drug development process. This could be useful in reducing the number of test scenarios when optimizing formulation composition in order to improve bioavailability of poorly soluble drugs. 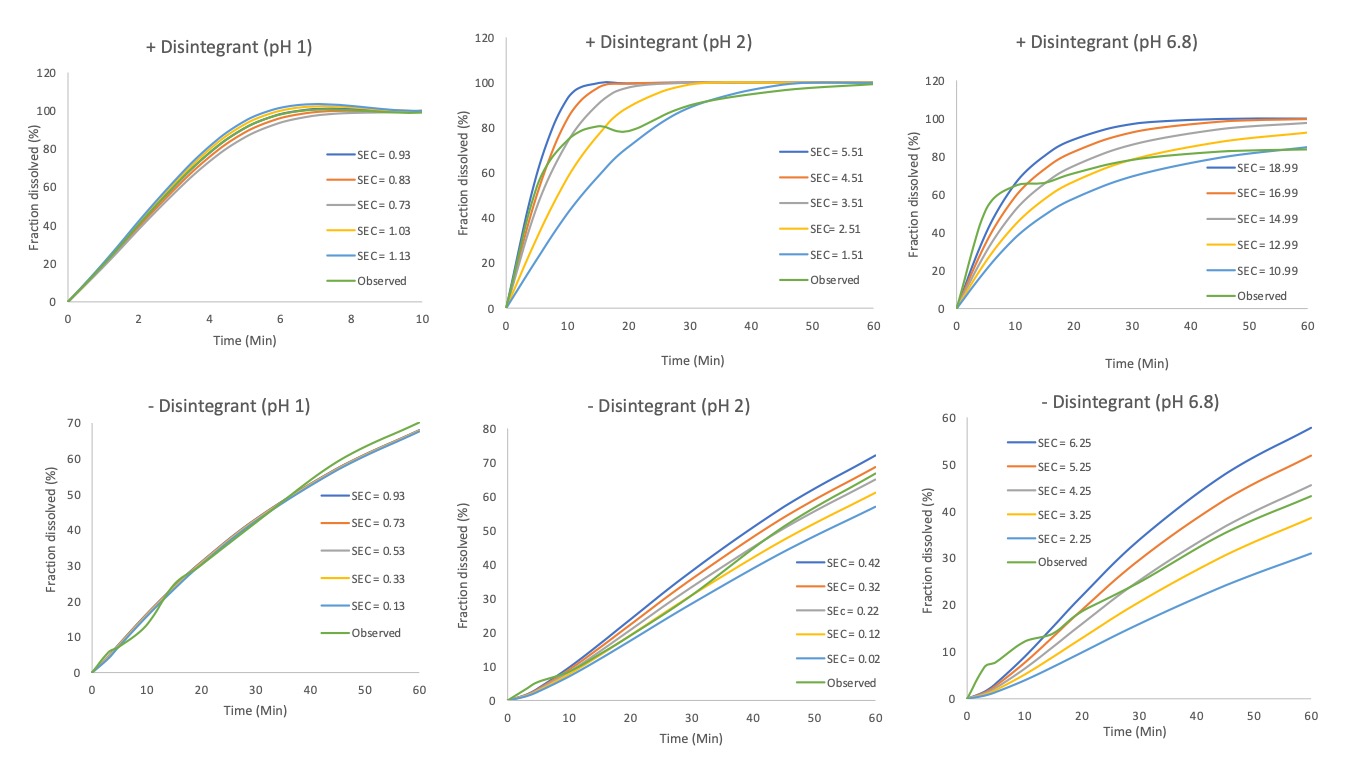