Purpose: Amorphous solid dispersions (ASDs) have emerged as a strategy to increase bioavailability of poorly soluble drugs. ASD bioavailability enhancement relies on two characteristics. First, an ASD uses the amorphous form of the drug which usually has a higher dissolution rate than its crystalline counterpart. Second, upon dissolution, ASDs form a supersaturated system and, for some systems, a colloidal drug-rich phase (nanodroplets) is formed. It has been previously demonstrated that the drug-rich phase consists of nanosized drug-rich droplets that can act as a reservoir maintaining the maximum membrane diffusive flux which is reached at the maximum supersaturation (amorphous solubility).

A relationship between nanodroplet formation and bioavailability enhancement following oral dosing has been suggested. The small size of the nanodroplets and their amorphous nature underpins the reservoir effect, since these two characteristics lead to rapid dissolution, immediately replenishing drug lost by absorption. Consequently, if agglomeration of nanodroplets occurs, leading to bigger particles, deleterious effects on dissolution characteristics are anticipated; therefore, it is crucial to stabilize such nanodroplets against size enlargement in order to preserve their useful characteristics.

Although polymers are used to delay ASDs crystallization tendency, other excipients may be needed during production and dissolution of the ASDs. For example, surfactants are common excipients used in ASDs not only for rheological purposes during production but also to promote release of API from the polymer during dissolution. Nevertheless, some surfactants may induce crystallization, negating the increased bioavailability of the ASDs.

Another less studied area is the potential of surfactants to stabilize the nanosized droplets formed upon dissolution of ASDs. Additionally, surfactants are endogenous substances in the gastrointestinal tract, for example bile salts. Thus, they will be involved in the dissolution of oral formulations.

The purpose of this project was to evaluate the relationship between surfactant chemistry and drug physicochemical properties to identify the minimum surfactant concentration which stabilizes nanodroplets against size enlargement (i.e. no agglomeration occurs), and where crystallization is avoided. Rationalization of observations was made by considering theoretical surface area coverage as well as potential interactions between drug and surfactant.


Methods: Drug-rich nanodroplets were produced by the solvent shift method by adding small amount of pre-dissolved drug in organic solvent into phosphate buffer 50mM pH 6.8 containing the surfactant to be evaluated. Once the concentration of drug in the buffer is higher than the amorphous solubility, the excess drug forms drug-rich nanodroplets. The size of the drug-rich nanodroplets was monitored by nanoparticle tracking analysis (NTA) and dynamic light scattering (DLS) for four hours. All experiments were conducted at 37 °C.

Clopidogrel (Tg:-7 °C ), ledipasvir (Tg:160 °C ) and atazanavir (Tg: 104 °C) were used as the model drugs, while sodium dodecyl sulfate (SDS) (ionic), TPGS (nonionic), Tween 80 (nonionic), and CTAB (cationic) and the bile salt, sodium taurocholate (STC), as well as other compounds with surface active properties including the proteins, casein and mucin, were evaluated as colloidal stabilizers.


Results: TPGS and Tween 80 were found to be effective at stabilizing clopidogrel nanodroplets at surfactant concentrations as low as 2 µg/ml as evidenced by a relatively constant size, polydispersity index (PDI) and concentration of particles/ml within 4 h compared to buffer, where rapid agglomeration happened within 1h (figure 1). Concentrations higher than 20 µg/ml were necessary when SDS was used. The higher affinity of SDS for water relative to the non-ionic surfactants may explain the higher concentration of SDS needed for stabilization. Ledipasvir and atazanavir, which forms glassy colloids, was found more difficult to stabilize, with most of the surfactants proving largely ineffective at low concentrations. Results are summarized in Table 1.


Conclusion: Surfactants may be included in ASD formulations to help in stabilizing the colloidal phase formed upon dissolution; however, these results suggest that the effectiveness of surfactants as colloidal stabilizers depends both on the type and concentration of the surfactant, as well as the specific drug. Thus, in order to optimize an ASD to yield colloidal species stable to agglomeration, effective surfactants need to be identified. Additionally, from the model drugs evaluated it appears that drugs with a high Tg ( >40 °C) are more prone to agglomerate and are therefore more challenging to stabilize. Currently there is not systematic reasoning when choosing a surfactant to add to ASDs formulations; Therefore, it is relevant to study drug-surfactant interactions with the ultimate goal of designing more robust ASD formulations. 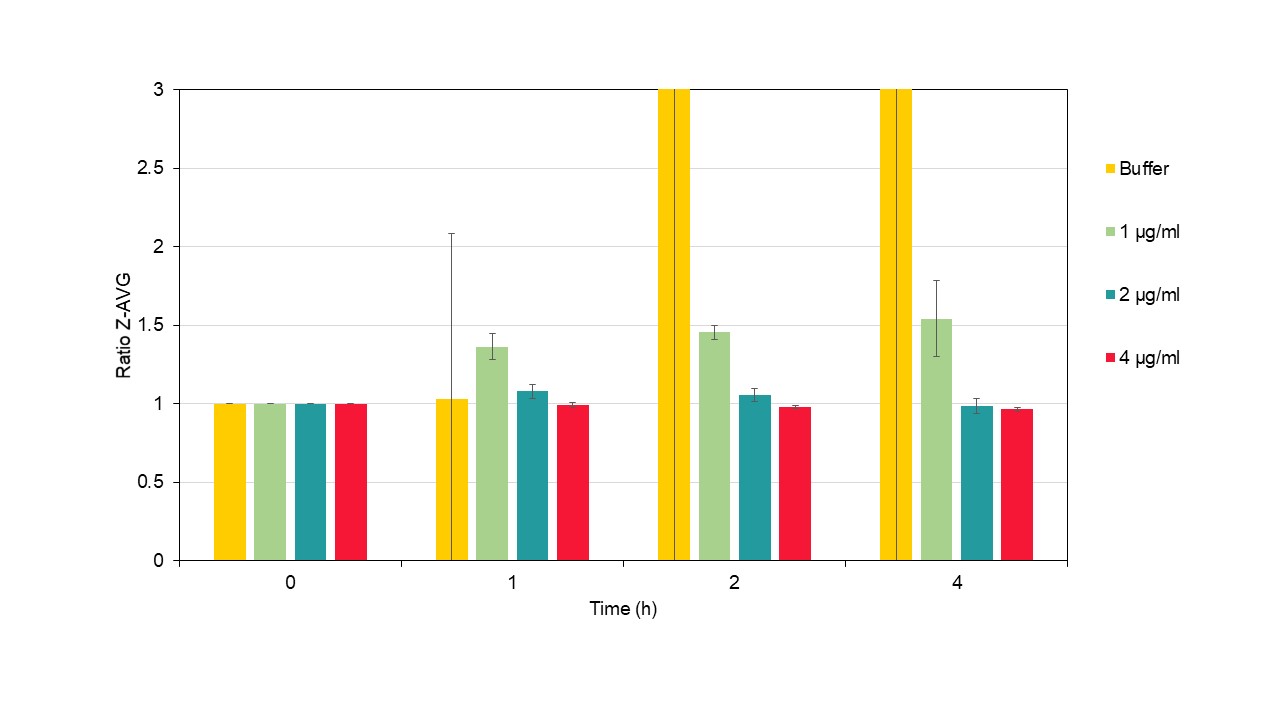 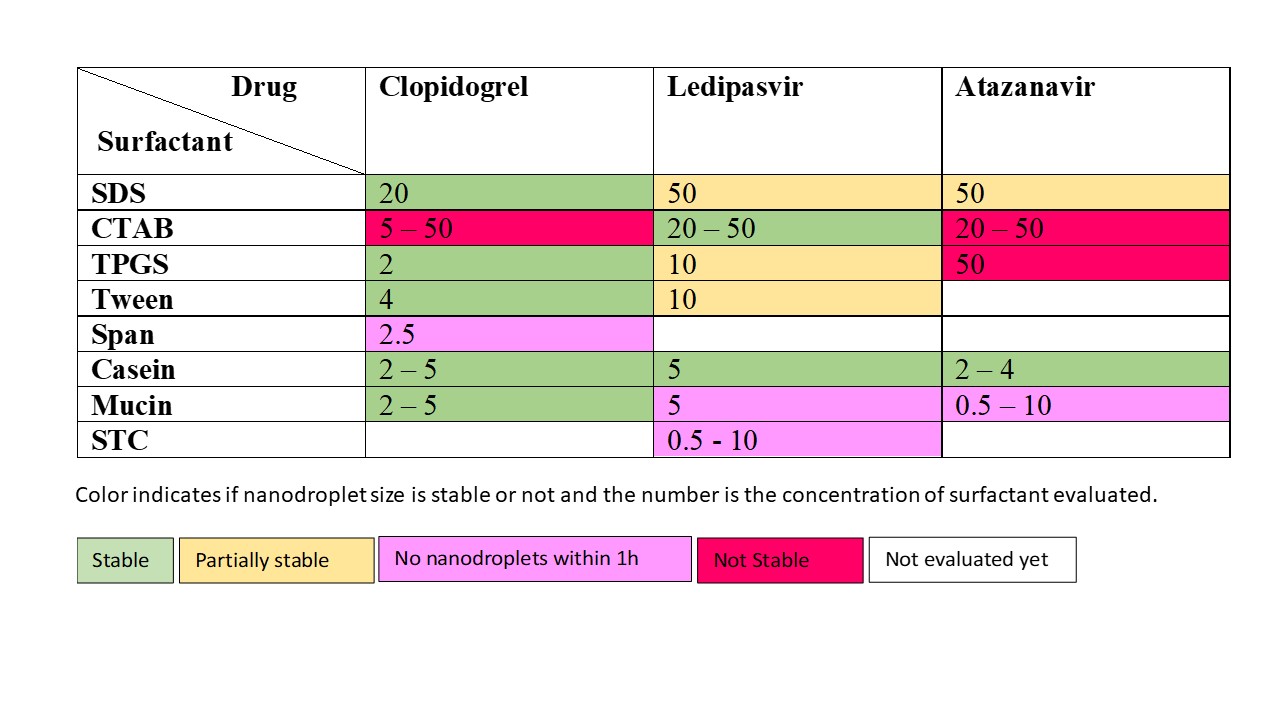