Purpose: Celecoxib (CEL), BCS class II drug, is a poorly water-soluble drug with a log P value of 3.5. Poor water-solubility results in poor oral bioavailability and therapeutic failure of drug candidates. To achieve rapid absorption of orally administered CEL, increases in solubility and dissolution rate are the most important factors under consideration. The eutectic mixture technique, which can form the API in a crystalline form in the solid dispersion, has attracted the attention to enhance solubility and dissolution rate and overcome drawbacks of amorphous state such as recrystallization, accelerated chemical degradation, and structural collapse. Therefore, the aim of the present study was to screen for possible eutectic mixtures, perform comprehensive solid-state characterization of the resulting eutectic mixtures and evaluate contact angle and dissolution rates.


Methods: The screening for eutectic points was performed by using the solvent evaporation crystallization method for the selected candidates (Adipic acid, ADI and Saccharin, SAC). Different molar ratios of CEL and the candidates were mixed and dissolved in ethanol and evaporated in a rotary evaporator. Eutectic mixtures with eutectic points were prepared by using the solvent evaporation crystallization method described above. For the CEL-ADI system, 1054 mg CEL and 946 mg ADI (52.7:47.3 wt %) was dissolved in 30 mL ethanol. For the CEL-SAC system, 1751.8 mg CEL and 248.2 mg SAC (87.6:12.4 wt%) were dissolved in 50 mL ethanol. The prepared mixtures were characterized by differential scanning calorimetry (DSC), powder X-ray diffractometry (PXRD), Contact angle, disc intrinsic dissolution rate (DIDR) and powder dissolution rate (PDR) were also investigated.


Results: Tammann’s triangle is drawn for the CEL-ADI and CEL-SAC compositions. For CEL-ADI, it can be seen that the highest ΔH value, indicating the eutectic composition, was observed for a molar composition of 0.30:0.70 (CEL: ADI) which is equivalent to 52.7:47.3 wt %. The heat of the melting was 162.20 J g−1. For CEL-SAC, maximum heat of melting was calculated 105.61 J g−1, which indicates a molar composition of 0.77:0.23 (CEL: SAC). Therefore, based on the Tammann’s triangle, the molar ratios of CEL-ADI and CEL-SAC were observed to be 0.30:0.70 and 0.77:0.23. The measurement of contact angles as preliminary experiments to show the degree of wetting when a liquid interface meets a solid surface has been widely used to measure the wettability of a solid surface. The results in Table 1 showed that CEL has poor wettability, due to the 0 s (initial), 10 s, and 30 s contact angles of 92.05 ± 0.75°, 89.6 ± 0.70°, and 86.4 ± 0.70°, compared with those of eutectics. Eutectics showed noticeable changes in water droplet volume and changes in contact angle, which provided good evidence of the enhanced wettability of the binary eutectic compositions of CEL-ADI and CEL-SAC. The dissolution behavior of CEL-ADI and CEL-SAC eutectics was studied by using DIDR and powder dissolution. Figure 1 showed that the dissolved amounts of CEL reached 2.78 and 2.51 mg/cm2 for the eutectic compositions of CEL-ADI and CEL-SAC, which was higher than 2.32 mg/cm2 of CEL. The dissolution rate from the DIDR investigation was determined as follows: CEL-ADI > CEL-SAC > CEL, where the values can be presented as 0.1088, 0.0975, and 0.0880, and revealed the eutectics’ higher dissolution rate by steeper slopes. The eutectics were further evaluated by comparative powder dissolution study in 0.5% SLS. Figure 2 showed the result of powder dissolution test. The dissolved drug was measured 139.65, 113.73, and 51.74mg for CEL-ADI, CEL-SAC, and CEL, over 120min. It was found that both eutectics showed a significantly higher dissolution profile than raw CEL.


Conclusion: ADI and SAC formed eutectic mixtures with CEL and the eutectic points were observed at the ratios of 52.7:47.3 (CELADI) and 87.6:12.4 (CEL-SAC) weight %. Moreover, CEL-ADI and CEL-SAC eutectic compositions exhibited higher wettability and dissolution rates than CEL. Additional studies of the powder dissolution revealed that eutectics, particularly CEL-ADI, significantly enhanced the dissolution profile of CEL in 0.5% SLS medium. Consequently, it was assumed that an increase in wettability and dissolution rate resulted from the inclusion of hydrophilic molecules by the formation of eutectics. 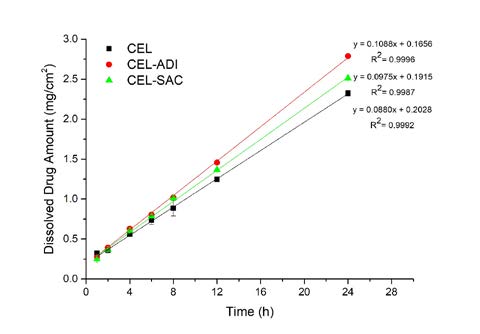 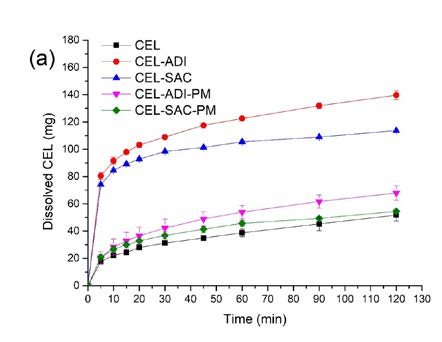