Purpose: The presence of particulates in biological drug products (DPs) has been a growing concern due to the potential impact to product quality, immunogenicity, safety and efficacy. Subvisible particles are characterized during product development. Lately there has been significant interest and scrutiny on characterization of submicron range particles during the drug development process. Subvisible particle characterization methods include light obscuration and Microflow Imaging (MFI). Upcoming submicron particle characterization methods include nanoparticle tracking analysis (NTA), microfluidic resistive pulse sensing (MRPS), and resonant mass measurement (RMM). It is critical to understand how these methods, specifically in the submicron range, perform especially where overlap between size ranges occur. Another key aspect is to compare subvisible and submicron data during characterization. The present work outlines the capabilities of various particle analysis techniques to characterize particulates over a broad size range. Two monoclonal antibodies (mAB 1 and mAB 2) were analyzed for submicron particles by using Nanosight (NTA), Spectradyne (MRPS), Archimedes (RMM), as well as for subvisible particles by using Micro-Flow Imaging (MFI). Since the sizing capabilities of these methods overlap, it is important to understand how their respective datasets align with one another.


Methods: mAB 1 and mAB 2 were tested unstressed (T0) and after being subjected to stress conditions: thermal stress for two weeks at 40 ⁰C, uncontrolled freeze/thaw five times from -70⁰C to 25⁰C, and agitation at room temperature for 24 hours at 300 rpm. All samples were analyzed neat (mAB 1: 50 mg/mL and mAB 2: 100 mg/mL), excluding NTA samples, which were diluted to 1 mg/mL. A singular measurement was collected from MFI, duplicate from RMM, and triplicate readings from NTA. To demonstrate the reproducibility of the Spectradyne, unstressed samples were tested in triplicate using three different consumable cartridge lots for each mAB (n=9). The results were averaged for each cartridge. For stressed samples, Spectradyne data was captured in triplicate using one cartridge, and results were averaged. All data was analyzed using Lumetics Link software.


Results: Through these results, we attempted to provide a complete picture of the submicron and subvisible particle size ranges in terms of particle counts. Our data demonstrates the whole spectrum for both monoclonal antibodies studied. In addition, we also provided a comparison of the data sets between RMM, NTA and Spectradyne (three submicron particle characterization techniques). Data for mAB 1 (Graph 1) and mAB 2 (Graph 2) depict similar trends in terms of particle size vs particle counts. RMM (not shown) and NTA assessment demonstrated significant difference between stressed and unstressed samples. In addition, the number of particles between NTA and RMM appear to differ in certain particle size ranges, with NTA providing higher counts compared to RMM. On the other hand, surprisingly Spectradyne did not provide differentiation between stressed and unstressed samples in the submicron region. This is an interesting observation and will need further efforts to understand the contributing factors. Our assessment shows that even though various submicron particle characterization methods are available, data from each method should be treated with caution and variabilities need to be understood. 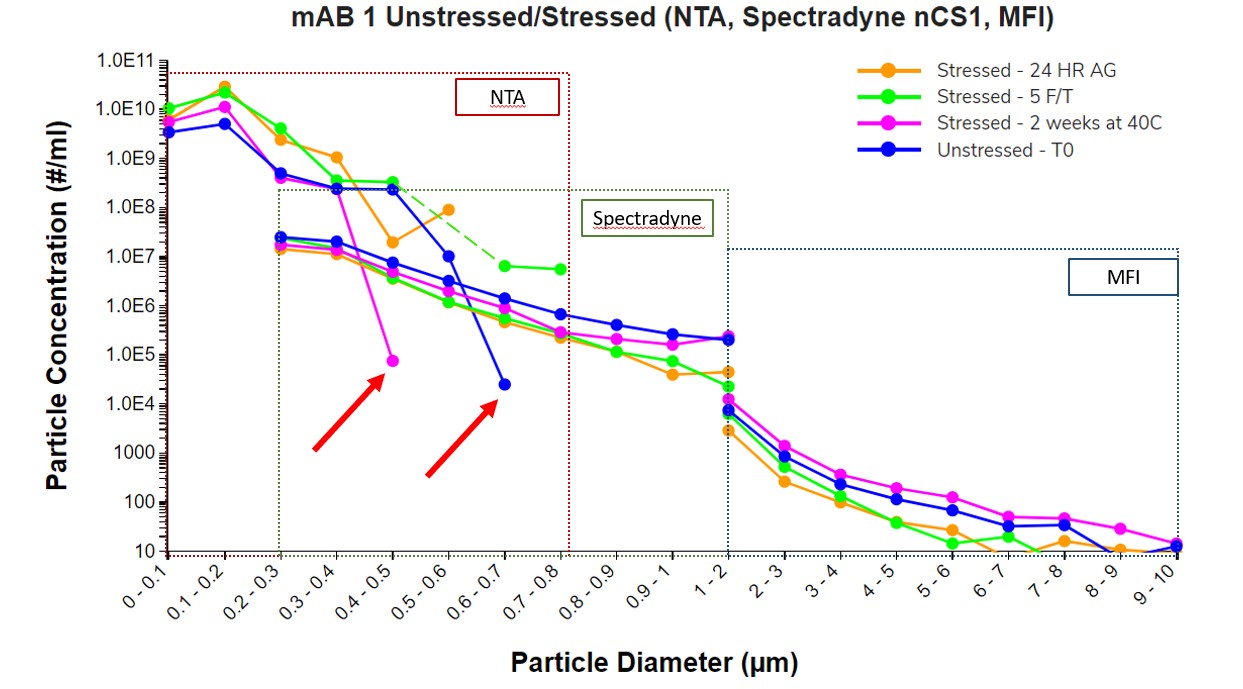 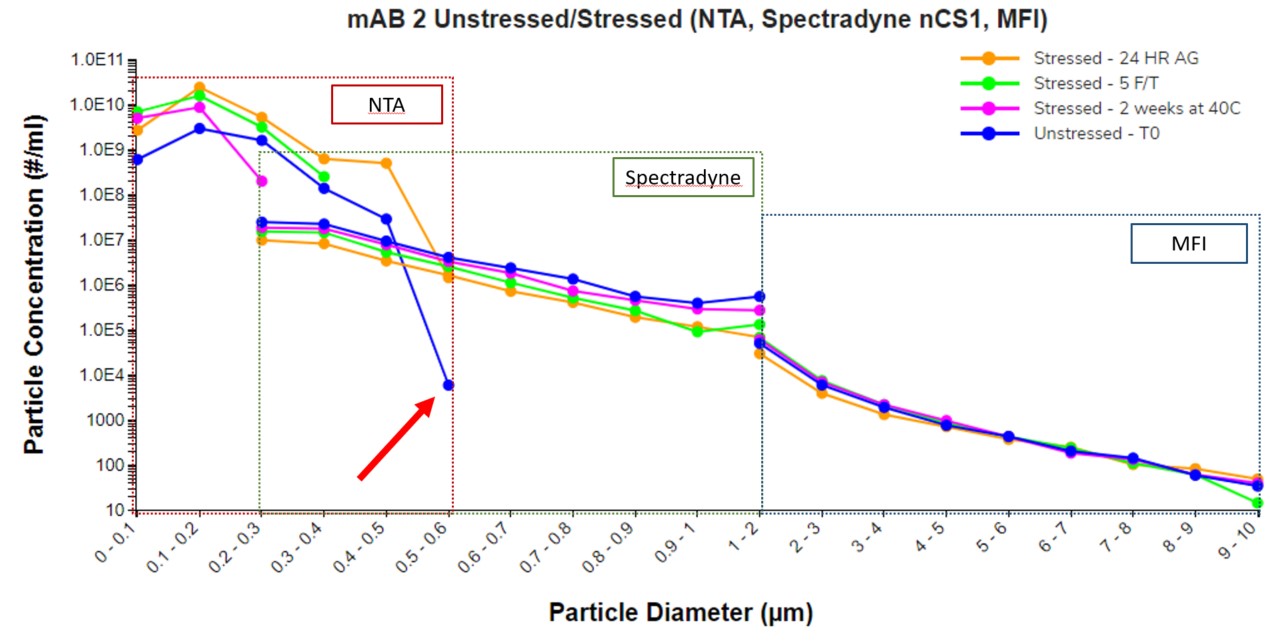