Purpose: In this study we investigate the oral absorption of a macromolecule, octreotide, in dogs when formulated with the permeation enhancer sodium caprate in enteric coated tablets and enteric coated hard gelatin capsules. To better understand the absorption profile of octreotide, paracetamol was included in the formulations as a marker for drug delivery. The second aim was to compare if there is a difference between tablet and hard gelatin capsules with standard enteric coating.


Methods: Tablets were direct compacted and size 000 hard gelatin capsules were filled with powder mixture by hand. The dosage forms contained 25 mg paracetamol, 18 mg octreotide, 550 mg sodium caprate and 160 mg mannitol. Both dosage forms were coated with Eudragit L30D-55 enteric coating from Evonik in a fluid bed dryer. The coating of the dosage forms was identical. The dosage forms were tested for acid resistance (0.1 M HCl, pH 1.1, for 2 hours) and subsequent drug release (phosphate buffer, pH 6.8) in a USP II dissolution apparatus operated at 37 °C and paddle speed set to 75 RPM. Samples were analyzed by LC-UV. The treatments were given to fasted beagle dogs (n=6) and blood samples collected every 30 min up to 7.5 hours post dose. Prior to dosing, the dogs received a dilute HCl solution to obtain a standardized acidic gastric pH. To allow for bioavailability calculations, an intravenous dose of octreotide was also administered. Octreotide and paracetamol concentrations in blood plasma were quantified by LC-MS/MS. Pharmacokinetic analysis was done in Phoenix by performing a non-compartmental analysis. The statistical analysis was performed using a non-parametric two-tailed t-test.


Results: No drug release from either dosage form could be detected during the in vitro acid exposure. The drug release in phosphate buffer was rapid and consistent for both dosage forms with approximately 80 % of the content released in 30 minutes. In all cases, octreotide and paracetamol appeared in plasma approximately at the same time. In the tablet arm, dog two had a late tmax of both compounds; paracetamol absorption rate was slow and indeed, negligible absorption was observed for octreotide. Our interpretation is that the tablet emptied the stomach together with food (the dogs were fed 4 hours post administration) and the presence of food nullified the effect of the permeation enhancer, affecting absorption of octreotide but not paracetamol. This dog was excluded from statistical analysis of pharmacokinetic parameters. In the capsule arm, dog one had no measurable concentrations of neither octreotide nor paracetamol. This is likely due to the dosage form not exiting the stomach for the duration of the sampling time and the enteric coat preventing drug release. This dog was also excluded from statistical analysis of pharmacokinetic parameters.

Mean bioavailability (F) was 1.1 % for both formulations. Mean Cmax was 16 nM for tablets and 22 nM for capsules. Both formulations had a mean tmax of 1.6 hours. There was no statistically significant difference in F, Cmax or tmax between the two formulations, however, the capsule tended to have larger variability in F and Cmax than the tablet. A summary of the pharmacokinetic parameters is presented in Table 1.
Table 1. Pharmacokinetic parameters for octreotide following administration to fasted beagle dogs.

The results indicate that there is no statistically significant difference between enteric coated tablets and enteric coated hard gelatin capsules when delivering octreotide orally. Both formulations give rise to similar plasma concentration-time profiles and both result in a bioavailability of approximately 1 %.

Future work - This work is part of a larger study with the aim of understanding how dosage forms affect the bioavailability of orally administered macromolecules, including sources of variability. 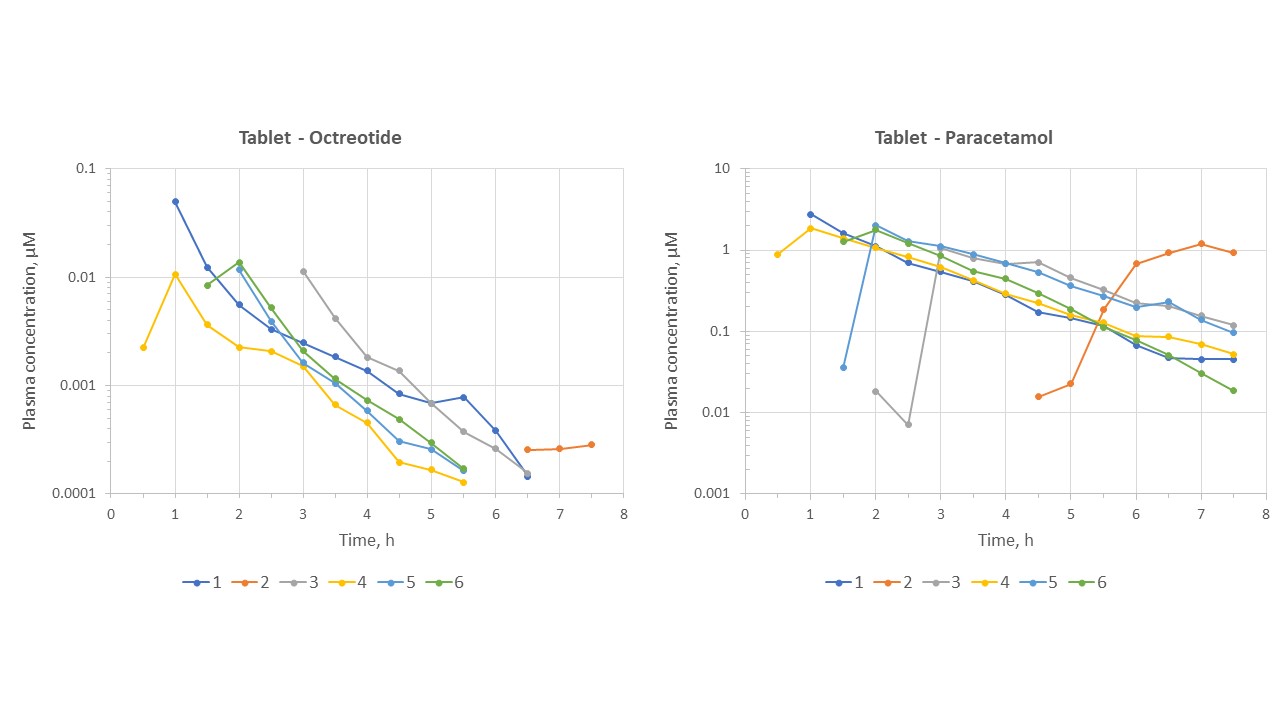 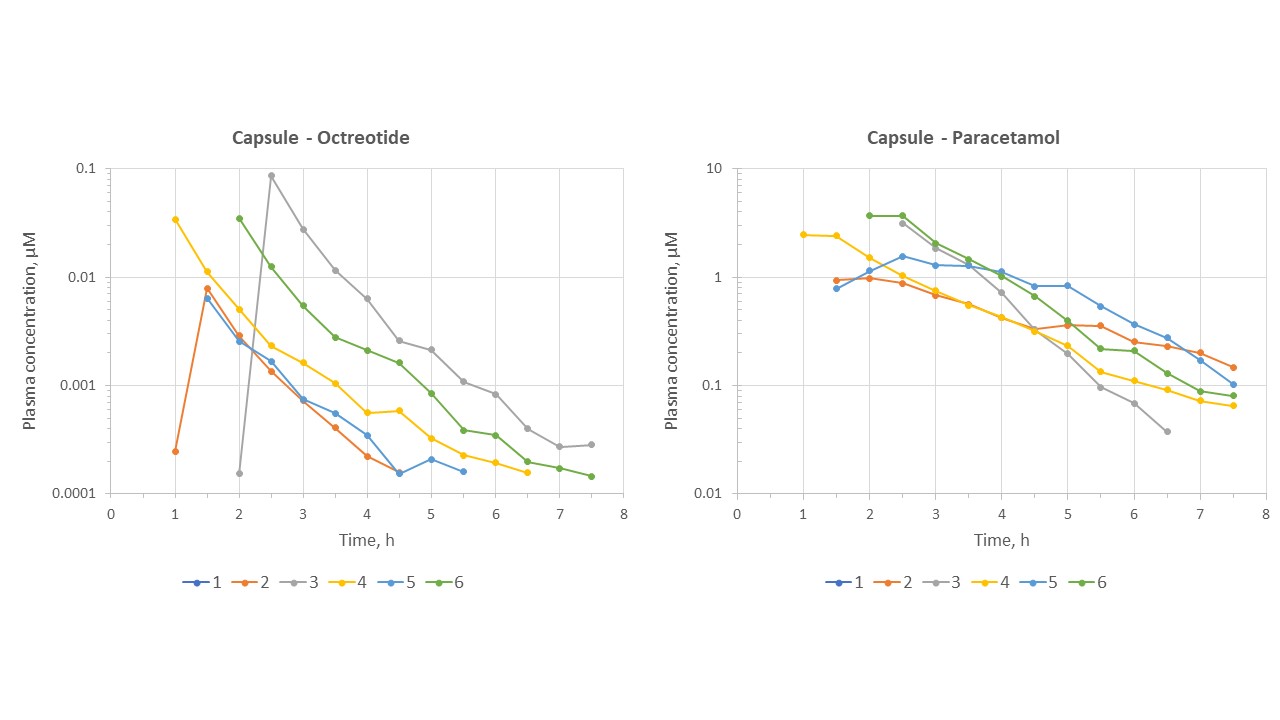