Purpose: Peptides and proteins accounted for 40 % of the new molecular entities approved in 2017. However, the development of long acting peptide formulations for subcutaneous administration still poses challenges. Given their charged nature, peptides and proteins such as Glucagon-Like-Polypeptide agonist (GLP-1) can be entrapped in polyelectrolyte complexes (PECs) formed due to affinity between oppositely charged polymers. These PECS can act as a delivery vehicle to prolong the duration of action of the peptide. In this study poly-lysine-co-histidine (pKH), a biocompatible and biodegradable polymer, was synthesised and complexed with a GLP-1-like peptide (termed ‘G48’) and an ultra-pure form of alginate (ALG). ALG was examined as a co-complexing polymer to mediate the association of G48 to pKH.


Methods: pKH was synthesised by the polycondensation reaction of L-lysine-HCl and L-histidine (Alazzo, 2018). The crude polymer was then dialysed for 48 hours, freeze dried and characterised by 1H NMR (400 MHz, D2O). PECs were prepared by mixing equal volumes of pKH (20 mg/mL), ALG (20 mg/mL) and G48 (2 mg/mL) at pH 7.4 and characterised by dynamic light scattering. To understand the polyelectrolyte complex affinity, isothermal calorimetry (ITC) experiments were carried out by 2 uL injections of the titrant (pKH) into the titrand (200 uL, G48 or ALG) at 25oC and 750 RPM, with a spacing of 150 s between injections. The complex was purified by repeated centrifugation (4000 RPM, 30 min) and the encapsulation efficiency (EE) of the PEC was determined indirectly by high performance liquid chromatography (HPLC).


Conclusion: A hyperbranched polymer (pKH) was successfully synthesised and complexed with ALG and a therapeutic peptide (G48). The complexes formed may provide the basis for a formulation-based approach to modulate the release of SC administered peptides without hampering potency. 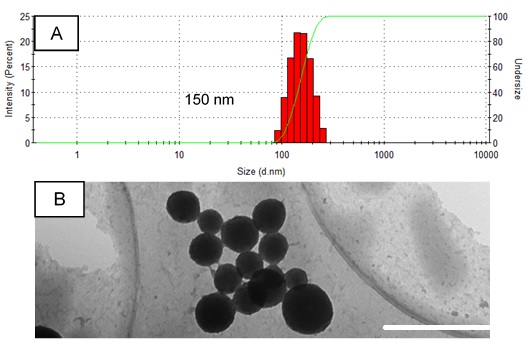