Purpose: Biological therapeutics are established as major contributors to the pharmaceutical pipeline. Many of these biological drugs are lyophilized to preserve their conformation and reduce decomposition during storage and shipping. Therefore, understanding and controlling the effects of lyophilization on protein higher order structure is critical for commercialization of biologics. Hydrogen Deuterium Exchange Mass Spectrometry (HDX-MS) is a well-established technique for studying protein higher order structure. Previous publications have demonstrated a solid state HDX (ssHDX) method for labeling formulated, lyophilized proteins to assess their physical stability during, but this process still suffered from low throughput and undesired back exchange. Recently, our group described a method combining HDX-MS with MALDI to greatly reduce the time of analysis and nearly eliminate H/D back-exchange, but that method was not suited for interrogating solid samples2. This work integrates the two techniques to assess and predict the stability of peptides and proteins following mixing and lyophilization with various excipient formulations.


Methods: Sample mixing and handling were performed using a bench-top robot and programmed data MALDI-MS acquisition allowed for monitoring deuterium incorporation for dried peptides and protein samples following continuous labeling with D2O vapor. Effects of excipients upon peptide stability were also tracked and compared to a control for a three-day labeling time course (TOC figure). This workflow is automated and free from back-exchange. As demonstrated by deuterium retention of bradykinin, these features serve to reduce experimental error normally associated with conventional deuterium exchange experiments.


Results: Deuterium incorporation for bradykinin without excipients is identical to the control data presented, indicating that there is no observable back-exchange. Because of this, we attributed the differences in deuterium incorporation to the excipients themselves. Association between bradykinin and certain excipients increased deuterium incorporation for some labeling states, while some decreased incorporation in others. Further, the behavior of each peptide with certain excipients was different for thermally-stressed sample compared to their unstressed counterparts. Unstressed bradykinin incorporated significantly less deuterium when associated with Atab® and mannitol, showing decreases of 5.1 and 1.8 Da when compared to the no excipient control after 16 hours of solid-state labeling, indicating a large stabilizing effect (Fig 1). Further, this protective effect is maintained during elevated temperatures as bradykinin incorporated 5.5 and 2.64 Da less deuterium after 16 hours of labeling, relative to the control sample. Interestingly, Avicel® only induces a slight protective effect, evidenced by a small reduction in deuterium incorporation at later time points for stressed and unstressed samples; however, the incorporation for croscarmellose is nearly indistinguishable from the control sample suggesting that it does not influence the solid-state stability of the peptide. Excipient association with somatostatin also displayed both stabilizing effects in some labeling states and destabilizing in others. Further, because the incorporation of bradykinin without excipients was similar for stressed and unstressed samples, we can conclude that thermally stressing these samples does not artificially introduce any back-exchange. Because of this, the differences observed with somatostatin at elevated temperatures are validated. The effects of excipients on somatostatin range from slightly destabilizing, with samples incorporating 1.2 Da more deuterium after 4 hours when mixed Avicel®, to slightly stabilizing, with samples incorporating 1.0 Da less deuterium after 3 days when mixed with Atab® relative to the control (Fig 1). Avicel's destabilizing influence is maintained for thermally stressed samples, increasing 1.9 Da in mass after 3 days relative to the control. Interestingly, mannitol and croscarmellose exhibit strong stabilizing effect. There was a 1.2 and 3.5 Da decrease for samples with mannitol and croscarmellose, respectively, after 3 days of labeling (Fig 1). Similar stabilizing effects have been published previously in which authors noted protection against aggregation and decomposition for mannitol with spray-dried samples and Atab®, among other excipients, with thermally treated tablets. Further, given the lack of structure for bradykinin the similarities for stressed and unstressed control samples are not surprising. However, somatostatin does have secondary structural motifs and deuterium uptake differences observed here may reflect a conformational change induced by these excipients.


Conclusion: The proposed union of MALDI-MS and ssHDX can be applied to study higher order structure of proteins and peptides and the effects of added excipients in an environment that closely resembles the storage and shipping conditions of biopharmaceuticals and may be beneficial in giving insights studying protein structural dynamics in solids. 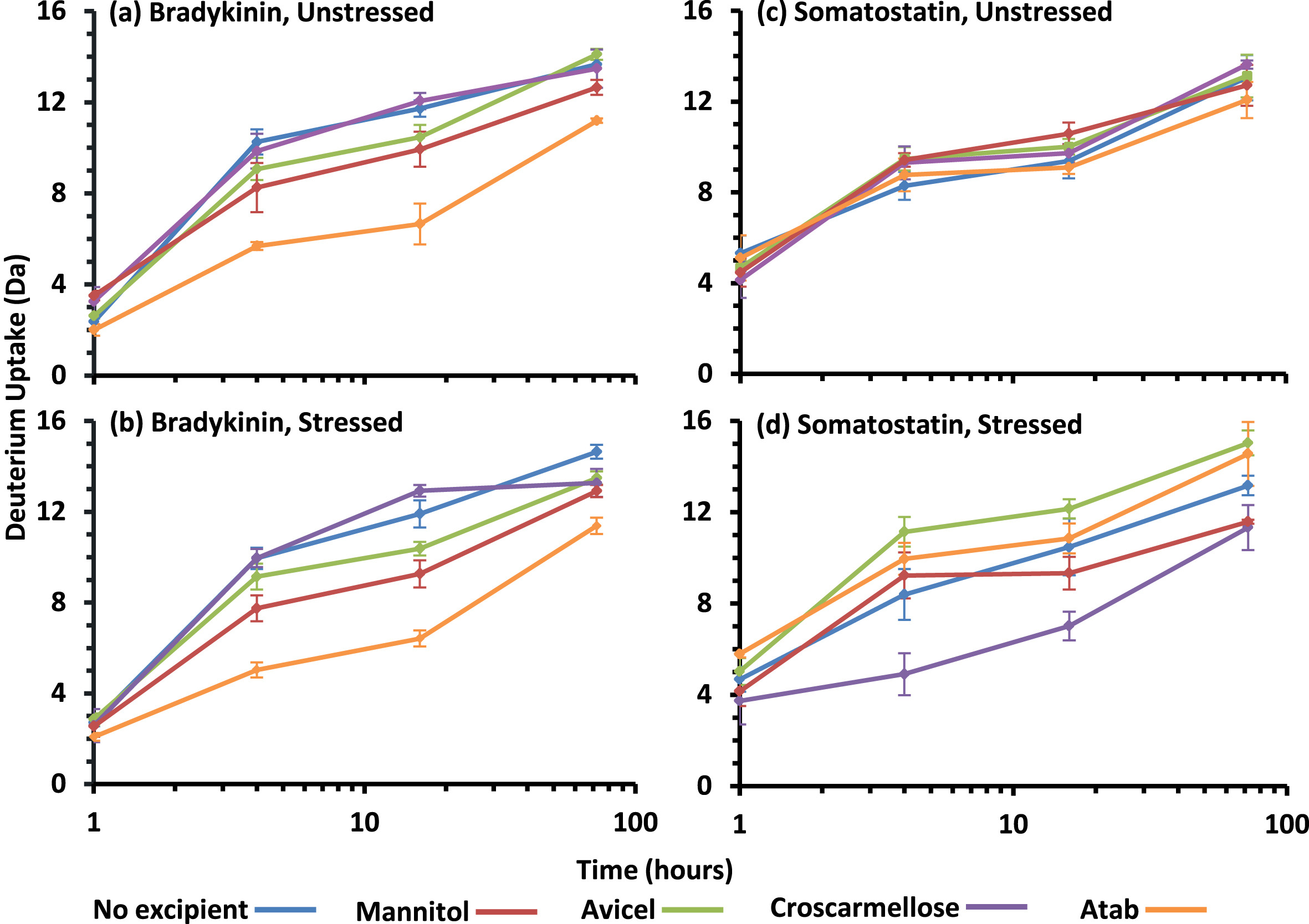