Purpose: Lumefantrine is an anti-malaria drug developed in the 1960s in China to address the increasing resistance of falciparum malaria to chloroquine and other previously used malaria drugs. The drug became available to the market in 2009 under the tradename Coartem where Lumefantrine is co-formulated with Artemether. However, due to the hydrophobic nature of Lumefantrine, it suffers from low bioavailability, and therefore a high number and frequency of dosages is required, increasing the risk of patient non-compliance. Patient non-compliance leads to the development of anti-malarial drug resistance.


Methods: A schematic process flow diagram for the manufacturing process is presented in Figure 1. Four unit operations are included in the manufacturing process, which are flash nanoprecipitation (FNP), flash evaporation (FE), tangential flow filtration (TFF) and spray drying (SD). The FNP step was carried out by mixing four streams of liquid at a total Reynolds number ( > 10000) in a multi-inlet vortex mixer designed in-house (Feng, 2019). Three of the four streams used were anti-solvent (0.211 mM NaOH solution) to the drug molecule while the last stream was a solvent (tetrahydrofuran, THF) to it, containing 7.5 mg/mL of Lumefantrine and 3.75 mg/mL of HPMCAS-126 as a stabiliser. A flow ratio between the anti-solvent streams and the solvent stream of 3:3:3:1 was employed. The FNP suspension generated was processed by a spray dryer (for FE) to remove the solvent used, leaving a THF lean FNP suspension as the output. This suspension was then passed through a TFF unit to separate the excess water from the suspension, resulting in a concentrated FNP suspension. Afterwards, the concentrated FNP suspension was mixed with a cryoprotectant (HPMC E3) at a mass ratio of 1:1 between nanoparticles and HPMC E3 before the suspension was finally spray dried to obtain Lumefantrine nanoparticles. A total 400 L of FNP suspension was aimed for in order to obtain a theoretical quantity of 900 g Lumefantrine nanoparticles equivalent to 300 g of Lumefantrine.


Results: The currently available equipment were used to measure the stability of nanoparticles as presented in Table 1. The stability of FNP suspension was not long enough to withstand the total running time of TFF and SD; in addition, the 10% THF content in the FNP suspension would cause significant particle size enlargement during TFF. For these reasons, a FE process was applied to improve the stability; a decrease of THF content from 10% in the FNP suspension to approximately 2% in the THF lean suspension was obtained from this FE step, reducing the Ostwald ripening effect. A sensible number of sublots may also be employed in the FNP step to ensure no stability issues of FNP suspension would be encountered and limited disruption to the manufacturing process. When 3 sublots are employed, the shortest running time per sublot could be achieved at approximately 0.5 h at Re close to 100000. The TFF step was necessary because otherwise there would be a tremendous volume to be spray dried, making the manufacturing process uneconomical. A concentration factor of 30 was aimed for in the TFF step. After TFF, the concentration of Lumefantrine in the suspension was determined to be 16.26 mg/mL. The increase in particle size during the TFF step was due to the transmembrane force pushing nanoparticles against the membrane, causing a limited degree of agglomeration. The nanoparticles were later removed from the membrane by the shear force from the flow.

The redispersion of Lumefantrine nanoparticles was also carried out with the data presented in Figure 2. The particle size distribution upon redispersion was not hugely different from that before spray drying, especially the mode in particle size distribution was approximately the same. Based on the concentration of Lumefantrine after TFF, a yield of 62% was reached in the SD step.


Conclusion: In conclusion, a scaled-up manufacturing process to produce Lumefantrine nanoparticles has been built and successfully optimised based on stability of nanoparticles. A potential route to address growing concerns associated with low bioavailability of Lumefantrine has therefore been demonstrated. 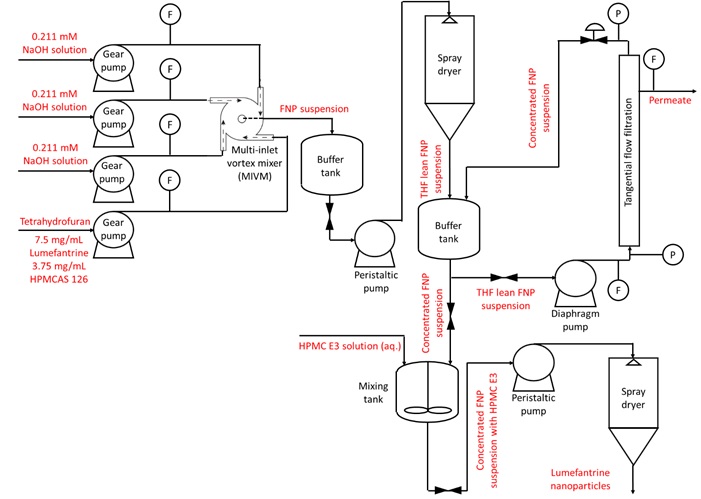