Purpose: DRGT-46 is an orally delivered product for the treatment of a variety of pain conditions. The active entity, celecoxib, is a non-steroidal Cox-2 inhibitor, anti-inflammatory drug that exhibits analgesic and antipyretic activity. The marketed product (Celebrex®) is limited by a long onset of action (50 minutes – 1.5 hours). The intent of the DRGT-46 development program was to decrease this dramatically to less than 10 minutes. DRGT-46 has low water solubility properties and therefore utilization of an enabled formulation technology was essential to achieve an optimal pharmacokinetic (PK) profile and concomitant clinical performance.

An integrated program was designed to accelerate DRGT-46 development, from an initial clinical PK assessment of prototype powder-in-bottle (PiB) formulations, through process development and scale-up, taste optimization, and finally a pivotal PK study comparing the proposed commercial (sachet) formulation with the marketed product (Figure 1). Clinical studies incorporated real-time adaptive GMP manufacturing to enable formulation composition(s) to be adjusted within-study based on arising PK and taste data to maximize the potential for success.


Methods: A spray-dried dispersion (SDD) for delivery as a suspension was developed in order to achieve the target PK profile. The bulk SDD GMP formulation composition and associated manufacturing process was established on a bench scale spray dryer. A confirmation batch was prepared to provide batch analysis and stability data (7 day) to support a clinical trial application (CTA) for the Phase 1 pilot PK study. Following regulatory approval, PiB clinical drug products were manufactured and dosed in real time for each study period without a need for further regulatory interaction. Formulation composition and concentration was determined by arising clinical data from the previous study period. Each batch of product was manufactured, QC tested and QP released within 7 days. The study was performed in 12 healthy volunteers with the potential to assess 100mg and 200mg doses of DRGT-46 in both fed and fasted states.

To identify the formulation composition for the commercial product, the Phase 1 SDD was further developed to screen suitable flavor and sweetener combinations and introduce a small-scale granulation and blending process to support sachet filling. The development program also included the optimization of the SDD powder reconstitution process. Stability data were generated to support both the packaged sachet and the reconstituted drug product prepared at bedside.

A two part clinical study was then performed to screen/select an optimal flavor/sweetener system (Part A) and conduct a pivotal PK assessment between the test and reference products (Part B). Representative batch analysis and short-term stability data were again generated to support an Investigational New Drug (IND) submission. For taste assessments GMP SDD and flavor / sweetener combinations were provided to a clinical pharmacy and a matrix of products prepared just prior to dosing. A sip and spit clinical protocol was executed to identify lead flavor / sweetener based on sensory attributes. A total of 8 test formulations were screened in 12 subjects on two separate clinical visits.

Data emerging from the taste assessment study were then used to inform the real-time manufacture of the SDD drug product formulation composition for the pivotal PK assessment in Part B, in which 20 subjects were dosed in a 5 period randomized design with 100mg DRGT-46 (fed and fasted), 200mg DRGT-46 (fasted) and 200mg reference product (fed and fasted).


Results: The pilot PK study demonstrated “proof-of-concept” with efficacious plasma concentration levels (250ng/mL) achieved within an average of 12 minutes of dosing in both fed and fasted states (Figure 2). Although the presence of food delayed Tmax and lowered Cmax, there was no change in overall exposure. DRGT-46 showed dose-proportional changes in Cmax and AUC between 100mg and 200mg.

Following formulation and process optimization, an acceptable sweetener/flavor systems was successfully identified by a human palatability study. Data for various sensory attributes were quantified via a 9 point scale questionnaire. The lead SDD formulation was then manufactured and dosed in the pivotal PK assessment. DRGT-46 was rapidly absorbed with Tmax values and C250 values 3.4 times and 7 times faster than the reference product (Table 1). Overall AUC was dose proportional across the dosage forms. Mean exposure in the fed state was slightly higher for both reference and DRGT-46 formulations. 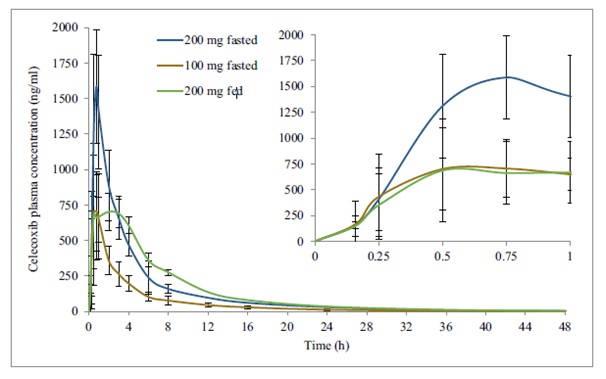