W0930-09-62 - Human In Vitro Metabolism and Disposition of Pterostilbene

Purpose: Pterostilbene (PT) is a naturally occurring, stilbene derivative that exists in cis and trans forms, with the trans form being most abundant. In vitro and in vivo studies have shown PT to possess various beneficial health effects such as in pathological conditions such as metabolic diseases and cancer. A trend towards non-linearity was observed in both the intravenous and oral pharmacokinetics of PT with increasing doses in rats, thus indicating dose-dependent pharmacokinetics. Previous evidence suggests that phase II metabolism, particularly sulfation, is the chief clearance pathway of PT in rats, with a minor contribution of the glucuronidation pathway. The purpose of this project was to synthesize the sulfate (PTS) and glucuronide (PTG) metabolites of pterostilbene (PT) and develop an HPLC method for their identification in human in vitro studies. Following that, metabolic and protein binding studies were conducted.


Methods: PTS was synthesized by reacting PT with a solution of sulfuric acid and acetic anhydride in pyridine. PTG was synthesized by reacting PT with acetobromo-α-D-glucuronic acid methyl ester followed by deprotection with alkaline hydrolysis using aq. NaOH. Both PTS and PTG were purified from their respective reaction mixtures by using liquid-liquid extraction and column chromatography. The identity and the purity of the synthesized metabolites were confirmed by using NMR and LC-MS, respectively. For the chromatographic separation of the three analytes, a Waters LC-MS system was used. The analytes were separated on a Cogent Bidendate C18 column (75 × 4.6 mm, 4 μm, Microsolv Technology Corporation, Leland, NC). The mobile phase consisted of 5mM ammonium formate (pH = 8.0) and methanol with a gradient mixing program. The analytes were detected using an Acquity QDa mass spectrometer (Waters Corporation, Milford, MA) operating in negative ion detection mode ([M-H]- m/z: PT = 255.00, PTS = 335.30, PTG = 431.00). The PTS formation time course was studied in pooled human intestinal or liver S9 fractions (HIS9 or HLS9) up to 4 h. PT (0.3 – 100 μM) was incubated with either HIS9 or HLS9 (final S9 protein concentration = 0.2 mg/mL) along with the sulfation reaction cofactors (PAPS, ATP, Na2SO4, MgCl2), and the formation of PTS was monitored. Rapid equilibrium dialysis (RED) device was used to measure the protein binding of PT in three human plasma samples and pooled human S9 fractions (final S9 protein concentration = 0.2 mg/mL). The protein solution containing PT (10 μM) was added to the sample chamber and PBS was added to the buffer chamber. The chambers were sealed and incubated at 37 ˚C at approximately 250 rpm on an orbital shaker, and aliquots were collected up to 18 h. The fraction of unbound PT (fu) was calculated as the ratio of buffer chamber PT concentration to sample chamber PT concentration.


Results: The chemical synthesis of the sulfate and glucuronide metabolites was accomplished using the specified procedure, as demonstrated by LC-MS data [PTS m/z = 334.99, PTG m/z = 431.00] corresponding to the expected m/z of the biosynthesized metabolites. The mobile phase gradient was optimized to have well-defined separation of PTG, PTS, and PT without any interference. The retention times for PTG, PTS, and PT were 2.95, 5.41, and 6.57 min respectively. It was seen that the formation of PTS was linear up to 1.5 h for both HIS9 and HLS9 (Figures 1 and 2). In both systems, a similar trend was seen where the PTS peak area increased up to 30 μM PT, and decreased at 100 μM PT. The fu values for PT at different incubation times in both the plasma samples and the S9 fractions were determined (Figure 3). The results showed that the protein binding equilibrium was achieved at 3 h for plasma, and 4 h for both HIS9 and HLS9. Beyond 8 h, degradation of the protein samples was seen which led to those results being unreliable. The fu values were found to be 0.19 ± 0.11, 0.43 ± 0.05, and 0.33 ± 0.05 for plasma, HIS9, and HLS9, respectively.


Conclusion: Both metabolites of PT – PTS and PTG – have been successfully synthesized which were subsequently separated chromatographically and detected using an MS system. The linearity of PTS formation in both HIS9 and HLS9 was determined over a range of PT concentrations. The decrease in PTS formation at 100 µM suggested possible substrate inhibition of sulfation, consistent with previous reports of lower sulfation rates at higher doses of PT in rats. Protein binding studies of PT were performed and the fraction of PT free in the plasma and S9 homogenates was determined. It was seen that PT was moderately bound to plasma (~80% bound). 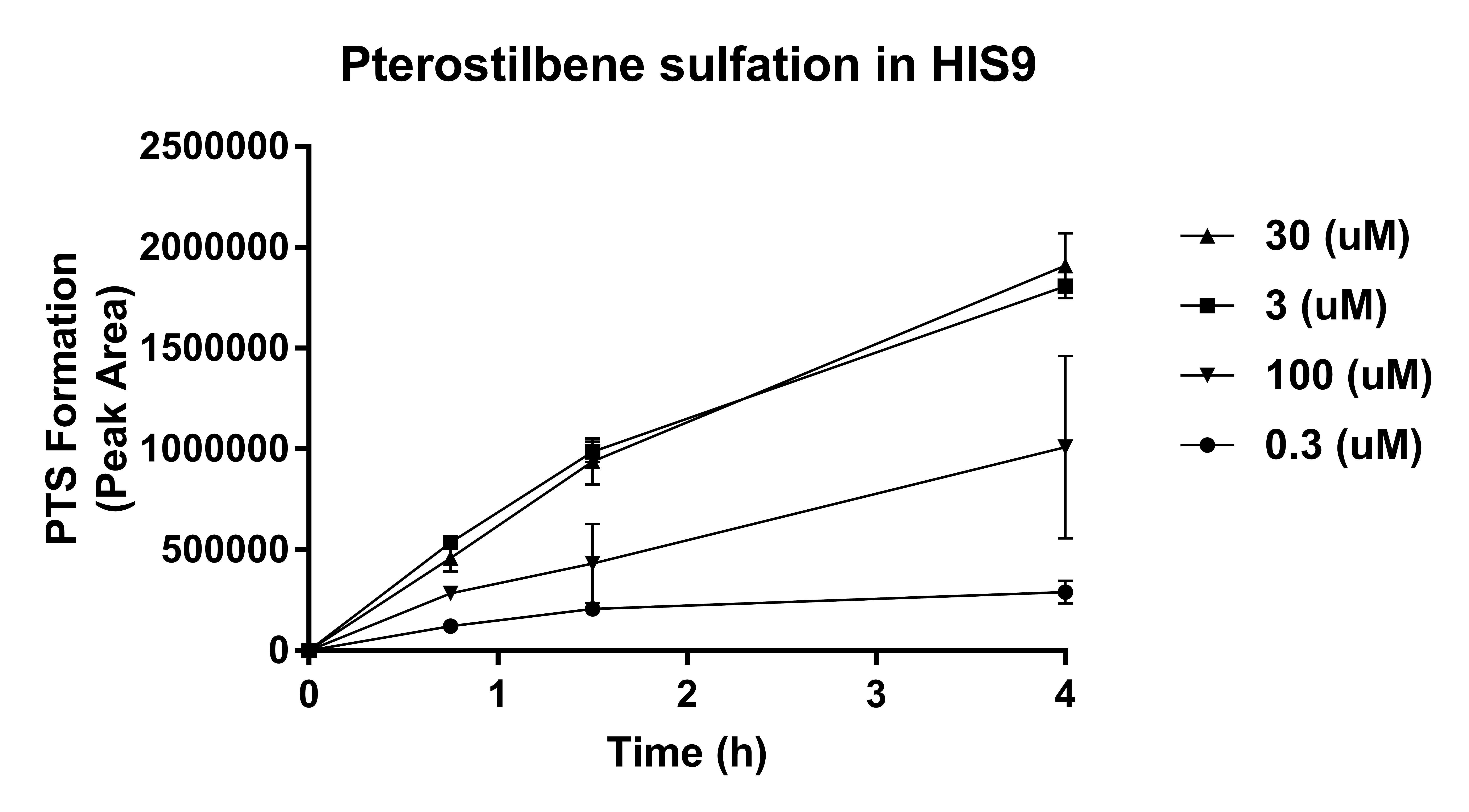 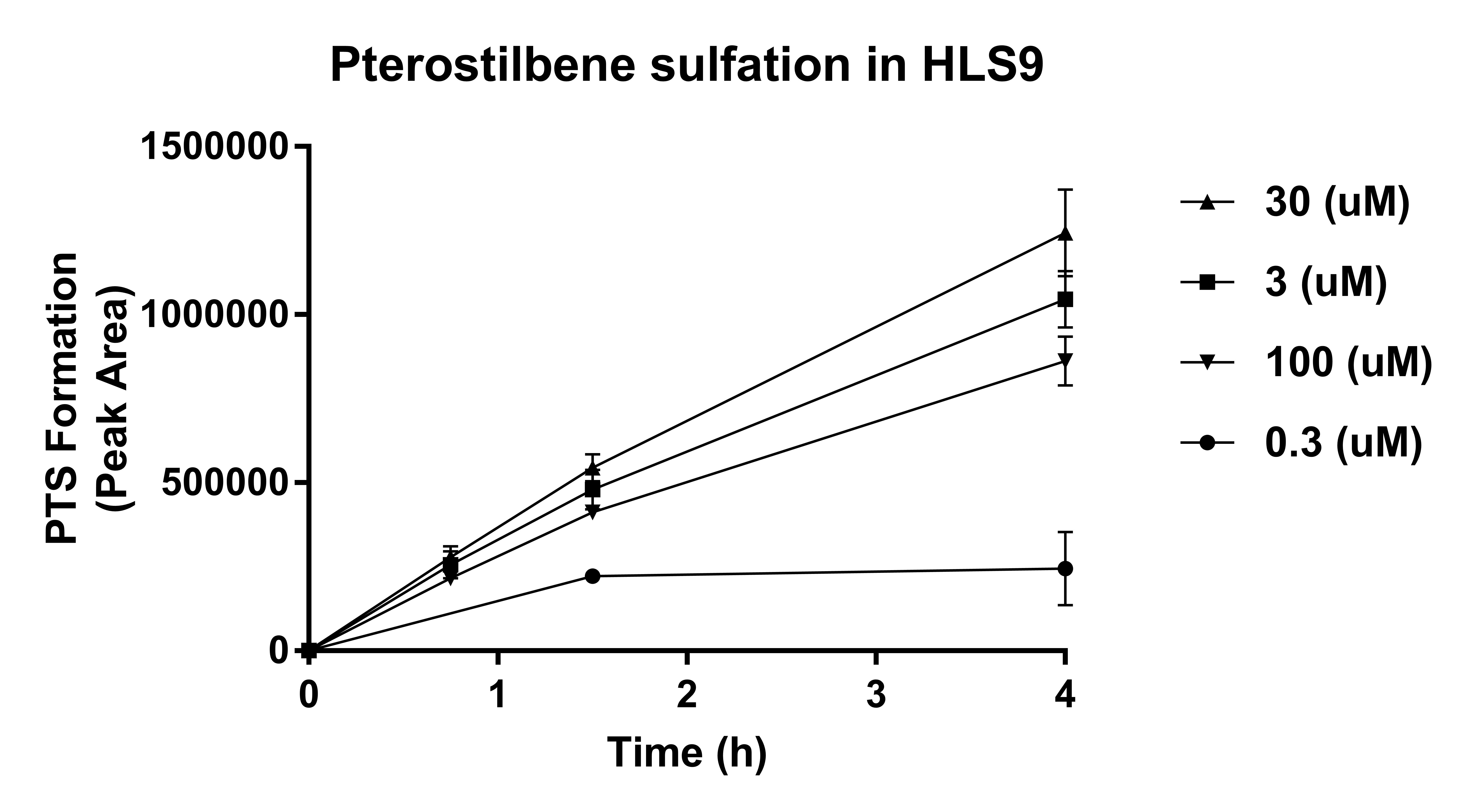 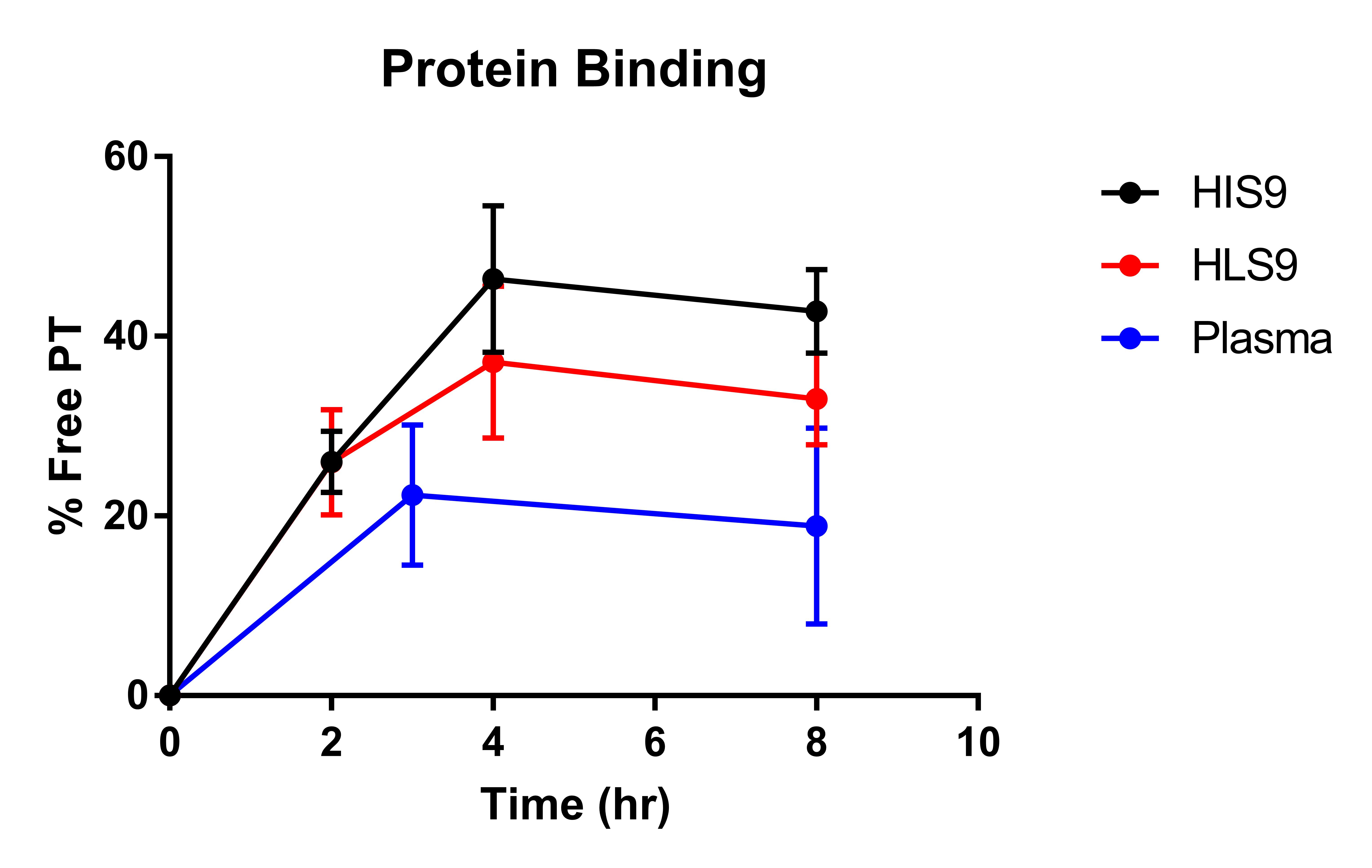