Purpose: In cosmetics, adenosine (AD) has been known to restore skin tissues because it can stimulate collagen matrix formation directly by acting at A2A and A2B adenosine receptors [1]. Niacinamide (NI) is a powerful antioxidant and reduces melanin production in the dermis. Causing anti-wrinkle effects both adenosine and niacinamide have high water solubility and low skin permeability. Thereby, it is very challenging to deliver these compounds to the skin. Among various pharmaceutical technologies such as liposomes, solid lipid nanoparticles (SLN) emulsions or microemulsions. SLN have been extensively used to promote the permeability of drugs across the skin. SLN is also expected to ensure the intimate contact to the stratum corneum and enhance skin hydration by an occlusive effect [2]. This study aimed to develop SLN system for co-delivery of adenosine and niacinamide into the skin tissues. This study was designed to develop novel SLN to deliver AD and NI simultaneously to demonstrate and anti-wrinkle and skin whitening effects. The SLN were evaluated for the characteristic of nanoparticles, release of AD and NI permeability of AD and NI across reconstructed human skin tissues.


Methods: AD and NI-loaded SLN (AD-NI SLN) were prepared by a modified double emulsion method and a hot high-pressure homogenization technique. The compositions of the SLN formulations (F1-F9) are presented in Table 1. Briefly, the oil phase containing stearic acid and span 80 was melted at 80°C. The aqueous phase containing AD and NI was added to the molten oil phase and homogenized using at 5000 rpm for 2 min to produce a primary water-in-oil (W1/O) emulsion. The primary emulsion was then added to the hot aqueous solution containing poloxamer 188 (2%). Thereafter, the mixture was preliminarily homogenized using the same homogenizer at 3000 rpm for 2 min, and the double emulsion was homogenized in high pressure Nano DeBEE homogenizer for 3 cycles under 1300 bar and rapidly cooled down using an ice bath and the SLN were stored at 4°C prior to use. The characteristics of SLN prepared were evaluated, such as particle size, polydispersity index (PDI) and zeta potential. The encapsulation efficiency (EE) and loading amount (LA) of AD and NI in SLN were examined by a centrifugation method. The in vitro release study was performed using a dialysis bag (MWCO = 12-14,000 Da, Spectrum Laboratories Inc., USA) method. For the assessment of skin permeation of AD and NI loaded in SLN, reconstructed human epidermis tissues (SkinEthicTM, EpiSkin, France) were used. The drug concentration in skin permeation test and in vitro release studies were quantified by HPLC method.


Results: The mean particle size of SLN ranged from 176.73 to 436.93 nm. With increasing amount of stearic acid, generally, an increase in the particle size had been observed. The PDI of SLN was found to be less than 0.3 in all the SLNs regardless of varying concentrations of span 80 and stearic acid that indicated uniform size distribution in all formulations. The zeta potential of NI-AD SLN were determined in the range of -30.13 to -40.07 mV implying that all the formulations were stable in term of dispersion stability. EE and LA of SLN was in the range of 50.4-61.65 and 16.23-29.13% respectively. AD and NI are highly hydrophilic drugs (log P = -0.37 and -1.05 respectively). The problem of efficient encapsulation of hydrophilic drugs can be overcome by using the double emulsion technique. The in vitro release profile curves of NI and AD loaded SLN were presented as the cumulative percentage release (Figure 1). F8 exhibited maximum drug release profile because dissolution increased with the increasing concentration of stearic acid, and F3 exhibited maximum cumulative amount of adenosine permeation which was highest among all the formulations with diameter of 176.7 nm. However, the mean particle size of F8 (436.93 nm) displayed minimum skin permeation. This variation might be because of particle size as it was difficult for larger SLN to penetrate into the skin. The same pattern was followed by niacinamide permeation into skin (Figure 2).


Conclusion: SLN was successfully formulated for the delivery of AD and NI simultaneously through the skin. Consequently, SLN interacted with the epidermis because of its lipid composition and small particle size, and thus made feasible drug permeation into the skin. Double emulsion technique improved EE and LA. In addition, use of stearic acid improved in vitro release profile of the drug. In short, AD-NI SLN could be used as an effective topical drug delivery system for anti-wrinkle and whiting agents.>

Acknowledgement: This work was supported by the Industry Technology Development Program (10077593) funded by the Ministry of Trade, Industry & Energy (MOTIE, Korea). 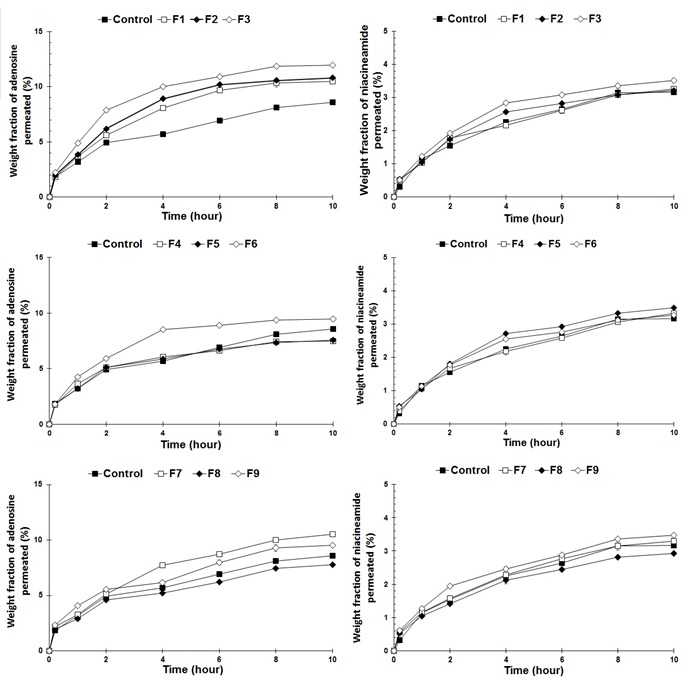 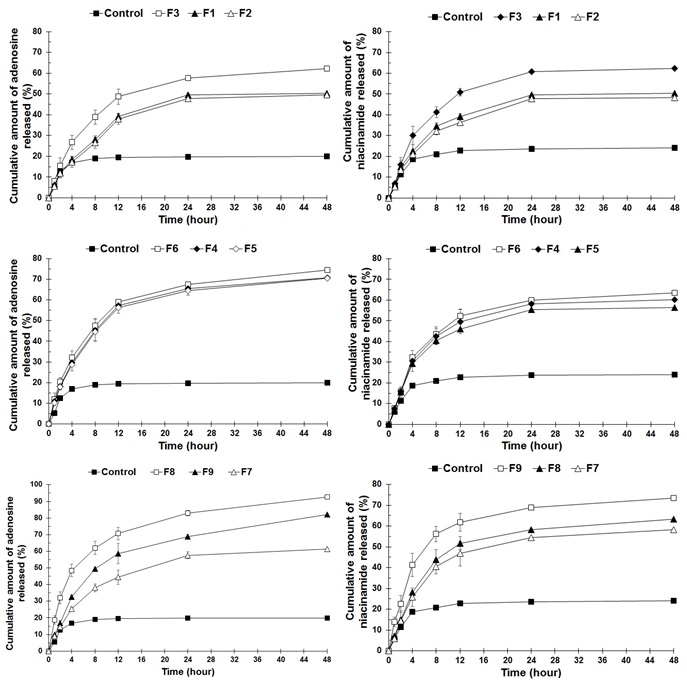