Purpose: Celecoxib (CLC), a selective cycloxyggenase-2 inhibitor, is one of the frequently prescribed drugs for the treatment of inflammatory diseases. The CLC is classified as the BCS Class II drug, showing high permeability and low aqueous solubility and thus the low aqueous solubility of the drug is the limiting factor for obtaining high oral bioavailability [1]. Many pharmaceutical techniques could be applied to improve the oral bioavailability of BCS Class II drugs such as mixed micelles, liposomes, emulsions as well as solid dispersion (SD) systems. Among the various pharmaceutical formulations, the SD system has been successfully applied to improve the aqueous solubility of poorly water soluble drugs. The SD induces the drug to be disperse as amorphous state into solid matrices [2]. Phosphatidylcholine (PC), one of the phospholipids, has an amphiphilic property and consequently expects to show solubilizing potentials of hydrophobic drugs such as CLC [3]. In this study, we aimed to design CLC-loaded PC-based SD system to improve the dissolution of CLC.


Methods: The formulations of CLC-loaded SD systems were prepared with PC, NEU and different hydrophilic materials by the solvent evaporation method. The compositions of the formulations are presented in Table 1. Then the mixtures were evaporated in hood by hair drier, and filtered through 100 µm sieve. For CLC powder, PC, NEU, CCS and F7, the X-ray powder diffraction analysis was conducted with X-ray powder diffraction spectrometer (D8 Advance, Bruker AXS GmbH, Karlsruhe, Germany) under 6 deg/min scan speed, range of 3~40º at 2θ, and 0.02 step size. Next, for the in-vitro dissolution study, the CLC-loaded SD equivalent to CLC 20 mg, the CLC powder (20 mg) and commercial CLC tablet (CLC 200 mg) were added into distilled water (900 mL) and performed by USP dissolution Apparatus II (100 rpm and 37ºC). The dissolution media (2 mL) were withdrawn after 0.25, 0.5, 1, 2, 4, 6, 8 and 10 h, and the same volume of distilled water was refreshed. The withdrawn samples were analyzed by HPLC as following previous study [4].


Results: Highest drug release behavior was observed at F3 because the percent of dissolved CLC was increased with increasing the concentration of PC (Figure 1A). In this formulation, PC was utilized as a carrier and potential solubilizing agent because of its amphiphilic properties [5, 6]. At the end of experiment, all of the CLC-loaded SD showed 100 % of drug dissolution, but CLC powder still presented drug dissolution less than 1 %. However the CLC-loaded SD was undesirable to design oral dosage form due to the lipidic texture. To address this issue the NEU was used to solidify the PC-based SD system and mask the texture. Nevertheless, all the formulations presented very low amount of drug released (6 %) as displayed in Figure 1B. The CLC might be adsorbed into the porous structure of NEU, thereby it made the drug difficult to be released. Therefore, hydrophilic materials were added to facilitate the water permeation into the formulations, and Figure 1C demonstrates the high drug release was attributed by hydrophilic excipients which facilitated the dissolution of CLC. Especially, in Figure 1D, F7 exhibited the significant improvement of drug release (13.981±0.0796 %), when comparing with commercial CLC tablet. This result could be explained by the XRD analysis (Figure 2). There were distinct XRD patterns in CLC powder, implying that the pure drug exhibited the high crystalline state. However F7 illustrated no intrinsic peaks of CLC powder obviously, because the CLC might be dispersed in the PC in the amorphous state.


Conclusion: The CLC-loaded PC-based SD was developed to enhance the dissolution of CLC as well as to mask the lipid texture. The hydrophilic excipients were necessary to increase aqueous solubility of CLC by PC-based SD. The dissolution rate of CLC was significantly enhanced by the PC-based SD owing to the amorphous state of CLC dispersed in the PC matrices, demonstrated by DSC. In conclusion, the PC-based SD could be useful for improving the oral bioavailability of poorly soluble drug such as CLC.

Acknowledgement: This study was supported by the National Research Foundation of Korea (NRF) grant funded by the Korea government (MSIP) (No. 2015R1A5A1008958). 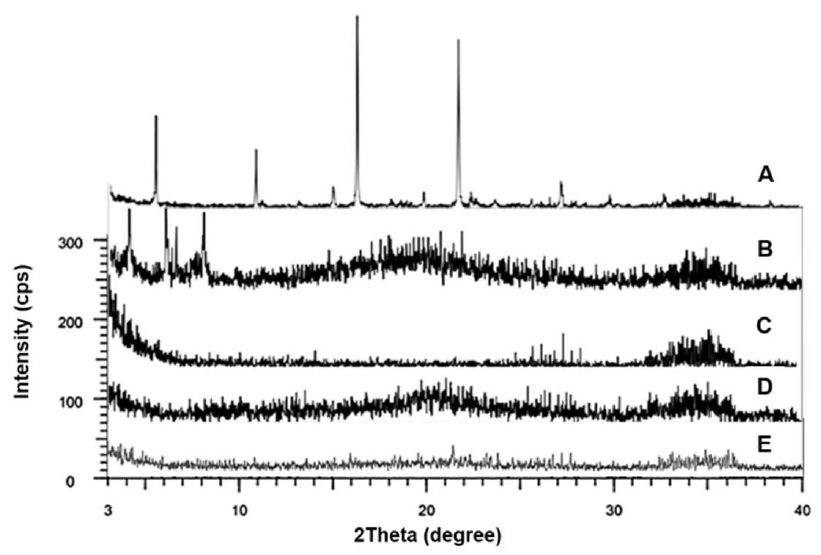 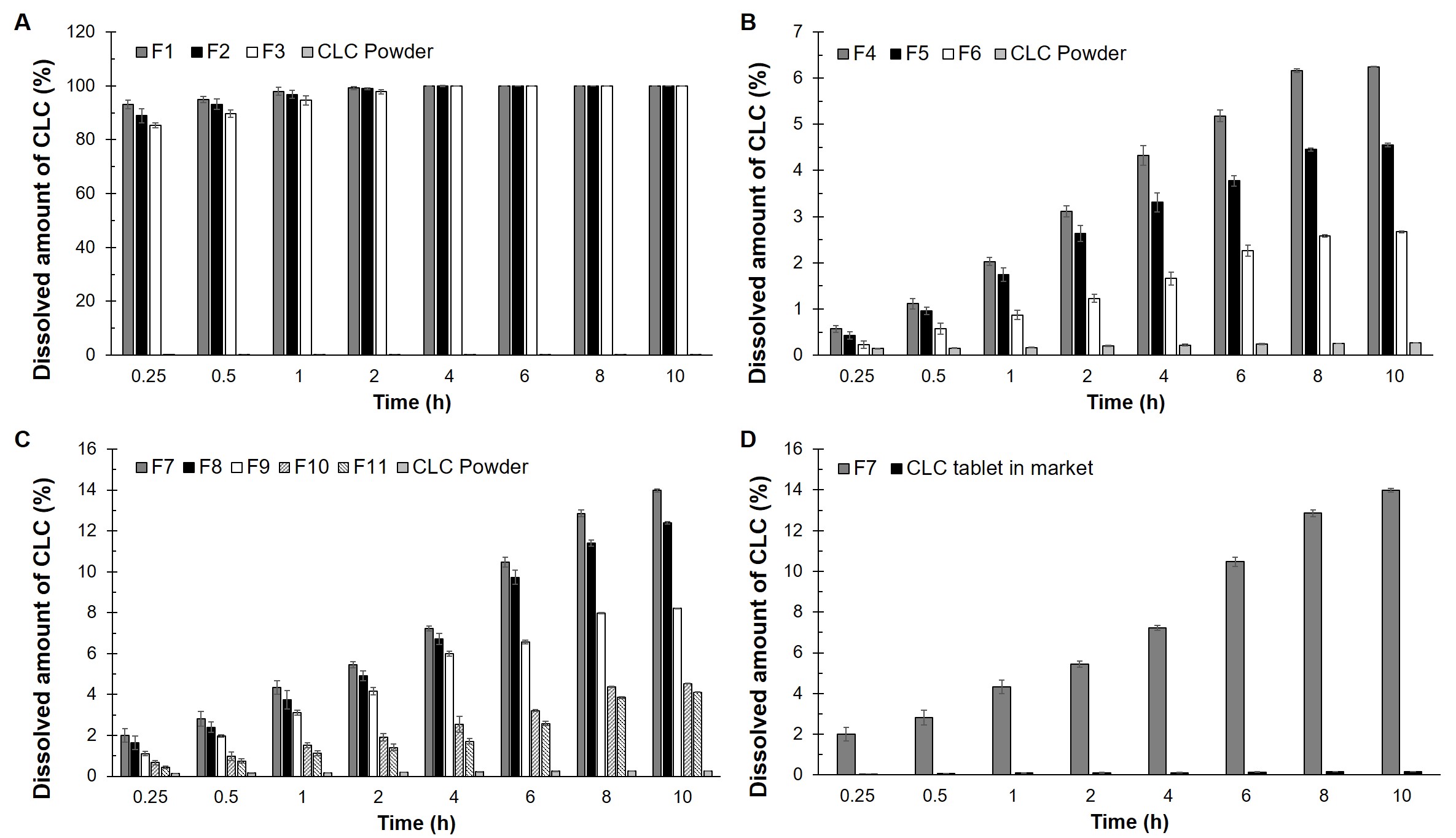