Purpose: Among strategies investigated to enhance transdermal delivery of drugs, microneedle revealed a firm commitment for enhancing the transport of drug molecules across the skin. Here we evaluated dissolving microneedles, (DMNs) for their effectiveness in enhancing transdermal delivery of donepezil. Pharmacokinetic parameters from transdermal application of DMNs and subcutaneous administration of donepezil to rats were compared to understand absorption mechanism of donepezil from the DMNs. To understand the effectiveness of the dissolving microneedle array in increasing the permeability of the drug molecule across the skin, a needle-less donepezil transdermal patch was applied to the rat skin. Plasma samples were collected and the concentration of donepezil was measured for 72 hours using a validated LC-MS/MS method.


Methods: A sensitive and robust HPLC-MS/MS method was developed and validated for the quantification of donepezil in plasma and further applied to pharmacokinetic studies involving dissolving microneedles (DMNs).

DMNs were applied to the back of the rat by pinching the rat skin and using firm thumb pressure. One DMN with a film of donepezil atop the array was applied to each rat. The DMNs removed from the rat skin after either 1 or 72 hr depending upon the experimental design.

Liquid-liquid extraction with methyl ter-butyl ether was employed to extract donepezil from rat plasma with escitalopram as internal standard. Five microliter of the reconstituted sample was injected into the LC-MS/MS for analysis.


Results: DMN mediated delivery of donepezil (72 h) in comparison to subcutaneous administration showed a sustained release effect of donepezil from the formulation. The terminal half-life for donepezil after DMN application was 23.05 ± 10.33 h, which is much longer than that of subcutaneous administration group (2.02 ± 0.39 h). In addition, Tmax for dissolving microneedles was in the range of 0.25 — 0.50 h. It might be due to quick dissolution of the DMN array followed by release of the content from the backing layer. Furthermore, donepezil from the both study groups DMN 1 h and SC administration followed the same fate suggested that sustained release phenomenon is present as long as DMN remains attached to the skin. The results after analyzing the samples of donepezil patch with no needle application shows that little or no donepezil HCl was absorbed through the skin layer.


Conclusion: In conclusion, DMN mediated administration of donepezil has a long half-life as compared to SC administration that can be useful to prolong dosing interval. The early Tmax and longer terminal half-life of DMNs can be suited for purposes where quick onset of drug action is desired by acting as bolus drug administration followed by a sustained release from the layer of drug atop the array. The continuous absorption of the donepezil was from the layer atop the DMN as evident by DMN 1 h administration. Furthermore, DMNs effectively allowed for the transdermal delivery of donepezil as compared to other transdermal patch system. 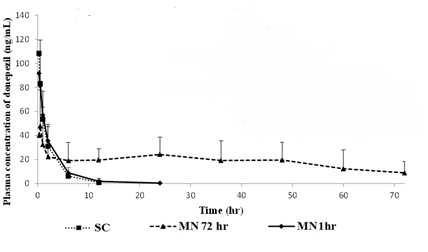