Purpose: Identification and quantitation of drug metabolites is an essential part of the drug discovery. High sensitivity and accurate mass analysis are required to detect and identify low levels of potentially undesirable metabolites. High levels of chemical background and matrix effects interfere with the ability of mass spectrometers to analyze metabolites. Conventional flow can handle multiple specimens, but it may be insufficient to detect minor metabolites due to the lack of sensitivity. Meanwhile, nanoflow helps to enhance the signal, but the analytical time becomes longer and does not satisfy all the user’s requirements. In this work, we demonstrate the ability of the micro-flow LC system with a high-performance Q-TOF to detect low levels of drug metabolites.


Methods: Authentic standards of buspirone and nefazodone were subjected to in-vitro metabolic processing with human liver microsomes. Reactions was pre-incubated by adding 10μL of target compounds to 80μL of microsomes from human male liver at 0.25mg/mL in potassium phosphate buffer (pH 7.4) and waiting 5 min at 37 °C. Then after 5 min, NADPH was added to start the reaction. After 60 min, 20 μL of stop solution was added. Samples were analyzed by a newly developed micro-flow interface coupled with a high-performance Q-TOF after centrifugation to remove particulates. Less than 5 μL/min of LC flow and C18 column was used for all targets and metabolites separation. The acquisition time was less than 15 minutes to maintain throughput. LC and MS interface conditions were optimized to maximize performance. MS1 Scan and data-dependent tandem MS analysis with CID was carried out to characterize drug metabolites. Data analysis was performed to detect and tentatively identify metabolites using accurate mass analysis.


Conclusion: This analysis improved sensitivity for analysis of in-vitro drug metabolites, while maintaining throughput and robustness. By using micro-flow, all metabolite peaks had improved signal and the better sensitivity would help to
discover potentially toxic metabolites of drugs not detectable with conventional flow. The better results were achieved without sacrificing analytical run time and the data stability was also equivalent to conventional flow. Analytical data showed that the stability was maintained even at low flow rate. 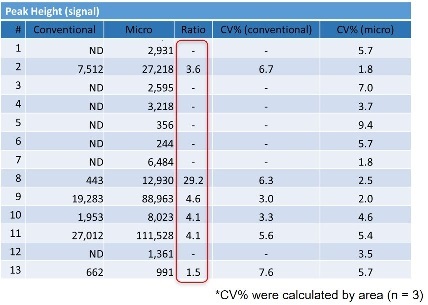 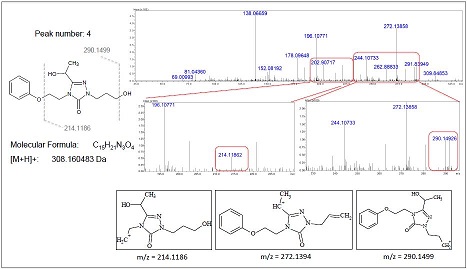