Methods: Three grades of Syloid®, namely Syloid® 3150, Syloid® 3050 and Syloid® 244 FP possessing particle size of 150 µm, 50 µm, and 3.5 µm and average pore volume of 1.70 cm3/g, 1.69 cm3/g and 1.60 cm3/g, respectively, were used. Indomethacin, which is a poorly water-soluble, crystalline drug was used as a model drug. The drug was loaded into Syloid® using solvent impregnation method. The drug solutions containing three concentrations of indomethacin, i.e. 100 mg/ml, 300 mg/ml and 500 mg/ml, were prepared by dissolving indomethacin into dimethyl sulfoxide (DMSO). The Syloids®, in the ratio of 160 mg of Syloid® for 1 mL of drug solution, were then immersed in the drug solution for 1 hr with continuous stirring. The drug solution containing Syloid® were vacuum filtered, and the loaded Syloids® were dried for 24 hrs at 70°C. Any remaining amount of moisture or residual solvent was removed by storing the loaded Syloid® samples in a desiccator maintaining 10% RH at room temperature for 24 hrs. Differential scanning calorimetry (DSC) was performed to determine possible crystallization of indomethacin on the surface or inside the pores of Syloid®. The amount of indomethacin loaded into Syloid® was determined using helium pycnometer and ultraviolet spectroscopy. Helium pycnometer was used to determine the drug loading by determining the difference between the true density of the drug-loaded and plain Syloid® using the relationship, q = 𝜌𝑃𝑆𝑖− 𝜌𝑠𝑎𝑚𝑝𝑙𝑒/𝜌𝑃𝑆𝑖− 𝜌𝑑𝑟𝑢𝑔, where q is the amount of drug loading, 𝜌PSi, 𝜌sample, and 𝜌drug are the true densities of the plain silica, the drug-loaded silica, and the drug, respectively. The drug payload was also determined by UV spectroscopy at a wavelength of maximum absorbance at 318 nm.


Conclusion: Syloids® are excellent drug delivery carriers; however, the mechanism of drug loading in Syloids® is poorly understood. The study results add a piece of knowledge to the existing information and demonstrate the significance of particle size of silica and the concentration of the drug solution on the drug loading in Syloid®. 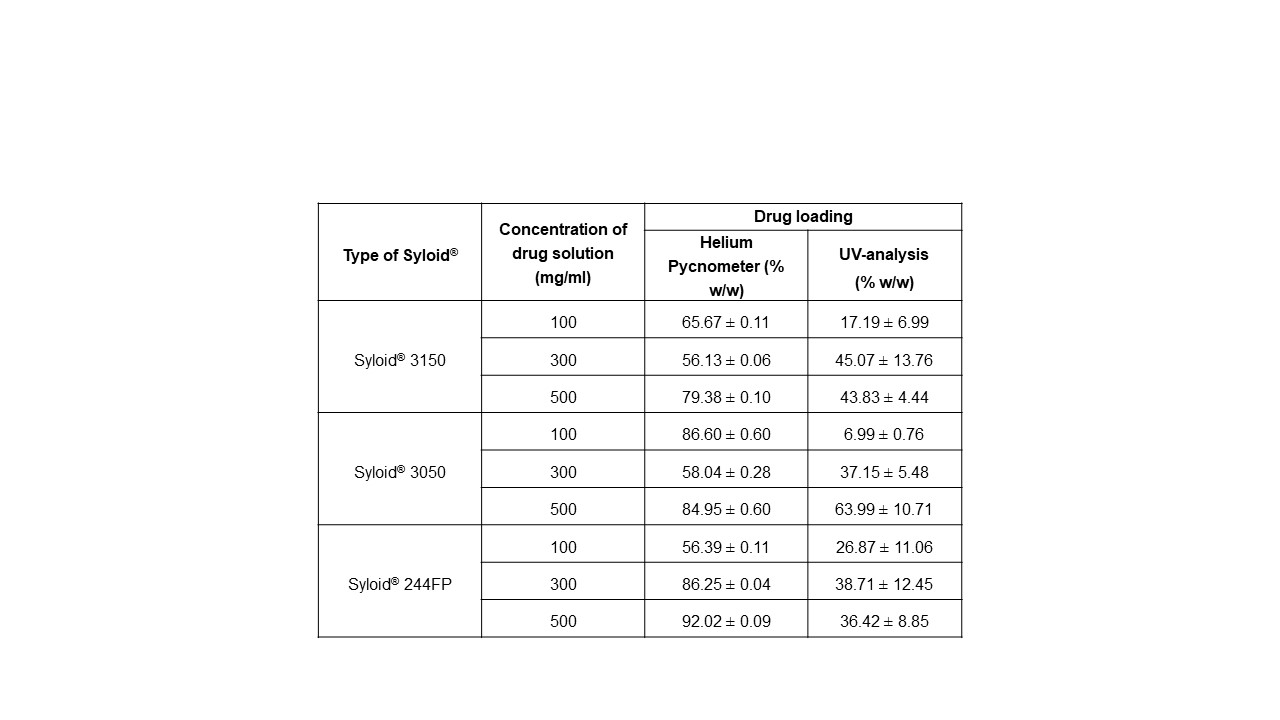