Purpose: Amorphous solid dispersion (ASD) is an enabling formulation strategy that can be used to generate supersaturation in the GI tract, potentially overcoming bioavailability limitations of solubility limited compounds. However, for this strategy to be successful, the ASDs must be able to (1) generate supersaturation and (2) maintain supersaturation. While it is well known that ASDs with low drug loading can dissolve almost completely and generate supersaturation, at higher drug loadings, not only the release rate but the extent of dissolution is reduced due to phase separation and crystallization in the gel phase during ASD dissolution. Since moisture sorption leads to both decreased drug solubility and increase polymer mobility, ASDs which are stable in the solid state may undergo phase separation in timeframe of minutes during dissolution, leading to preferential release of the polymer rich phase and thus compromising the drug release. Here, we develop a mechanistic model for analyzing the release profile of ASDs considering gel layer development due to water penetration and polymer erosion as well as the diffusion and precipitation of drug in this gel layer. We show the impact of different parameters on gel layer development and on the extent of drug release.


Methods: The mechanistic model analyzes the diffusion of both water and drug in a spherical matrix of initial radius R0 with the outer moving boundary (S) representing the net effect of volume increase due to swelling and volume decrease due to constant surface erosion rate. Whereas the inner gel layer boundary (R) defines the glassy-rubbery transition boundary due to water absorption, obtained from the position where the water content reaches some critical water volume fraction. Drug precipitation is assumed to occur only in the gel layer and the moisture content is coupled to the drug diffusion via a Fujita-type diffusion coefficient. The moving boundary problem is transformed to a fixed boundary problem using immobilization technique and solved on COMSOL using approximate parameters for ASDs based on PVPVA and HPMCAS.

Nifedipine was used as the model drug. USP II dissolution studies of 40% NIF-PVPVA and 40% NIF-HPMCAS were performed. Nonsink condition was employed to prevent dissolution of crystals formed in the gel phase. However, dissolution was performed below the critical supersaturation, a regime where desupersaturation by crystallization was not observed in the initially supersaturated solution. Effectively, this range allowed the investigation of drug release from ASDs without significant interference from crystallization in the solution state. ASD samples were prepared by bench scale hot melt extrusion (HME), ground, and then sieved to different size fractions. At selected time points, dissolution media was withdrawn and filtered for analysis of NIF and polymer concentrations. NIF concentration was obtained by UV-vis, PVPVA concentration was obtained from absorption at 500 nm after mixing with the triiodide reagent, HPMCAS concentration was obtained from phenol colorimetric assay. To prevent crystallization during storage, samples were analyzed within the induction time. Gel layer development and presence of crystals were monitored by polarized light microscopy.


Results: In vitro dissolution results revealed that the drug release from NIF-PVPVA showed fast initial release followed by slow later release. During the initial release, the polymer released preferentially while in the later phases after slowing down of polymer release, more drug was released. This suggests that in the early phase, due to kinetics of phase separation, drug release was mainly from the polymer rich phase while in the later phase, drug release proceeded primarily by erosion of the drug rich scaffold. The smaller ASD particles experienced not only faster, but also more congruent (higher polymer/drug % ratio) and complete release during the early polymer rich phase (Figure 1). Dissolution of HPMCAS based ASD showed slightly different trend as dissolution of drug and polymer was almost congruent for the entire duration. No significant particle size dependence was noted (Figure 1).

Modelling results show that the observed differences in the extent of drug release (Figure 1) during the initial preferential polymer release stage can arise solely by changing gel layer development (Figure 2). HPMCAS has slower water penetration compared to erosion rate, leading to the development of a thin gel layer. This subsequently reduces the time between initial hydration and erosion, which limits the time available for phase development. Ultimately, this increases the fraction released with the erosion of polymer rich region.


Conclusion: This study shows that reducing the particle size may be a way to significantly increase extent of drug release for some ASDs. More interestingly, the modelling results provide some insight into why enteric polymers such as HPMCAS may be suitable for high drug loading formulations. These polymers generally have slower swelling front penetration and relatively fast erosion leading to thin gel layers. Ultimately, an understanding of the parameters involved in gel layer development may provide insight into the selection of polymers for formulating ASDs with high drug loading. 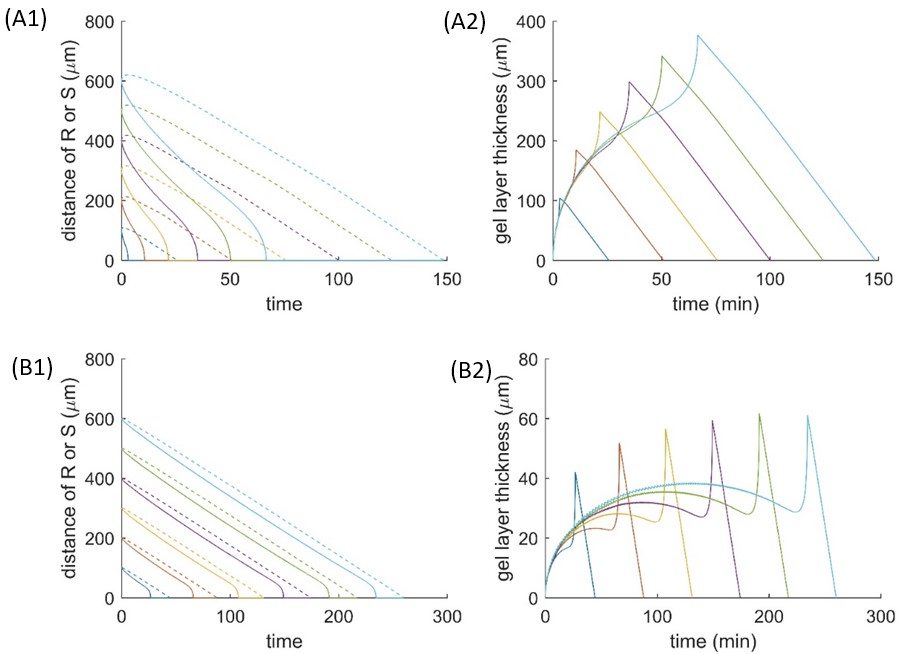