Purpose: The aim of the present study was to examine the effect of natural products on P-gp (P-glycoprotein) that has the potential to interact with various drugs. Since P-gp is one of the important mediators of multi-drug resistance in chemotherapy and drug-drug interaction in combination therapy, the potential effects of certain drug on P-pg when the drug is commonly co-administered with other drugs or foods need to be studied. Furthermore, interactions between natural products and drugs should be also evaluated as the consumption of health supplements derived from natural products has been increased. Therefore, the assessment of their effect on P-gp is important to prevent the potential herb-drug interactions which could cause harmful adverse effects.


Methods: P-gp inhibition effects of 20 compounds derived from the natural product were evaluated by MDR assay kit using Caco-2 cells. Hank's balanced salt solution (HBSS) and verapamil were treated as positive and negative control groups, respectively. Based on the MDR screening results, R. acetosa was selected as a model plant, which contains chrysophanol-8-O-β-D-glucoside and emodin. To determine effect of P-gp inhibition, rhodamine 123 accumulation amount was measured using CaCo-2 cell. Concentration levels of Rumex acetosa (R. acetosa) extract were 12.5, 25, 50, 125, 250, 500 μg/mL. Cyclosporin A was used as a positive control at a concentration of 100 μM. Fluorescence intensity was detected with microplate reader at wavelength of 500 nm for the excitation and 550 nm for the emission. Fexofenadine was selected as a P-gp substrate to determine the inhibition effect on absorption. Because fexofenadine is metabolized only about 5% of the dose and is known to be a good substrate with the characteristics that 11% of its dose excreted to urine and 80% to feces in unchanged form. Fexofenadine uptake test was performed using OATP1A2/SLCO1A2 transfected HEK293 cells with LC-MS/MS. Fexofenadine of 15 μM was treated with drugs containing R. acetosa extract of 1, 5, 10, 50, 100, and 500 μg/mL. Terfenadine was selected as an internal standard for quantitative analysis. In animal study, all rats were orally administered with a single dose of 10 mg/kg fexofenadine in 10% ethanol. After 30 min, 11 mg/kg emodin, 0.1 g/kg R. acetosa extract, and vehicle suspended in 0.5% carboxymethylcellulose were treated to rats orally. Plasma concentration of fexofenadine was determined by LC-MS/MS.


Results: On the MDR test, chrysophanol-8-O-β-D-glucoside and emodin treated groups showed higher fluorescence intensity than that of the control group with a value of 122% and 147%. These results suggest that chrysophanol-8-O-β-D-glucoside and emodin affect the uptake of the fluorescent dye through P-gp inhibition. The accumulation amount of rhodamine123 as a P-gp substrate in Caco-2 cells represented the P-gp inhibition effect. The significant inhibitory effect was detected in the R. acetosa extract groups at concentrations of 250 and 500 μg/mL with the values of 154.4 ± 7.9% and 183.8 ± 10.5%. In uptake test, the content of fexofenadine in OATP1A2/SLCO1A2 transfected HEK293 cells after treatment of R. acetosa extract was significantly decreased at concentrations of 10, 20, and 50 μg/mL.. These data suggest that R. acetosa extract could affect the absorption of fexofenadine through the inhibition of OATP1A2. In the animal study, the area under the plasma concentration–time curve (AUC) of fexofenadine was 222.0 ± 92.1 ng∙h/mL in the control group, and 411.9 ± 189.1 ng∙h/mL in the co-administered group of emodin. The fexofenadine AUC of co-administered groups with R. acetosa extract was decreased with the values of 53.6 ± 12.8 ng∙h/mL at a dose of 0.1 g/kg.


Conclusion: In this study, the degree of P-gp inhibition of the active ingredients extracted from natural products was determined through MDR screening test. Chrysophanol-8-O-β-D-glucoside and emodin showed P-gp inhibitory effect. Based on the MDR screening results, R. acetosa was selected as a model plant, which has been widely used in folk remedies for gastrointestinal disorders and cutaneous diseases. P-gp inhibition effect was detected on the high concentration of R. acetosa extract. In low concentration, it worked as a OTAP inhibitor. In the animal study, the P-gp inhibitory effect was detected in emodin co-administered group with an increase of the fexofenadine AUC without changing Tmax. The result was consistent to in vitro MDR screening test. The data indicate that emodin inhibit P-gp and increase the absorption of fexofenadine. However, the plasma levels of fexofenadine in the R. acetosa extract treated group were lower than those of vehicle treated group. It might be due to its OATP inhibitory activity and low contribution of P-gp inhibitory effect to fexofenadine absorption in vivo. 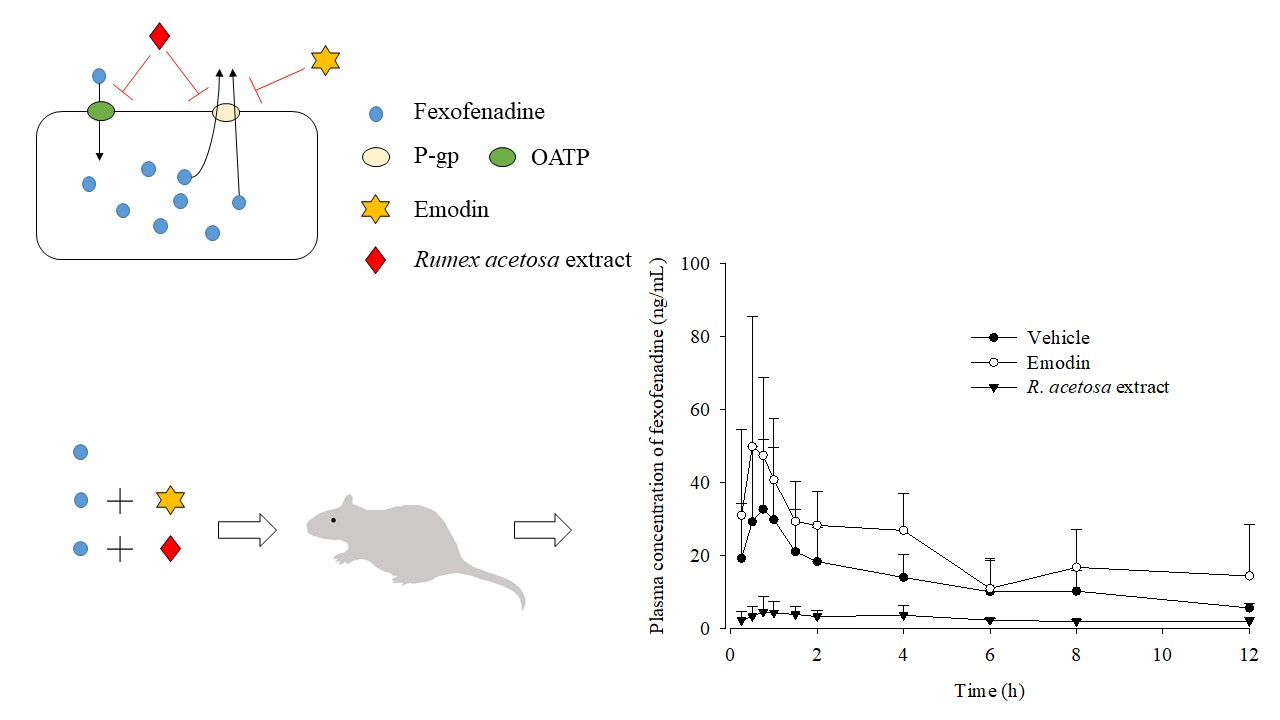