Purpose: Doxazosin is a drug commonly used as antihypertensive agent in the treatment of enlarged prostate and high blood pressure. It is commonly marketed in its mesylate salt form (C23H26N5O5+.CH3SO3-) which is considered a class II drug according to Biopharmaceutics Classification System (BCS).1 Doxazosin mesylate (DM) presents almost 20 polymorphs claimed in patents and articles using mainly powder X-ray diffraction technique as a characterization tool. Only two DM crystalline structures were determined using high resolution synchrotron powder X-ray diffraction: an anhydrous form (DMA) and a dihydrate form (DMH).2 Recently, the structure for the doxazosin free base was reported using single crystal X-ray diffraction.3 In this context, despite a huge number of polymorphs described in the literature, scarce knowledge is available about the crystal structure and conformation of doxazosin molecule. In this study, we used quantum chemistry calculations to assign specific spectral regions in the infrared and Raman spectra characteristic of distinct conformers of doxazosin molecule.


Results: Figure 1 presents the DFT optimized geometry for the doxazosin conformers obtained from the molecule geometry in crystalline structures DMA and DMH. In the dihydrate form (DMH) the doxazosin is found in trans conformation whereas in anhydrous form (DMA) the doxazosin is found in cis conformation.2 The optimized conformers structures have an energy difference of ~ 1 KJ/mol (cis conformer being more stable) and the dihedral angle due the rotation of benzodioxan rings (indicated by asterisks in Figure 1) are 2 ° e 177 °, respectively, for cis and trans conformers.

Figure 2 shows the X-ray diffraction patterns for two distinct DM polymorphs, Forms I and III. It is worth mentioning that Form I is the same as DMA polymorph, but Form III is a polymorph distinct than DMH. The experimental infrared spectra for both Forms I and III as well as calculated spectra for doxazosin conformers are presented in Figure 2. The comparison between experimental and calculated spectra allows to conclude that Form I is composed by cis conformer whereas Form III is composed by trans conformer. We also found a fingerprint region in Raman spectra for classification of doxazosin conformation and we verified that in the amorphous phase of DM the doxazosin molecule is found in a mixture of cis and trans conformations (results not shown).


Conclusion: In this study DFT calculations were used to find a vibrational spectral fingerprint for conformational assignment of doxazosin molecule. It will allow the investigation of doxazosin conformation in other DM polymorphic forms. These results highlighted that vibrational spectroscopy along with quantum chemistry calculations can be used as an alternative to structural determination by X-ray diffraction in order to characterize the API conformation. 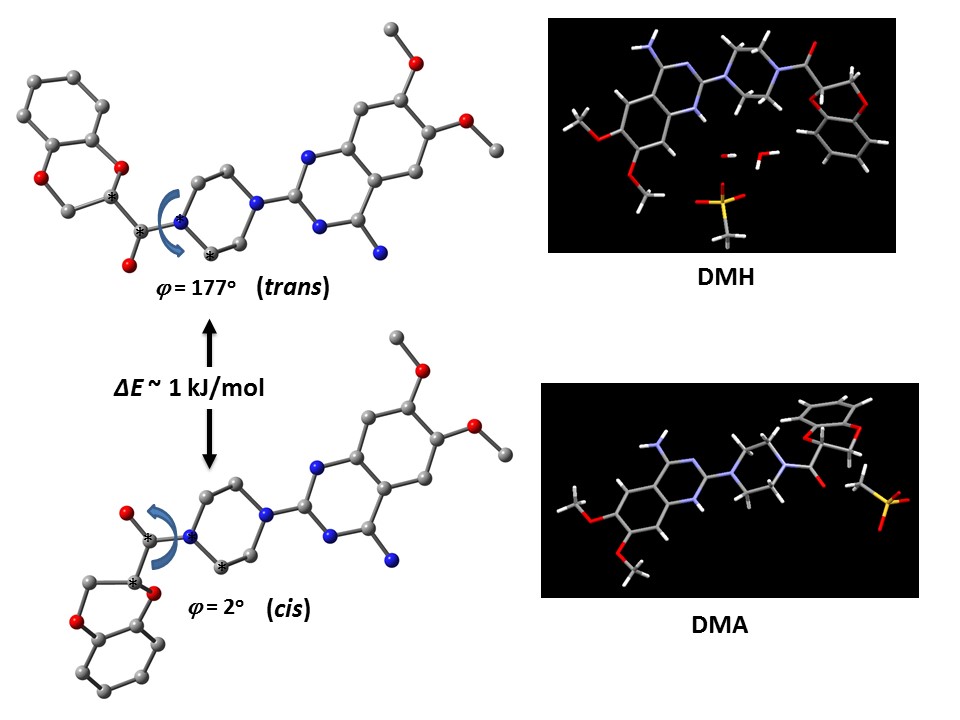 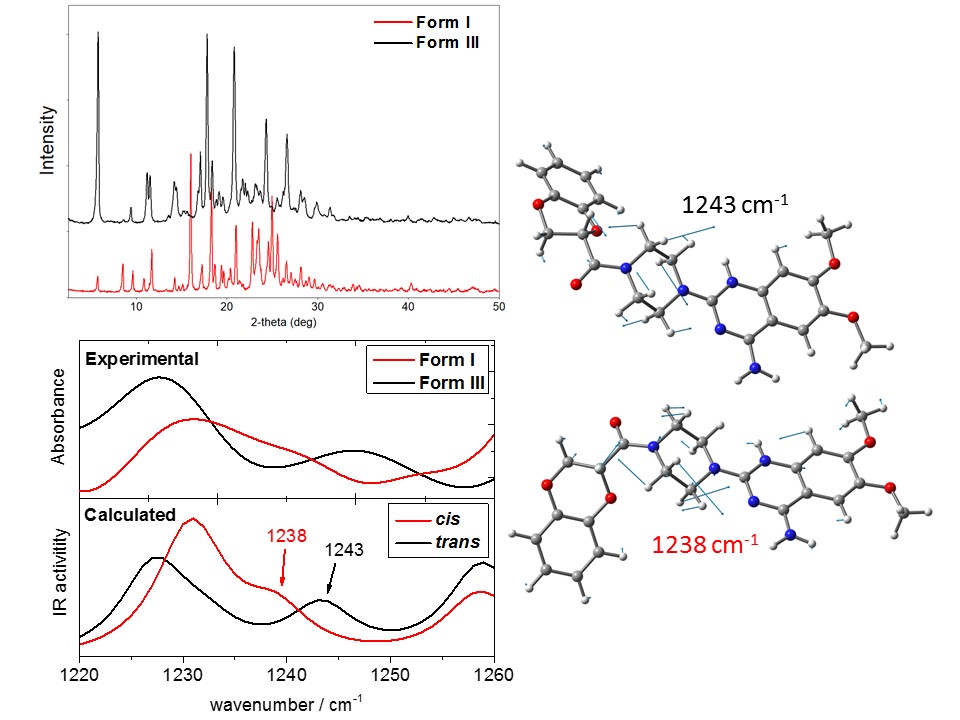