Purpose: Two-third of the NCEs exhibit poor drug solubility and variable drug absorption. Amorphous solid dispersion (ASD) is a widely used technique to improve drug water solubility. In this study, ASD of a poorly water-soluble drug, Itraconazole, was prepared with different grades (LG, MG and HG) of Hydroxypropyl methyl cellulose acetate succinate (HPMCAS) by hot-melt extrusion (HME) using Poloxamer 407 (P407) as a plasticizing agent and drug release enhancer. Then, effects of HPMCAS grades and particle size of extrudates on drug release from ASD and supersaturation of dissolution media were determined.


Methods: The film-casting technique was applied to determine drug-polymer and drug-surfactant-polymer miscibility and rheology was applied to determine melt viscosity of polymers and its mixtures for their extrudability. Different formulations containing drug-polymer and drug-surfactant-polymer mixture were extruded using a twin-screw extruder at 160˚C. The extruded filaments were then milled and screened to three fractions of 45-212μm, 425-600μm and 850-1180μm and used for dissolution. Physical stability of milled filaments was evaluated after exposure to 40°C/75% RH for 1 month, where differential scanning calorimetry (DSC) and powder X-ray diffraction (PXRD) were used to determine whether there was any drug crystallization during storage. Dissolution studies were conducted using the USP Dissolution Apparatus-II at 37˚C in 250 mL of 0.1N HCl (pH-1) for 2 h and then changing pH to 6.8 for additional 2 h of dissolution testing.


Results: The film-casting study showed miscibility of itraconazole up to 20% w/w in binary mixtures with all three grades of HPMCAS (LG, MG and HG). However, when the surfactant was added to prepare drug-surfactant-polymer ternary systems (20:20:60 w/w), there was miscibility with HPMCAS-LG and HPMCAS-MG, but not with HPMCAS -HG, where the film showed crystallization of drug by polarized light microscopy. All three grades of HPMCAS exhibited high melt viscosity in the temperature range of 130 to 180°C, which was higher than the extrudable viscosity range of 1,000 to 10,000 Pa.s for melt extrusion (Fig-1). The viscosity of different grades was comparable, although the viscosity of HPMCAS-HG appeared to be somewhat lower than the other two at >150°C. The viscosity decreased with the addition of drug and there was further decrease in viscosity when the surfactant was also added. The ASD formulations of drug-surfactant (20:80 w/w) and drug-surfactant-polymer (20:15:65 w/w) mixtures could be extruded at 160°C. Figure-2 and Figure-3 shows drug release from milled filaments of Itraconazole-HPMCAS and Itraconazole-P407-HPMCAS mixtures respectively, where all three grades showed pH dependent drug release. The drug release from the 3 grades was in the order of LG >MG >HG, where there was practically no supersaturation of drug at pH 6.8 from ASD with HPMCAS-HG. The drug release was also influenced by particle size, with progressively decreasing drug release with the increase in particle size. Without P407, only milled filaments containing HPMCAS-LG having the particle size of 45-212μm showed complete drug release. Incorporation of P407 enhanced the dissolution rate providing complete drug release with HPMCAS-LG & MG, using even granular particles. 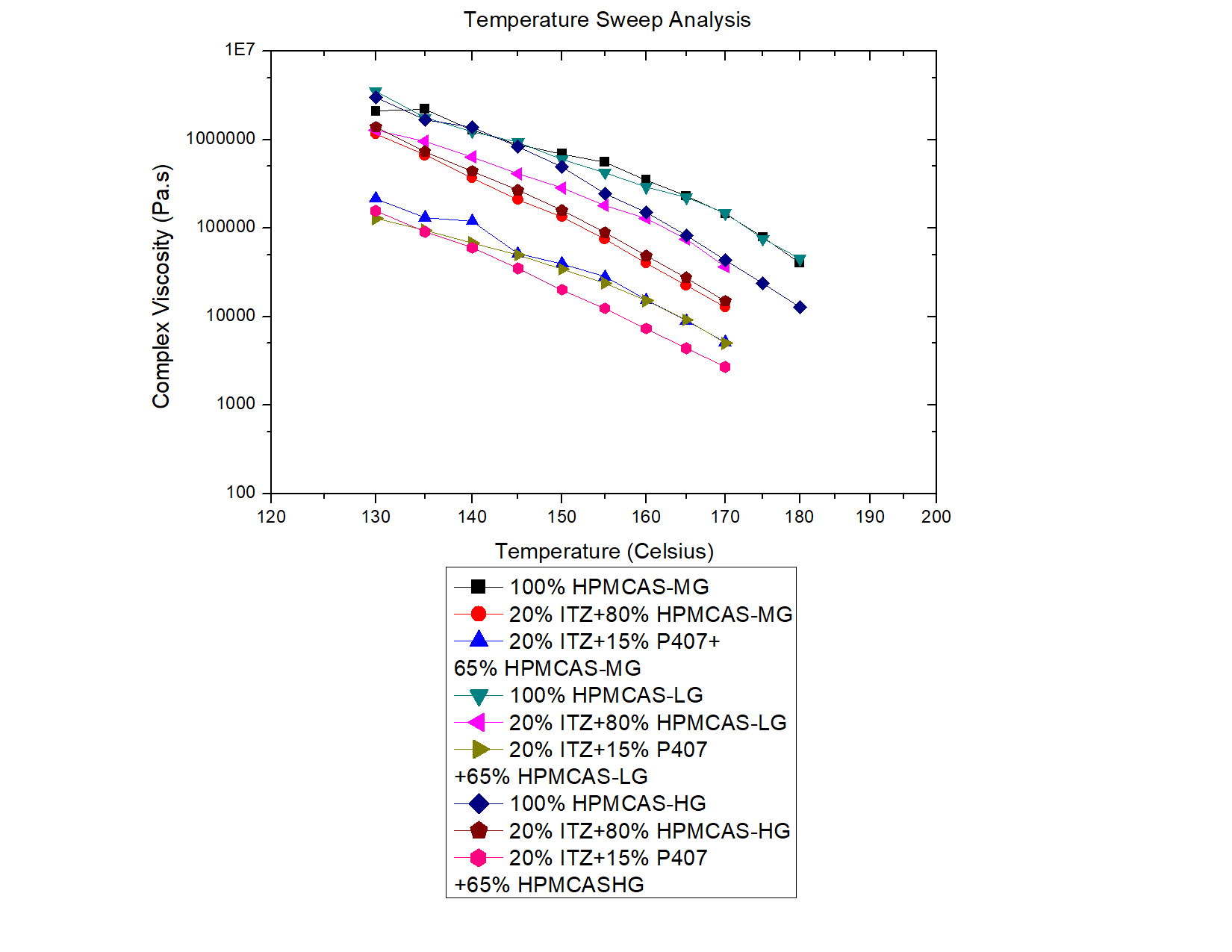 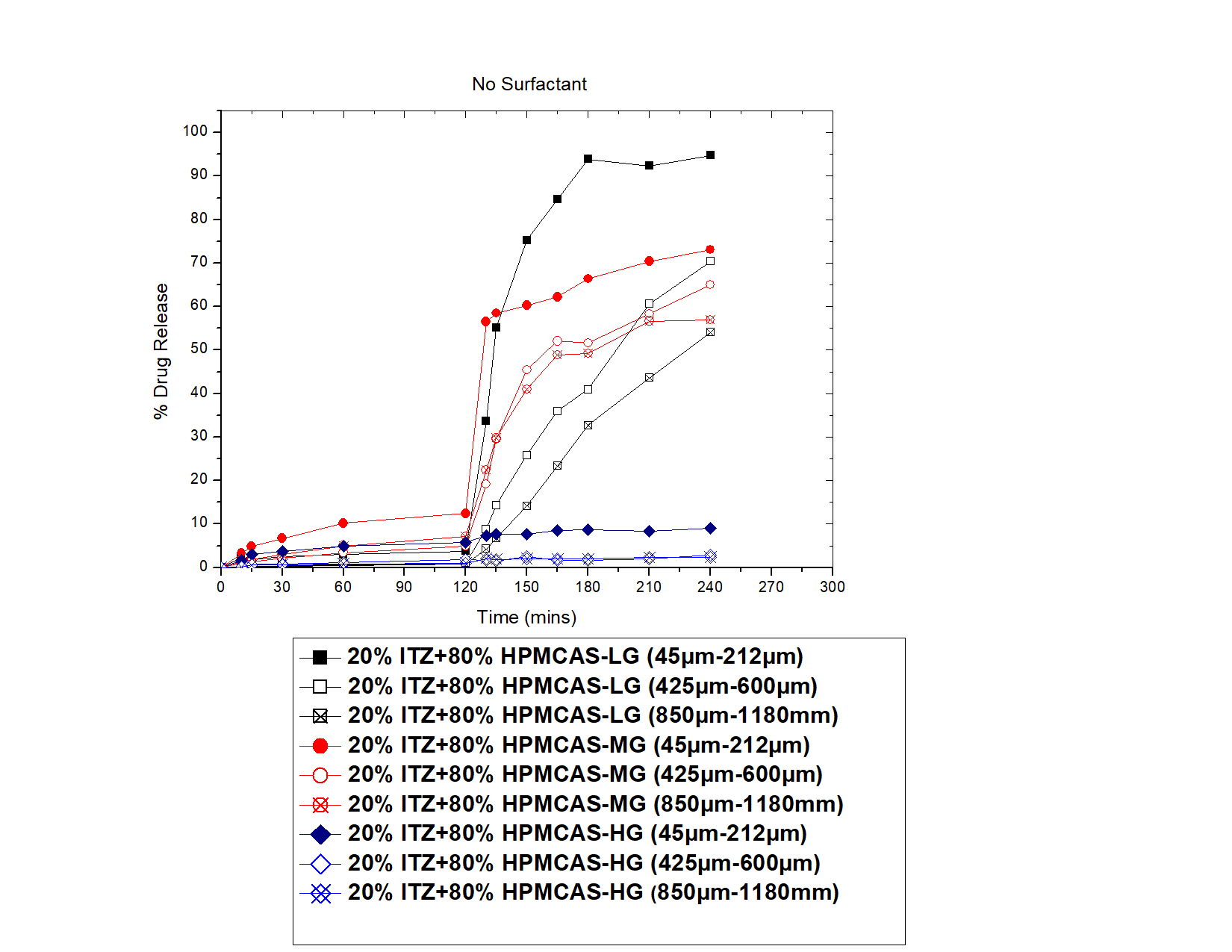 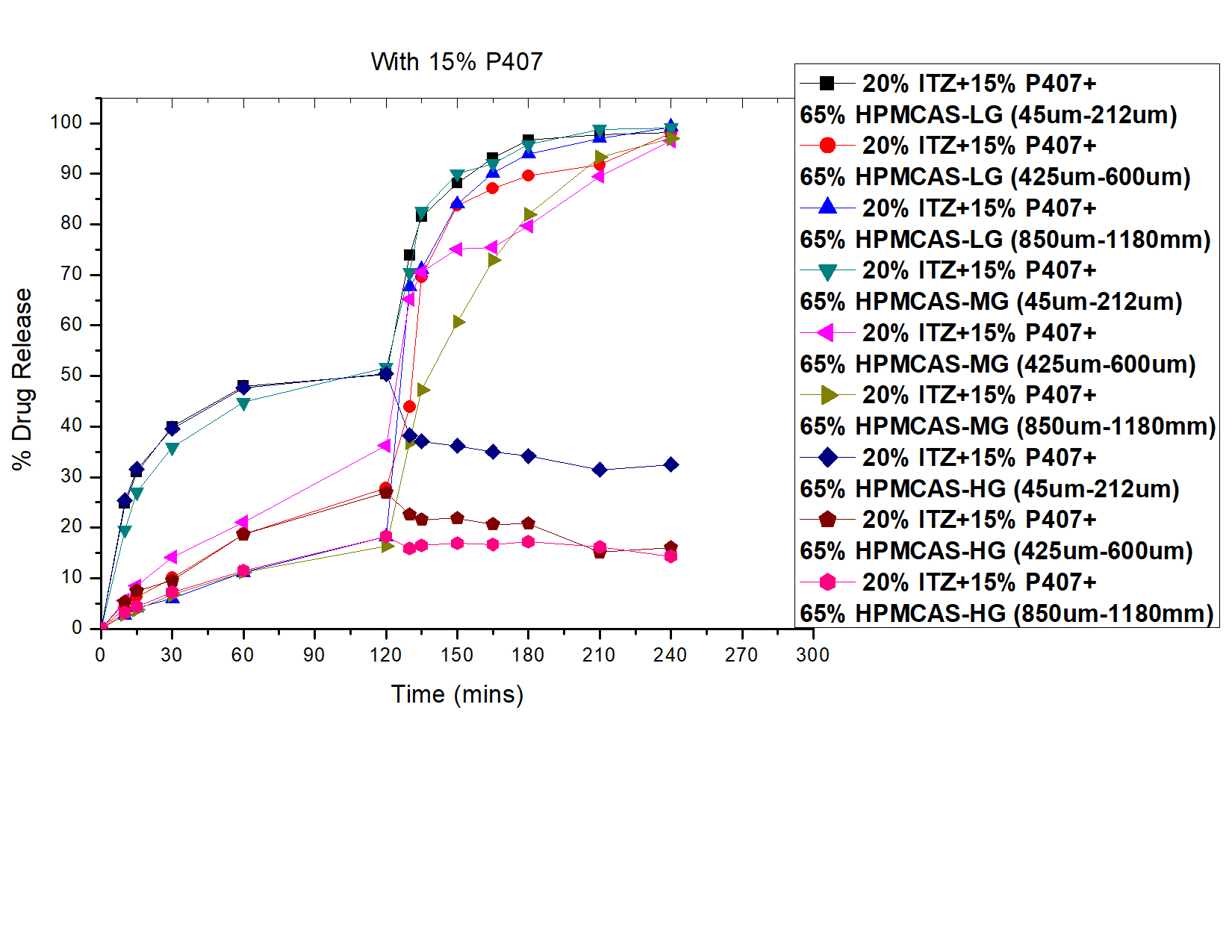