Purpose: One of the major clinical limitations of topotecan injection (HYCAMTIN), which is an approved treatment for ovarian and other cancers, is the rapid clearance from plasma although its growth inhibitory activity has been reported to depend on exposure time. Additionally, myelosuppression is another problem for clinical use of HYCAMTIN (Ref.1). To overcome these issues, liposomal topotecan, FF-10850, has been developed to maximize the tumor exposure to the cytotoxic effects of topotecan while minimizing bone marrow toxicity. The enhanced permeability and retention effect may contribute to deliver FF-10850 to tumor tissue (Ref.2). The objective of this study is to conduct the model-based quantitative analysis for the effect of encapsulation of topotecan into the liposome on the safety window.


Methods: The anti-tumor potency of FF-10850 against ES-2, an ovarian cancer cell line, proliferation was investigated using xenograft mice model. The myelosuppression was also evaluated in conventional rat toxicity studies. The pharmacokinetic (PK)-pharmacodynamic (PD) models were constructed using Phoenix Winnonlin software version 6.4 to recover the changes in tumor volume in xenograft mice and serum neutrophil count in rats following injections of FF-10850 and topotecan. FF-10850 was injected intermittently at the doses per injection from 0.25 to 2.0 mg/kg, whereas topotecan was injected once daily at the doses per injection from 1.0 to 2.0 mg/kg. The cell kill kinetic model (Ref.3) for tumor growth and Friberg model (Ref.4) for neutrophil were linked with the PK model, which included both encapsulated and released drugs (Ref.5).


Results: Sequential PK-related parameter optimization was performed. A two compartmental model was applied to describe the disposition of released topotecan. After determining these parameters, liposome-related parameters, such as drug release rate constant, were optimized. Observed and model-simulated plasma concentrations of encapsulated and released topotecan were closely matched in mice and rats. No saturable process was required to capture the plasma concentration time profiles.

On the other hand, the entire time course of neutrophil count following injections of FF-10850 and topotecan can be captured well when the released topotecan in the systemic circulation directly inhibited the cell proliferation. The model simulated neutrophil counts at the nadir and end of experiment following single administration of FF-10850 at the dose of 1.0 mg/kg were 0.65 and 1.60 million cells/mL, respectively, which were comparable to observed data (0.75 +/- 0.42 and 2.54 +/- 1.25 million cells/mL). This model was widely applicable between dosing regimens and experiments, suggesting that topotecan release in bone marrow would be negligible.


Conclusion: The sixteen-fold accumulation to tumor following administration of FF-10850 compared to non-liposomal topotecan was required to recover the inhibitory potency of FF-10850 on tumor growth, whereas no apparent drug release in the bone marrow was necessary to reconstruct the decreases in neutrophils. In conclusion, these model based quantitative analyses revealed that the encapsulation of topotecan into the liposome can widen the safety window by 16-fold. 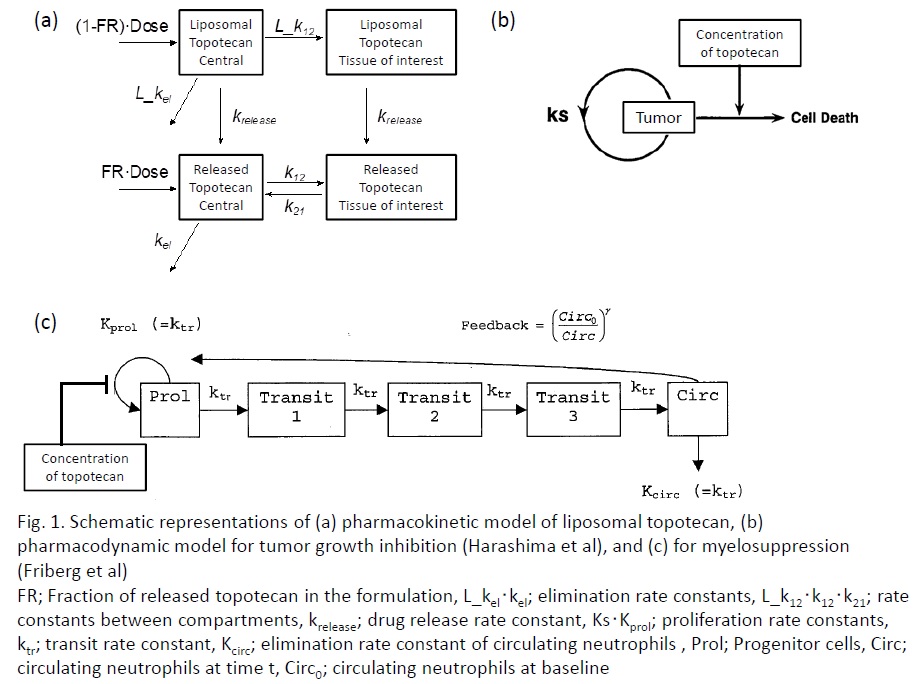 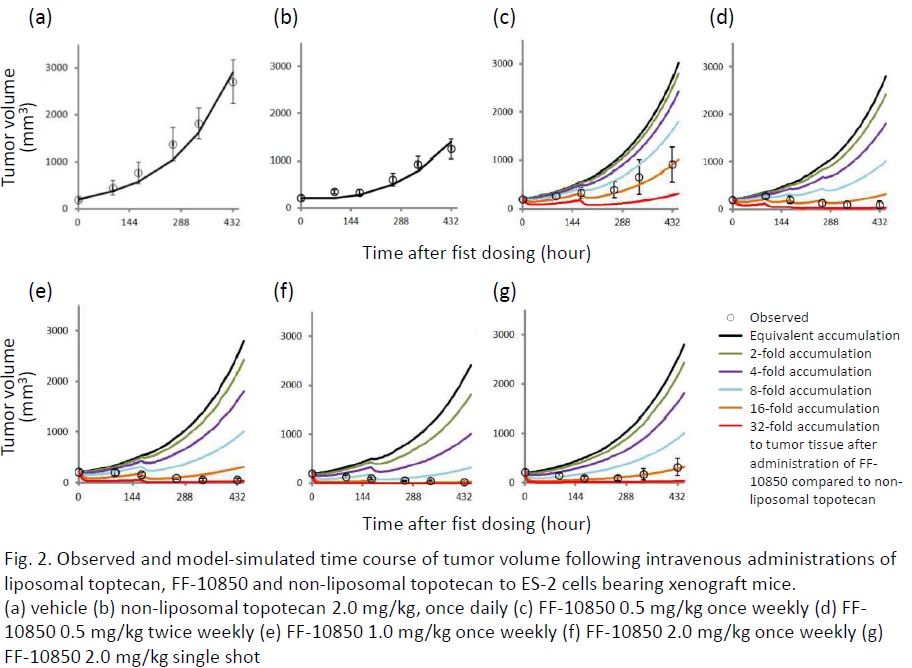 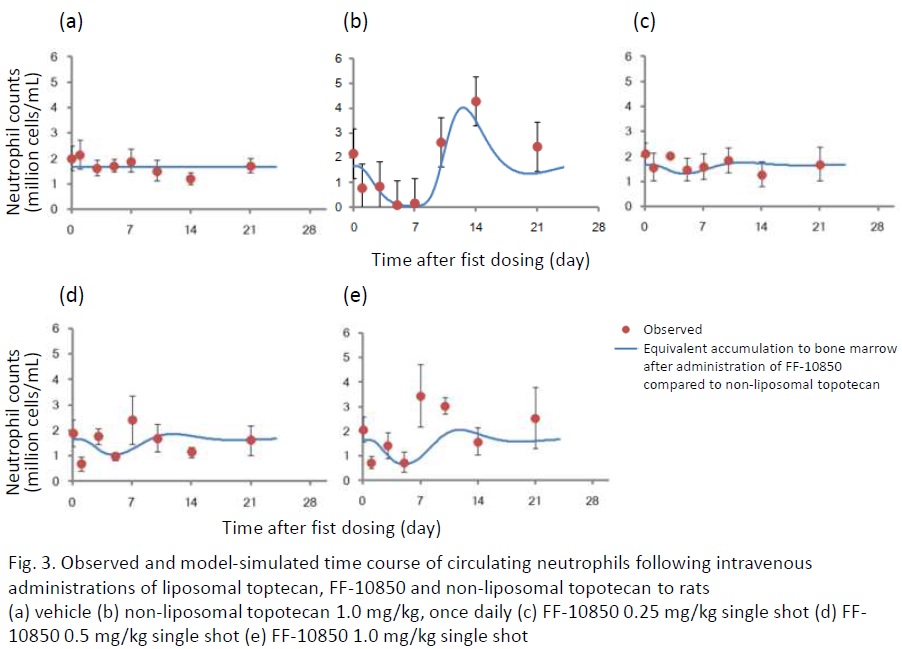